This strange marker stone can be found on the grass verge where Stonecross Road meets Milnthorpe Road. As place names in this area suggest: Stonecross Manor, Stonecross Road....there was most likely a roadside preaching cross somewhere in this area. All that now remains is this small marker stone, buried in the undergrowth at the road side. 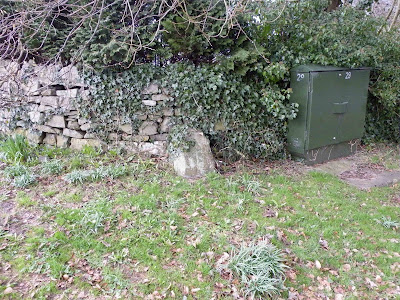 This cross was still in existence in the 16th century, and was one of a number of crosses that could be found on the roads into town, where travellers would stop to offer a prayer before setting off on their journeys. 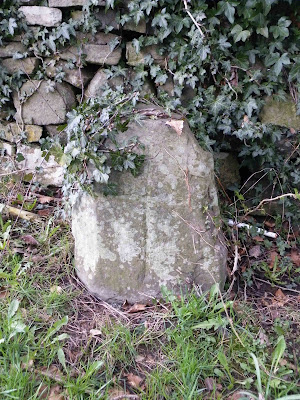 Maps of 1860 and 1890 do not show this cross, so it must have vanished sometime between the 16th and 17th centuries.
Posted by The Cumbrian Castle listing. at 20:54 No comments:

Although the monument shown here is not the original market cross, the site is occupied by a war memorial, and probably therefore earns its place here. The memorial is situated at the junction of Queen Street and Daltongate, and stands where a cross dating to before 1577 once stood. 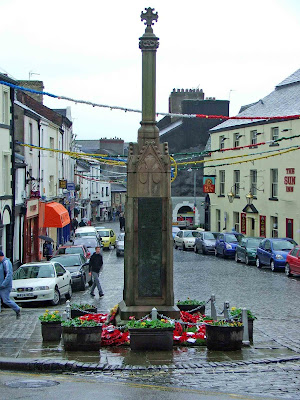 Some older maps of Ulverston show the market cross on in the middle of the market place, but we know that at some stage it was replaced with an obelisk of some sort. This was removed in 1882 and replaced with a lamp post (!) 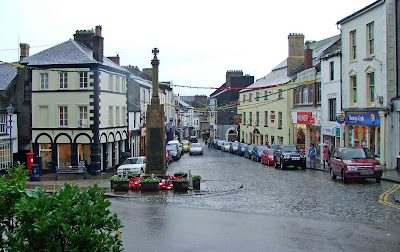 The last known site of the cross, or its replacement obelisk, is now marked by the memorial to the two World Wars.
Posted by The Cumbrian Castle listing. at 20:27 No comments:

Sadly there is no cross standing at this point any more, but the sign high up on the wall, along with the place name give some indication of the history attached to this location in town. The house and entrance to yard 109, can be found opposite the Westmorland and Lonsdale Conservative offices on Highgate, about a quarter of a mile South of the town hall. 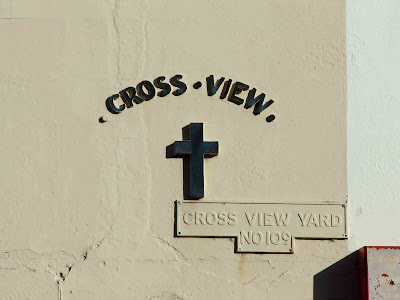 It's likely that there would have been a cross here, either in the road or at the roadside, and that funeral processions, on their way to the parish church to the South, would have paused for prayers for the deceased. 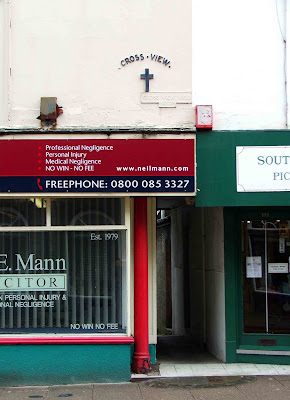 As with most of Kendal's market and preaching crosses, it was removed at some point during the 19th century, dismantled and the stone used for allegedly used for building a wall.
Posted by The Cumbrian Castle listing. at 21:33 No comments:

The Ca Steen, often referred to as the Cauld Stone (Calling Stone), the Cold Stean or the Coall Stone, is embedded in the West face of Kendal Town Hall. This huge grey, rounded piece of stone is probably all that remains of Kendal's huge market cross. I would imagine that the stone is now upside down, and, if exposed again, would have a socket on its underside, into which the cross would have been placed. 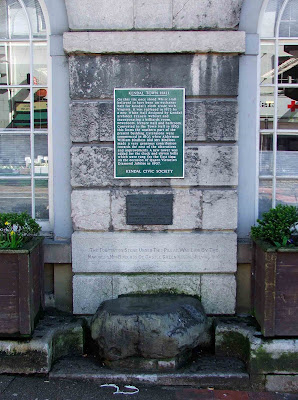 It is buried beneath the foundation stone laid in 1893 when the Town Hall was being built. The market cross was originally in the centre of Strickland Gate at the head of the Market Place. It was moved from this location, possibly in 1765, to enable the free flow of traffic up and down the streets, the cross disappearing, and the base finding its home here. 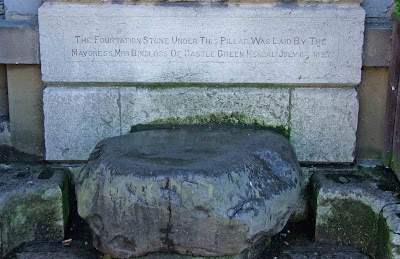 The stone has traditionally been the focal point for local and national announcements. Famously, it was from here that, in 1715, as Brigadier Mackintosh and his Highland soldiers rode into Kendal in the pouring rain, that the Jacobites proclaimed James III king. These days, it doesn't seem to get any attention from passers by at all.
Posted by The Cumbrian Castle listing. at 21:00 No comments:

The church of St James, Ormside Hall and the remains of a preaching cross, lay just to the north of the tiny hamlet of Great Ormside. 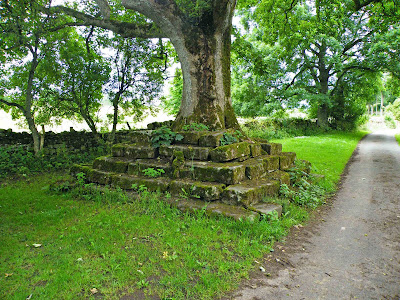 This Grade II listed monument lays at the side of the road that runs up the church. 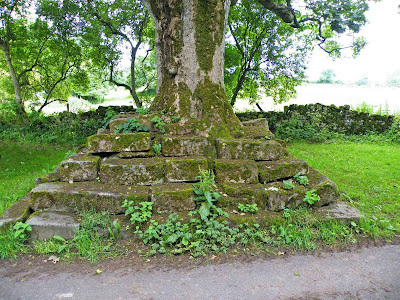 This is thought to be late medieval in date, and consists of a stepped base minus the cross. Local tradition has it that the cross itself was destroyed sometime during the Commonwealth, and the base dismantled. When Charles II was restored to the throne, the base was returned to it's original position and a sycamore tree planted in the centre to replace the lost cross.
Posted by The Cumbrian Castle listing. at 20:38 No comments:

This is another Grade II listed market cross, this time situated in the market square in Milnthorpe, just off the A6. 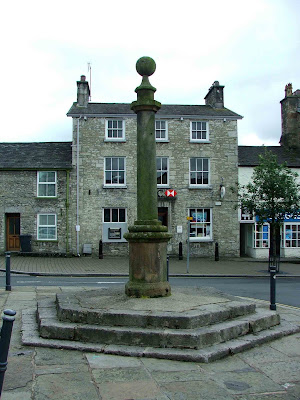 Both the shaft and base probably date from the 18th century, whilst the top portion possibly dates from the 13th century (or is at least an early repair or replacement) Local records make mention of the 'new cross' in 1823, possibly referring to the new base and shaft. In 1845, the whole cross was taken down and mounted on top of a lock up that was built on this site, used for securing criminals. The lock up was removed in 1862, and the cross mounted on the ground again.
Posted by The Cumbrian Castle listing. at 23:28 No comments:

This Grade II listed cross sits to the North West of Edenhall church. 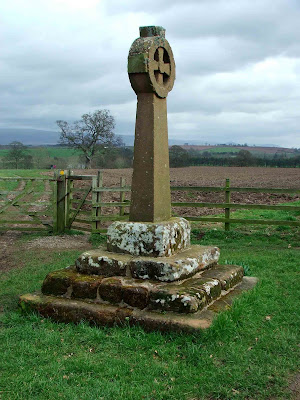 The cross shaft, and the wheel-head, date from the 19th century, whilst the stepped base is roughly medieval.
Posted by The Cumbrian Castle listing. at 23:18 No comments:

This Grade II listed cross can be found at the junctions of Mill Brow and Horse Market, a few yards South East of the church. 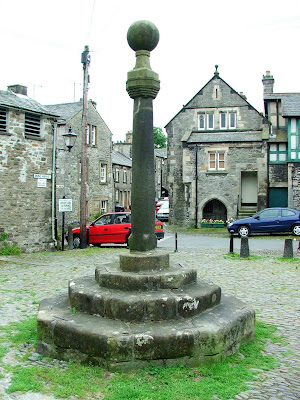 The medieval cross shaft and stepped base, originally stood at the junction of Main Street, Market Street and Mill Brow, a hundred yards or so to the West, but was moved to its current location in 1822. The ball finial would most likely have been mounted on the top of the shaft at this point.
Posted by The Cumbrian Castle listing. at 23:15 1 comment:

Situated in Parliament Square between Lawnmarket and the High Street, the cathedral of St Giles is only about a quarter of a mile to the East of the castle. As is usually the case with a well established church or cathedral, there are records stating that there was a parish church in as early as 854AD. A dedication to the Bishop of St Andrews is documented as taking place on the 6th of October 1243, with the church being consecrated in the name of St Giles….the patron saint of . A building on this site was founded sometime during the 1120’s, probably by David I, and there are thought to be a few remaining traces of this early structure in the present day cathedral. By 1385, the church was damaged by fire, but it seems that repairs were quickly made. 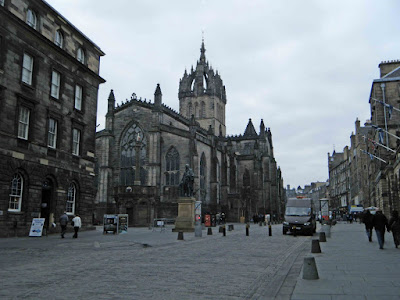 Above. View of the Cathedral looking West towards Lawnmarket.

In 1559, John Knox was elected a Minister of Edinburgh. He was a reformist and very much anti-Royalist, being well known for his abhorrence of a female monarch. His debates and arguments with and against Mary Queen of Scots are well documented. He was the Minister at St Giles until 1572. During Knox’s minster ship, the was well used by the local population, not just as a church or place of worship. Knox seems to have instigated an early form of community centre, with the church housing a police station, fire station, a school and even a prison for ‘harlots and whores’. The church was even used by the General Assembly of the Church of Scotland and the Scottish Parliament and Edinburgh Town Council met there too. Because of Knox’s Protestant leanings, Queen Mary probably never attended any services at St Giles, probably preferring to celebrate mass in private at Holyrood House when she was in residence in . She probably, however, attended Parliament when it met at St Giles. 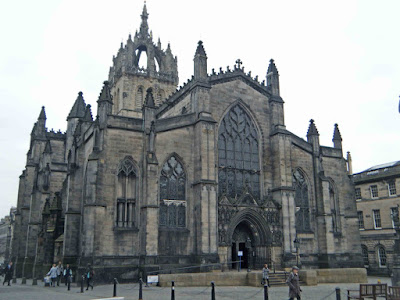 Above. The West end of the Cathedral, looking towards High Street.

In 1633 King Charles I assigned Scottish Episcopal bishops to , with William Forbes becoming the first Bishop of the Dioceses of Edinburgh. St Giles became ’s Cathedral in 1635. It retained is Cathedral status until 1638, and held that title again from 1661 until 1689. 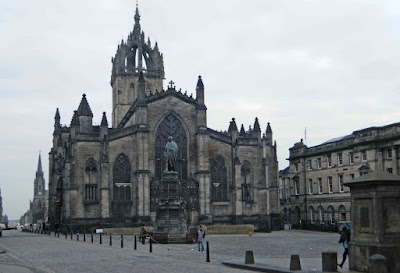 Above. Another view of the West end of the Cathedral.

In 1911, the Thistle Chapel was built, dedicated to those who are endowed as Knights of the Thistle, ’s order of chivalry. In 1977 a major refurbishment project was undertaken, with roof, stone and window repairs taking place. A new organ was installed and the crypts were converted for use as meeting rooms and cafes. Admission to the cathedral today is free, although a donation is requested to pay for the upkeep of the building. Check the official web site for more information.

Posted by The Cumbrian Castle listing. at 21:58 No comments:

Here are photos of some of the stained glass windows at St Cuthbert in Aldingham. 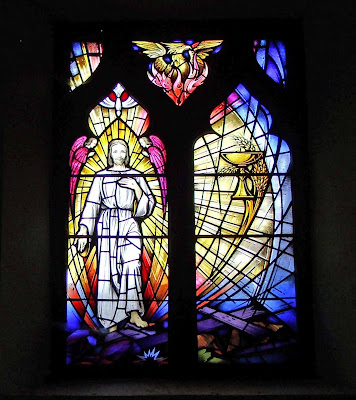 Above. I imagine that this window depicts symbolic aspects of the resurrection. Note the Phoenix at the top of the window, and the fallen cross in the bottom right hand corner. By Shrigley and Hunt. 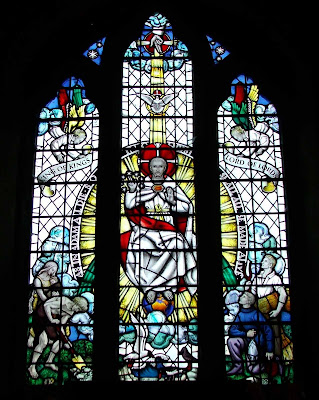 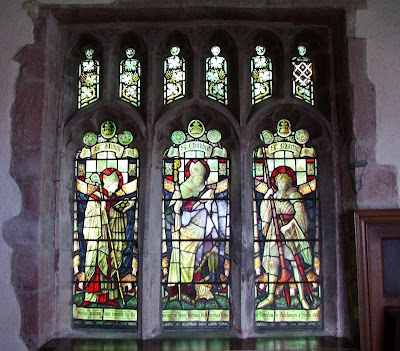 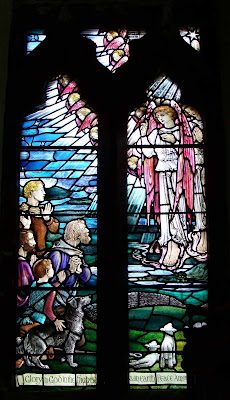 Above. The Nativity announced to the shepherds, by Veronica Whall (1934)
Posted by The Cumbrian Castle listing. at 19:10 No comments: 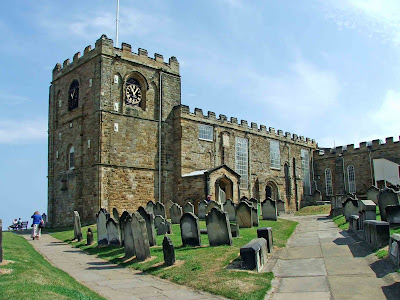 Above. A view of the church from the top of the 199 steps.

Above. A view of the church looking South. 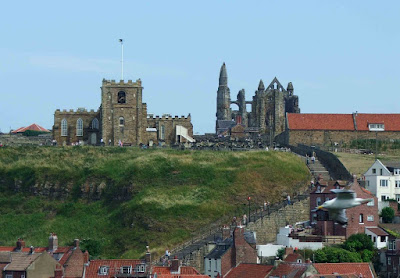 Above. A view of the church from the top of Khyber Pass, looking East. 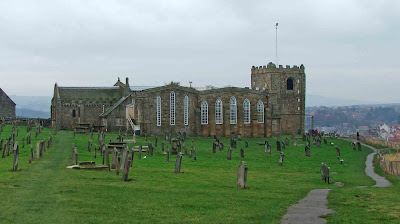 Above. Another view of the church looking South. 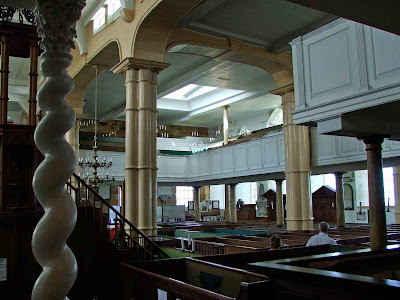 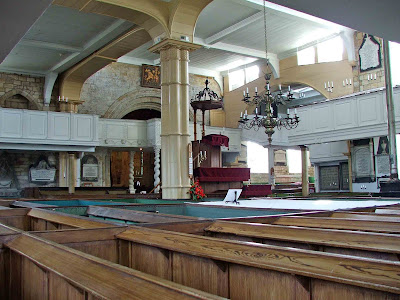 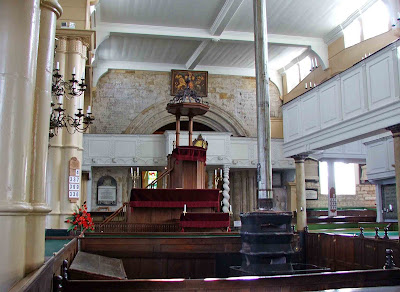 Posted by The Cumbrian Castle listing. at 21:58 No comments: