Caution...the well is situated in the garden of a private house so shouldn't be viewed from the owner's land. It can be seen from the public footpath, albeit with a slightly blocked view.

The well can be found to the West of Kirkland, on a street called Anchorite Fields. Originally this area of Kendal was open fields....indeed a map of Kendal dated about 1868, shows the Anchorite Well and Anchorite House standing alone in fields, with the nearest house some 500 yards or more away to the North East. These days though, the house and the well are surrounded on all sides by houses and streets.

The well can still be seen today, and the stream that it feeds has been incorporated into nearby gardens as it runs North...as shown below. This stream is called Cop Beck, and eventually ends up in the River Kent to the North East. 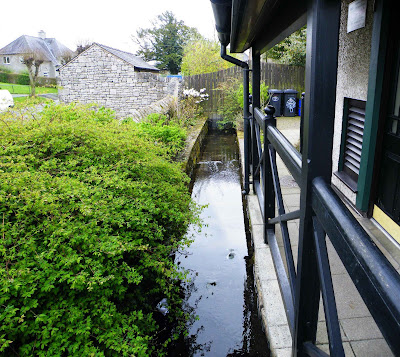 The well itself now consists of a rectangular enclosure with a limestone wall built around it. The water is now only a few inches deep, but would most likely have been much deeper at some point. John Speed's map of 1611 shows the well, marked as the Ankeriche, right on the Southern outskirts of town, and incorporated into a walled garden or orchard. Local legend has it that the house was built next to the well in 1176, although this date is thought to be much too early....the well is not mentioned in Kendal's written records until around 1430. This first mention of the Anchorite house and\or well is as follows:

"4 December. Commission to the Prior of Cartmel to confine Alice Skawseby in a certain house built for anchorites near the church of Kirkeby in Kendall." Whether this was a punishment or a request from Alice Skawseby, I don't know. 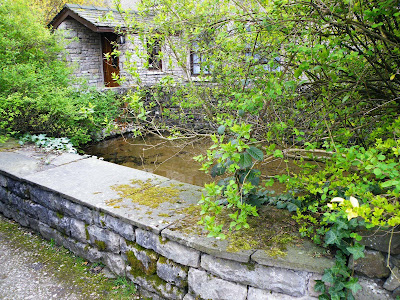 The house that once stood at the side of the well has long since been demolished, and replaced with its modern counter part. Luckily though the well has survived thanks to the intervention of the Kendal Civic Society who funded its rescue and renovation.
As more information becomes available about this intriguing site, I'll post it here.
Posted by The Cumbrian Castle listing. at 20:16

My grandmother Beatrice Bland and her family lived at Anchorite House late 1800s into 1900s I have a watercolor(1925) from back across the fields with castle ruins in distance. I have seen the current building etc in 1990s.

The well was a lot deeper in the 05's maybe about 6 feet deep, It is a spring you could see it bubbling though a White sandy bottom, I am not sure about the waters curing leprosy or anything else but I sprained my ankle & I sat on the little bridge that crossed the run off to the River Kent for about 15 minutes it was very cold & it did the trick I lived about 100 yards away on Anchorite Fields & no bother walking home, but just maybe us who lived on Anchorite Fields were Blessed by living there Who knows.