St John's can be found just off the A6, about three miles North of Kendal. The church sits high up above the main road to Shap, and can be seen for miles around. The church we see today was built between 1869 and 1871 to designs by Joseph Bintley, a Westmorland architect who was responsible for a number of buildings in the area. 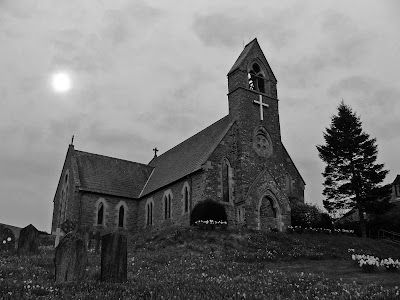 Above. View of the church from the churchyard to the West.
It is thought that there has been a church on or near this site for many centuries, with some records mentioning a small chapel here in the mid to late 1600's. The antiquarian the Rev Thomas Machell mentions a ruined chapel in his report on the area in 1692 when he also reported on the state of nearby Skelsmergh Hall and its tower. 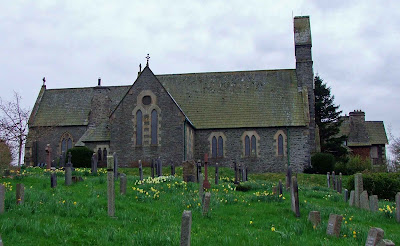 Above. View of the church from the North.
From the early 17th century the ruined chapel had not been suitable for locals to worship in due its poor state of repair. Most had to travel the three or four miles to Kendal to worship at the Parish church of Holy Trinity. A local group, the Skelsmergh Chapelry Committee was set up in 1870, to promote the building of a church for this outlaying collection of hamlets and farms, and to raise the money required to build their church. A small patch of land was bequeathed to their cause by Mr W F Harrison of Martropps, Near Weybridge, Surrey. 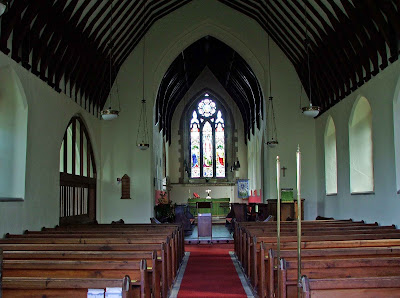 Above. A view of the chance from the nave.
The foundation stone was laid by The Venerable J Cooper on the 5th of May, 1870 only a few months after the committee had set out its plans. The church was complete by 1870, and finally consecrated on the 2nd of November by the Bishop of Carlisle. With the consecration of the church, the new chapelry of Skelsmergh, Scalthwaiterigg and Patton was created, with an estimated congregation of around two hundred worshipers. 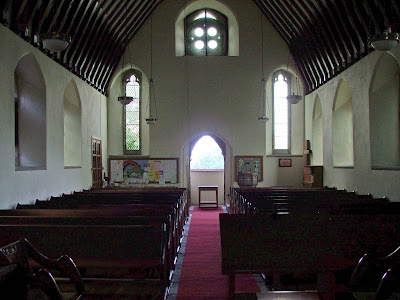 Above. A view to the West end of the church.
At around the same time, Joseph Bintley was asked to provide plans for a new vicarage. The land was bequeathed by Mr T. Rogers of Greenside near Milnthorpe. The vicarage was completed by the end of October 1876. 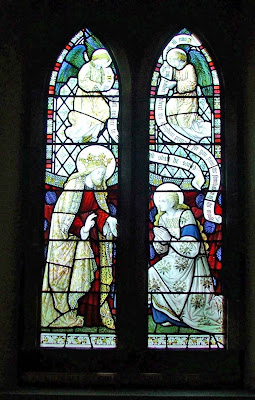 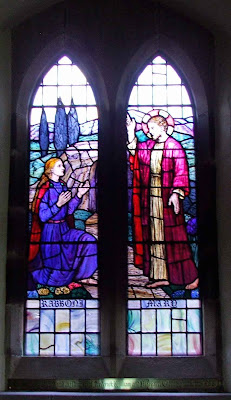 The church has undergone a number of improvements over the years. In 1884 the Committee met again to discuss and plan improvements set forward by the Vicar of Kendal, Rev. R. J. Pearce. A small organ chamber was built on the South side of the church, in order to house an organ built by T. Wilkinson & Sons of Kendal, who's works were situated next to Fry-Days on New Road. 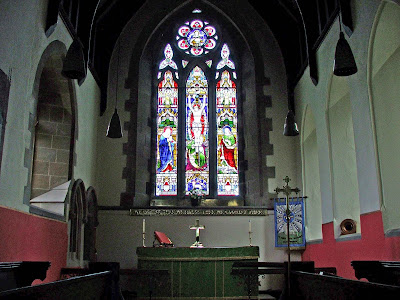 Above. The East window in the chancel, by Heaton, Butler and Payne.
The huge three light window, shown above, was also inserted into the East end of the church at this time (1884) It was presented to the parish by Septimus Norton of Thornleigh, who resided at nearby Skelsmergh Hall, and was a memorial to members of the Thornleigh family.

In 1899 another window was installed, this time in the North wall, as a memorial to John and Frances Morton of Skelsmergh Hall. A war memorial was erected in 1919 and additions were made to it after the end of the Second World War. The church yard was extended in 1950, so as well as the original churchyard on the hill side, there also one over the road to the rear of the church. In 1955, the doorway in the West end of the nave was bricked up, and a new porch was erected in the South Western wall. A window was set in the wall where the door had been. There is a small amount of parking near the church, and as far as I'm aware, the building is left open for inspection.
Check this link for an 1870 ground plan of the church.

The official web site St John's.
Posted by The Cumbrian Castle listing. at 16:12