All Saints can be found on North Street on the West banks of the River Ouse, between the Low Ousegate Bridge and Lendal Bridge. It's fairly well hidden to be honest, and I only stumbled on it by accident as I was making my way around the walls. The first part of the building seen from the road is the three aisled chancel, shrouded in trees and boasting three magnificent three light windows. The tower with its spire is the next part of the building to be seen, rising above the nearby houses. At the West end of the church, standing in a small fenced area, a medieval cross head mounted on a more modern shaft can be seen. 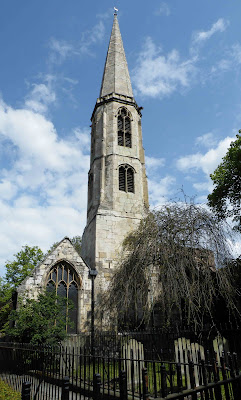 Above. A view of the West tower.
Apparently records indicate that there was a rectory on or near this site in 1089, and it's therefore likely that there was an accompanying church here well before the Norman conquest of 1066. Nothing seems to remain of this earlier church, and much of what we see today dates from the 13th and 14th centuries. The church seems to have been expanded and rebuilt as the population it served increased through the years. The chancel was built expanded and rebuild in the 13th century and another aisle was added. The East end of the church was also rebuilt in the early 14th century and the tower with its spire was added....and it is this period of building that gives us the church we see today. 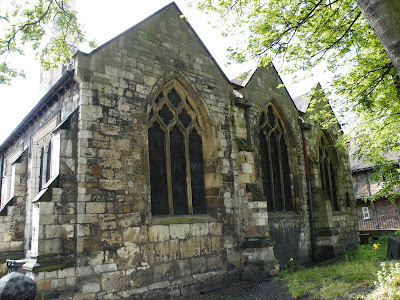 Above. A view of the 14th century East chancel.
The tower with its 120 foot spire were being built by 1394, and the church was a whole was probably all but finished by around 1410, although the new roof was still unfinished by around 1440, and would not be completed until the late 1470's. 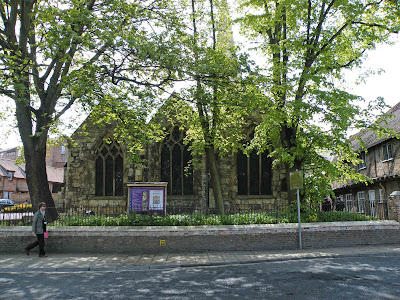 Above. A view of the chancel from across North Street.
According to the church website, the church had at least four and maybe five altars....dedicated to the Virgin Mary, St Nicholas, St Katherine, St Thomas the Martyr and St James the Great. It was certainly an important centre of Catholic worship. The church also at this time, contained around eight chantries, where prayers were said for those who had contributed money, materials and time to the upkeep and running of the church. However, as a result of the Reformation, the altars and chantries, and all the elaborate plate and vestments that went with them, were removed, destroyed, sold off or just stolen. The altar in the chancel became the sole center of worship in line with the new laws that governed how people worshipped. All Saints contains a fantastic array of medieval stained glass. Check their website for some excellent photos of many of the windows. Unfortunately time did not allow for detailed visits of these churches, so I'll have to rely on their excellent website. 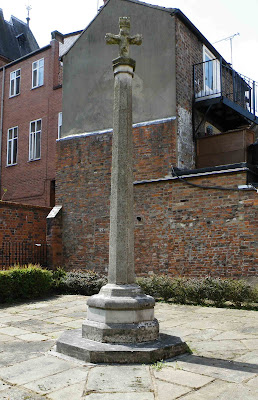 Above. The cross that stands outside the West end of the church.
The shaft and base are undoubtedly modern, whilst the cross head most likely dates from the 15th century. The head of this cross was obviously very highly decorated, but has either suffered due to weather erosion or has been defaced.
Check out All Saints' brilliant web site. There are some excellent photos of the interior of the church here.
It's also worth checking out the Images of England entry for All Saints.
Posted by The Cumbrian Castle listing. at 17:57