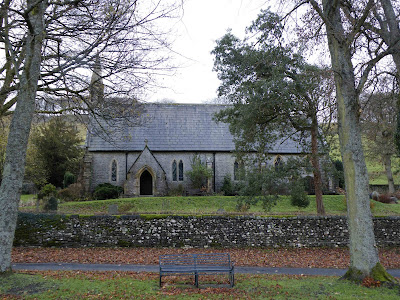 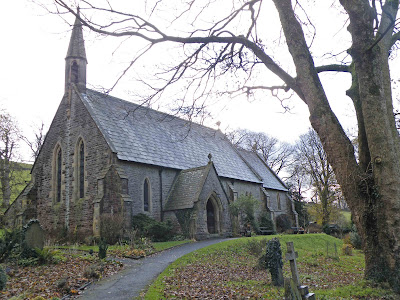 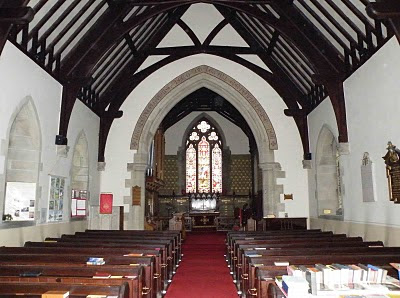 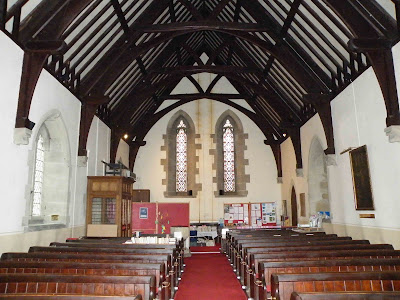 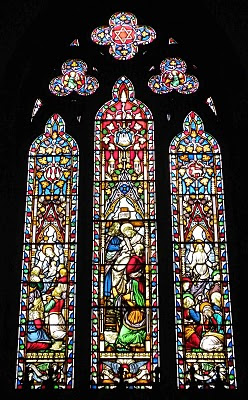 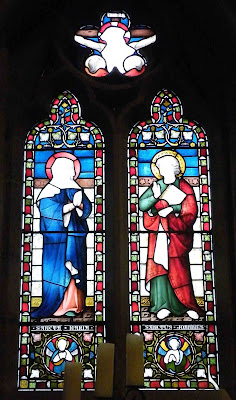 Above. Window depicting Saint Mary (left pane) and her son, St John (right pane)
This window can be found on the South side of the sanctuary, and shows St John and his mother, St Mary. The small cinquefoil above the window originally showed Jesus on the cross, but has been damaged and is now virtually blank. The window is attributed to Lavers, Barrat and Westlake of London, and was probably made in 1869. There is a plaque on the ledge beneath the window, with the inscription "To the glory of god and in memory of Mary Elizabeth Christie who died in faith May 14 1868 aged 37 years".

Above. Window showing an angel appearing at Jesus' tomb.
This single light window can be found at the North side of the sanctuary, and shows an angel appearing at the tomb of Jesus, telling his followers "He is not here. He has risen." There is a small plaque on the ledge beneath the window, which reads, in Latin "In memoriam Maria Burrows, Stackhouse, obit 4 Sept 1872 aetat 26".

Above. Window showing Jesus healing the daughter of Jairus.
This beautifully coloured window can be found on the South side of the sanctuary, and shows Jesus healing the daughter of Jairus. The text at the bottom of the window reads "The maid is not dead but sleepeth". The window probably dates from sometime after 1869, as it is dedicated as follows "To the glory of god and in memory of Mary Elizabeth Christie, who died in faith July 16 1869 aged 16 years." 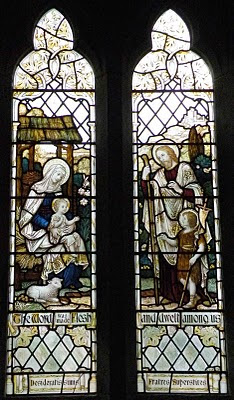 Above. Window dedicated to the Robinson family of Skipton.
This two light window can be found in the South wall of the nave. It was created in memory of the Robinson family from Skipton, and was made by Powell of London. The dedication reads "The word was made flesh and dwelt among us." There are three plaques on the wall below the window. The left most plaque reads "Mary Kathleen Phillimore only daughter of George Robinson of Overdale, Skipton-in-Craven, and wife of Commander VEP Phillimore DSO RN. Born 3 Nov 1875, Died 23 March 1909."
The middle plaque reads "To the glory of god and in loving memory of Mary Kathleen Phillimore and Francis Betram Robinson this window is dedicated by their surviving brothers."
The right hand plaque reads " Francis Betram Robinson Third son of George Robinson of Overdale Skipton-in-Craven. Born 13 March 1890. Died at the harbour works at Para, Brazil 28 September 1910."

Above. Window showing Jesus appearing to Mary Magdalene.
This single light window can be found in the North wall, and shows Jesus appearing to Mary Magdalene after his resurrection. It was made by Powell of London in 1914, and bears the following inscription "To the glory of god and in memory of Travers McIntire, vicar of this parish from 1864 to 1879, died 5th September 1912. Also of his wife, Sarah Anne died 24th June 1913."
Link to the Langcliffe village website.
Posted by The Cumbrian Castle listing. at 10:25