There has most likely been a church here since around AD635, when St Aiden is said to have built a wooden church just beyond the castle's walls. St Aiden of Lindesfarne was an Irish monk who is widely credited with restoring Christianity to Northumbria. He was the first Bishop of Lindesfarne after founding a cathedral there, and travelled extensively across England preaching the gospel amongst the Saxon nobility and the working classes. The period in which St Aiden brought Christianity back to the fore, saw Anglo Saxon pagan beliefs battling for superiority across the country. With the patronage of King Oswald of Northumbria, St Aiden was able to build churches and leave behind a Christian legacy that fulfilled the church's desire to re-establish itself across the North of England, eventually usurping the pagan beliefs that were taking root amongst the towns and villages of the day. 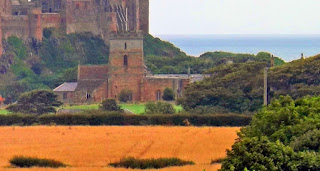 Above. A view of the church from the West, with the castle in the background.


Bede tells us that St Aiden died here at Bamburgh in AD652, and a beam inside the present day church traditionally is said to be where he was laid when he had died. The building we see today, dates from the late 1100s, with a smattering of pre-1066 stone work in evidence throughout. The Chancel is said to be the second longest in England, and was added in 1230, no doubt to add grandeur to an already important church.


The best views of the church are to be had from the B1342 travelling West out of Bamburgh. The castle and church look magnificent against the backdrop of the North Sea.
Posted by The Cumbrian Castle listing. at 05:01