The small village of Whittington can be found about 2 miles South of Kirkby Lonsdale on the B6254. The church can be found on the road that leads out of the village, West towards Burton in Kendal. There is parking at the side of the road, and the church can be seen immediately to your left, high up on the brow of a steep hill. This hill is in fact the remains of a Norman motte and bailey castle....with some historical records claiming that it could predate the Norman invasion, and could have been a Saxon moote, a meeting place, later adopted and adapted by the Norman invaders.

Overwhelmingly though, the mound appears to be the remains of the Norman castle here, and in all likely-hood, the church is built over the bailey of the castle. The photo above, is taken from the fields below the church and the motte, looking North. The ditches and banks, marking the defensive boundaries of the motte have disappeared, but most likely followed the course of the wall at the top of the field (shown above)

The photo above, is taken from the bottom of the motte, looking East towards the church tower. The motte looks more pronounced from this angle. 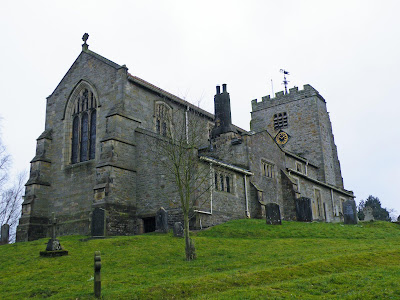 The oldest part of the church is the tower, thought to have been built in the late 15th or early 16th century, although records state that there was a church on this site possibly from as early as the 12th century. The tower stands to a height of 50 feet, and contains a niche with a statue of the Good Shepherd. The tower contains a pele of 6 bells. They date as follows: The treble from 1739. The second from 1754. The third, fourth and fifth from 1875. The tenor is an 1875 recasting of a bell from 1673. 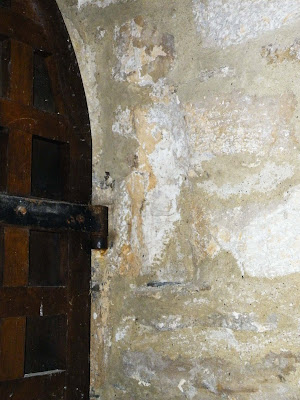 The photo above, shows (not too clearly on this photo) the indentation of a swinging draw bar. This is a gradual cut in the stone face of the jam of the door, and would probably have been used to secure the church from the inside. Instead of the door being secured by a sliding draw bar, as at Kirkby Lonsdale and Melling, this would have swung from above, and rested on the shallow sill of the cut in the stone work. 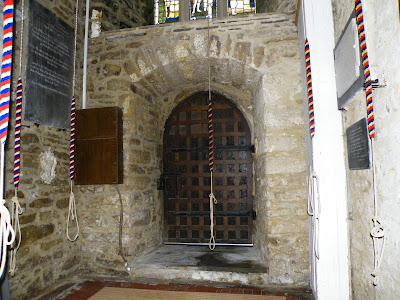 The photo above, shows the tower door with the bell ropes hanging down in front of it. The door almost has the look of an iron and wood yett. The thickness of the tower walls can clearly be seen here. 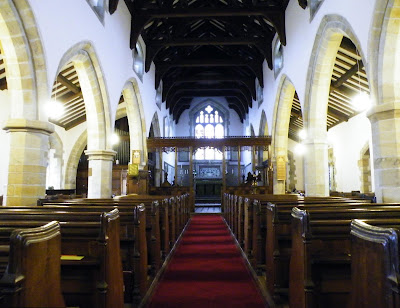 A view looking East towards the chancel and the altar, and the stained glass window inserted during the 1875 restoration of the church by Colonel D.C. Greene. During this restoration, the church was almost completely rebuilt. 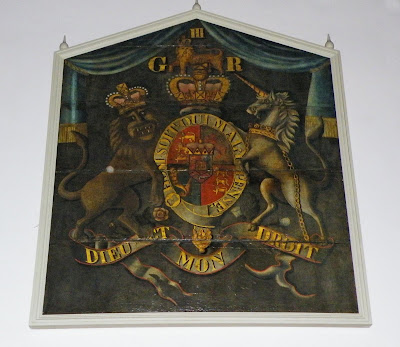 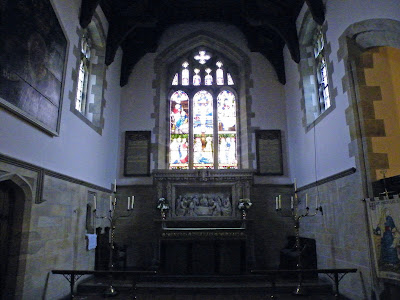 View of the altar in the Chancel, including the window of 1875. 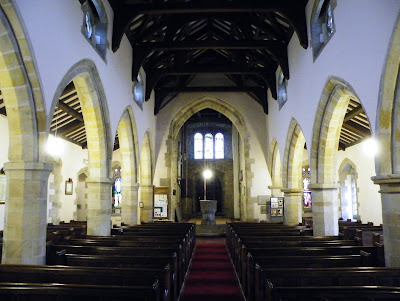 A view back towards the tower, with the Victorian font just visible. 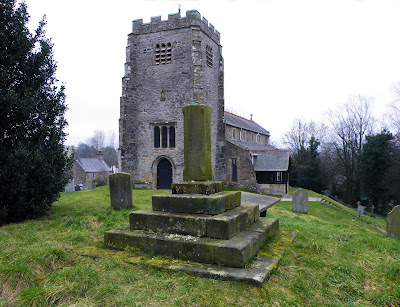 The sundial that stands on the summit of the motte, is probably mounted in the stepped base of a cross base.
Posted by The Cumbrian Castle listing. at 19:22

Again an interesting read/view - along of course with your castle blog. They've prompted me to undertake a few trips of late - and even begin my own blog recording places visited.

Keep up the good work