The strange remains of St John the Baptist can be found sandwiched between the Roman Amphitheatre (to the North West) and the River Dee (to the South) in the city of Chester. At first glance, the church appears to be a Victorian building.....red sandstone and fairly unobtrusive. On closer inspection however, the full visual clout of this fantastic church becomes evident. It would appear that the Victorian church is sandwiched between two portions of a much earlier building, in ruins, but still standing to some great height. 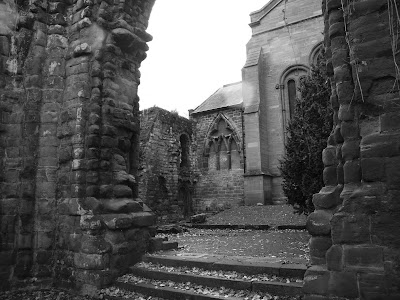 The above photo shows a view of the Victorian church, looking West through the medieval ruins.

The church consists of masonry from an impressive number of building periods....11th, 12th, 13th, 14th, 16th and 19th centuries, with some 20th century additions. The walk around the rear of the church, to the South of the building, offers the best view of the original Norman and medieval portions of the still standing ruins. 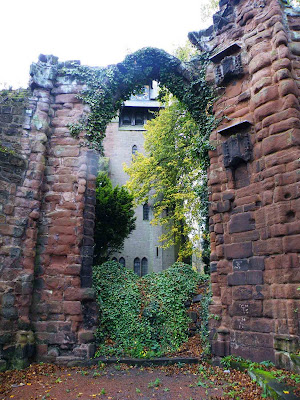 The above photo shows the Victorian church through one of the medieval arches.

It is thought that before 1066 and the Norman invasion of Britain, a Saxon church stood on this site. The Saxon church was founded by King Aetherlred, King of Mercia, sometime in the late 680's. Local legends tell of the King dreaming that he was instructed by God, to erect a place of worship wherever he saw a white hind....and consequently, whilst out hunting, the King saw a white hind on this spot, thus building the church. The church was rebuilt and extended in the early part of the 10th century, by the Earl of Mercia, with a stone structure probably replacing the earlier wooden building. 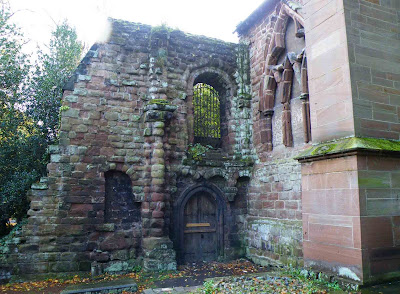 The above photo shows the Victorian church where it joins onto the medieval ruins.

In 1075, Peter de Leia, Bishop of Lichfield, began the building of a cathedral on the site of Aethelred's church. It's somewhat odd that the Bishop chose to place his new cathedral outside the protection of the city walls. The cathedral was laid out with two low towers to the West, a central tower (now long gone) transepts, aisles, a nave and numerous chantry chapels. The Bishop died in 1082 before he could see his great work completed. Building work seems to have ceased, and the cathedral remained unfinished for many years. Peter's successor, Robert de Limesey, was more heavily involved with Coventry's monastery, and only occasionally visited Chester. It appears the work begin again until around 1190.....and it would not be until the latter part of the 13th century, that the cathedral approached a state of completeness. 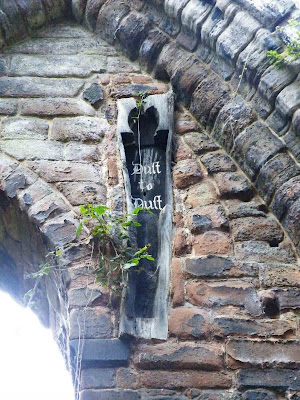 The above photo shows a wooden coffin mounted in a niche. Whether this is original or not, I'm not sure. I think the text reads "Dust to Dust"!
In the mid 1300's, the building was in a poor state of repairs, being described as "comely and sumptuous fabric constructed of stone and wood of great breadth and length, but the same being ancient and decayed, repair was necessary or it would fall into irrevocable ruin" (thanks to www.chesterwalls.info) It probably came as no surprise when the nearby abbey of St Werburgh took over as Chester's cathedral. 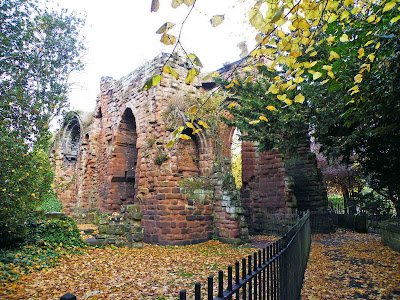 The above photo shows a view of the ruins looking West towards the park.

St John's seems to have suffered a number of disastrous collapses: The huge central tower, of which no remains survive, fell down in 1468 and 1572, followed by the collapse of the Western tower in 1574. When the Western tower collapsed, it also took four bays of the Norman nave. The West tower was rebuilt in the 16th century, but once again fell down on Good Friday 1881, completely demolishing the porch. 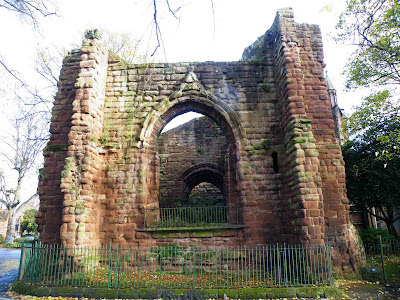 The above photo shows the lower portion of the Western tower. The window probably dates from the 14th century. The tower is joined to the Victorian church by medieval walls, badly weather worn and eroded.
The tower, shown above, was used as a cannon battery during the siege of Chester by Parliamentarian forces. Its position outside the City walls, gave the besiegers direct line of sight upon both Thimbleby's Tower and the two gates here....Newgate and the Wolf gate. The tower was lucky to survive the period leading up to the attack, as the commander of the defending Royalist army had ordered many buildings outside of the city walls to be demolished thereby denying the attackers any cover....this order included the Western tower of St Johns. As it turned out, luckily for us, hardly any building in this area was demolished under these instructions. 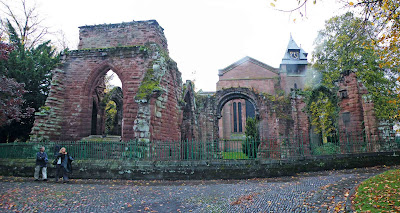 The above photo shows a view of the East end of the church. The Victorian building can be seen above and through the arches of the ruins.
The church was occupied by the Parliamentarian forces for a period of around five months, during which time it was transformed into a virtual fortress. It must have been a difficult place to be, laying less than two hundred yards from the city walls. It was reported that, when the townsfolk were allowed back into their church, it was in a poor state of repair, with all its furniture and memorials demolished, defaced or removed. The tower eventually collapsed in 1881. 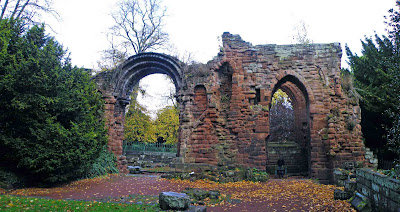 The above photo shows a view inside the Eastern end of the church, looking towards the park.

The church is considered to be one of Europe's finest surviving examples of Norman architecture, and its Grade I listing reflects this. Unfortunately it was locked in preparation for a service when I visited, so a return visit is required.

The above photo shows the rear of the Victorian portion of the church. The medieval tower lays to the left of the photo, hidden behind the trees.
Now reduced to the roll of a parish church, St John's is a fine example of Norman, Gothic and Gothic Revival architecture. R.C. Hussey and John Douglas were responsible for the fine building sandwiched between the sandstone ruins of the once important cathedral, and their work has survived very well. Check out the Diocese of Chester website for further information www.parishofchester.com
Posted by The Cumbrian Castle listing. at 15:16