Gothic corbels in Holy Trinity
Kendal
Cumbria
The nave of Holy Trinity in Kendal is a really decorative part of the church. Not only are there sixteen clerestory windows dedicated to all manner of Kendal's famous and rich, but the rich dark wooden ceiling contrasts starkly with the white-washed walls and pale stone columns. Looking high into the ceiling space, you can make out the gothic corbels that are used to hold the struts from the vaguely King Post roof. Each corbel is mounted between a clerestory window, and best of all...is different from its neighbour. No two of these nineteen corbels are the same. I've attempted to identify the figure that each represents, and if possible, to explain what they mean...but this will be an ongoing project as I'm certainly no expert!! 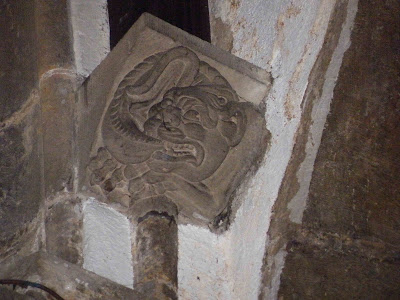 Above. Possibly a stylised lion or other big cat, eating its tail. Similar to one of the gargoyles on the exterior of the church.
Lions were traditionally symbols of Jesus, and were thought to be able to hide their trail from hunters by using their tails. Lions also represent the resurrection of Jesus. 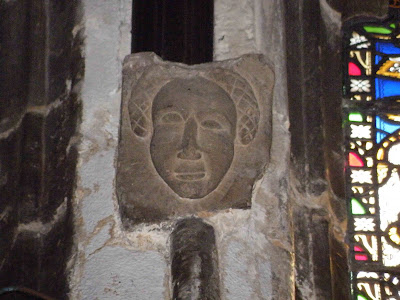 Above. Possibly a depiction of a medieval woman. Her hair is either braided against her scalp, or she is wearing a headpiece. 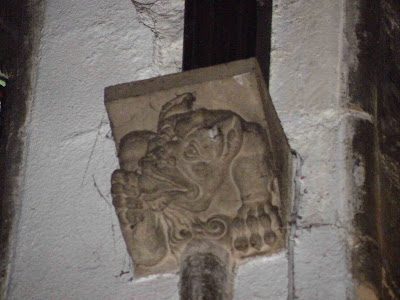 Above. Another (possibly) stylised cat eating its tail. 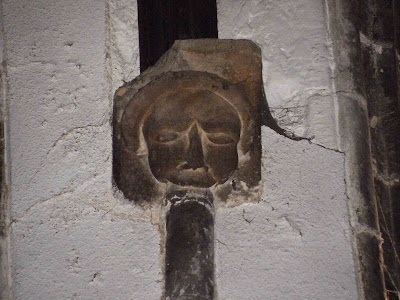 Above. The upper two thirds of a human face, minus the jaw. I can't tell if this is how it's meant to be, or if the corbel has been damaged. 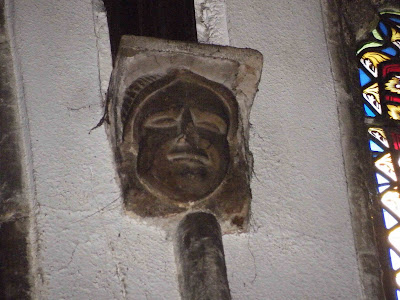 Above. A simple human face. 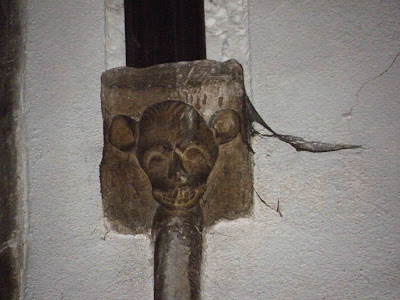 Above. This certainly looks to me like a monkey's face. 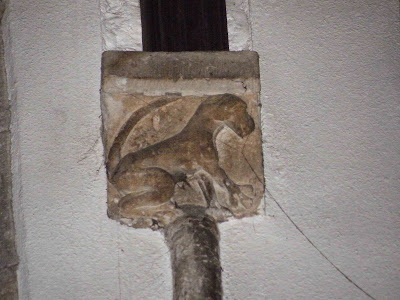 Above. A simple dog, holding its tail above its back.
Dogs were traditionally thought to be able to heal their wounds by licking them, so people used to leave a dog next to an injured or sick person, in the hope that their wounds would be healed. On a more spiritual level, dogs healing wounds were symbolic of people confessing their sins. 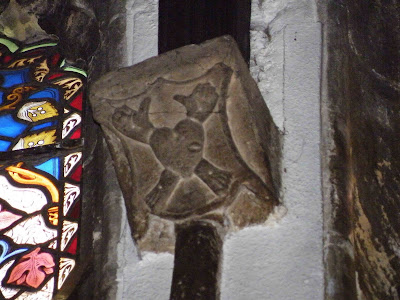 Above. This appears to show a heart, with two hands above it and two feet below it. It looks to me almost like a Roman Catholic symbol.
Hands traditionally represent healing, blessing praise or servitude, depending on their position and attitude. I guess this corbel, with its hands coming from the heart, could mean praise to god coming from the heart of the congregation gathered below. I'm not sure how the feet would have come into this though....remember, I did say I was no expert!! 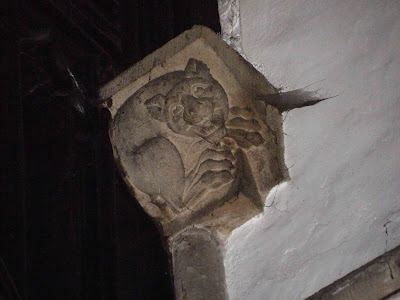 Above. Yet another stylised lion or other big cat. 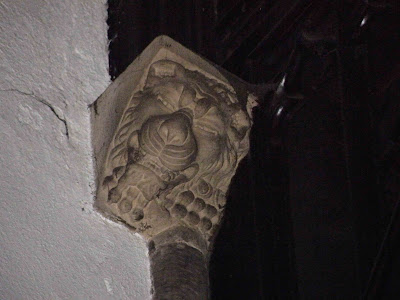 Above. Another lion, this time resting its head on one of its paws.
Lions were thought to sleep with their eyes open, constantly watching, and therefore represented god keeping perpetual watch over his flock. 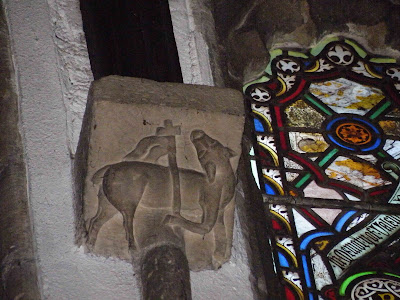 Above. This appears to show a sheep\lamb overlaid with a cross...possibly representing Jesus as the Lamb of God.
A lamb standing with a banner, as demonstrated here, represents Agnus Dei (Lamb of God) and represents the risen Christ, triumphant over death. 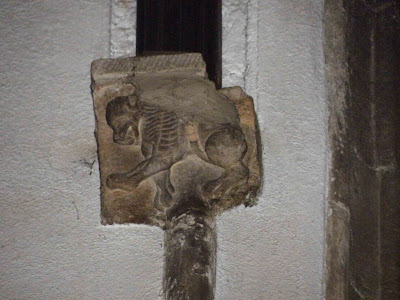 Above. Possibly another stylised lion. This corbel has been damaged in the past....I wonder if this beast had wings, which would have made it a Gryphon?
If this was indeed a winged gryphon, it would have represented many things to religious people. Gryphons were traditionally monogamous creatures, mating for life and never seeking another mate should their partner die. From this, the church used them as a symbol of their views of marriage. Gryphons, being a combination of a flying and walking beast, were also seen to represent Jesus, who the church obviously believed to be both of man and god. As Gryphons were a mixture of eagles, the kings of the air, and lions, the kings of the animals, they were also considered to be a representation of god. 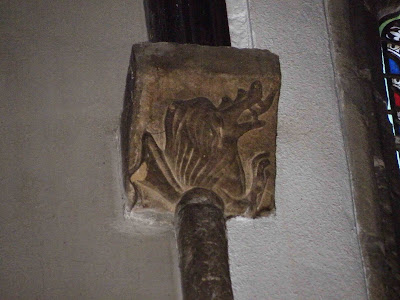 Above. This corbel appears to show a dragon, looking away and to the right...its huge teeth can be seen.
Alternatively, this could be a basilisk....a medieval representation of Satan and embodiment of sin. 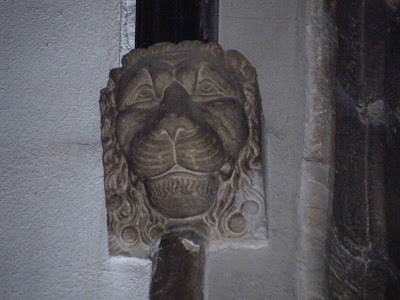 Above. There's no doubt that this is a lion. 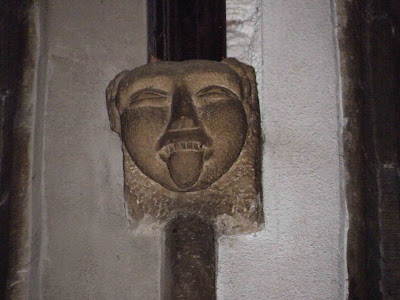 Above. A rather portly human face, sticking its tongue out at those looking up at him! 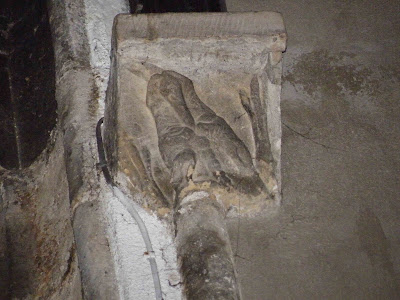 Above. I would say this is one of the older corbels. The stone matches the oldest of the columns here in the nave. This looks to be a serpent\dragon's head, looking sky-ward. I think you can just make out its tongue. Possibly representing the devil\Satan mocking heaven\god.
Alternatively, this corbel could be an antelope of some type (albeit with a single horn). If you flip the image 180 degrees, you can see that what appears to be a bony spine running down the centre of the beast's head, could in fact be a twisted horn, much like an antelope's. The beast also has a single leg represented in the carving...ending in a three toed hoof.
More often than not, serpents or dragons are seen to be beneath the feet of either St George or St Michael, and are usually shown looking up at their slayer. The serpent or dragon here is certainly looking up as if it's not in its correct position. 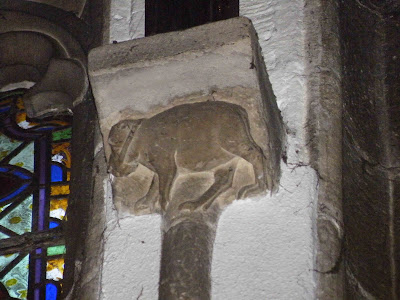 Above. This looks to be a very rotund dog with a muzzle or even a halter? 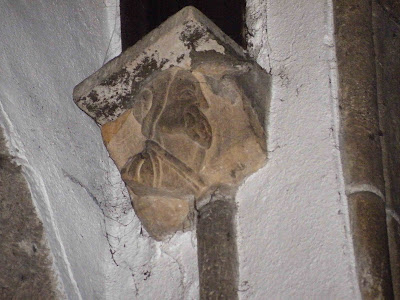 Above. A human face with a full beard.
I'll keep investigating the symbology behind these fantastic carved corbels, so keep checking back for more information.
Posted by The Cumbrian Castle listing. at 18:24

Love the pics. The heart with the hands and feet is the Five Wounds of Christ - a Catholic symbol, popular in late middle ages. It repesents the nails in his hands and feet and the spear with which his side was pierced and thus his sacrificial love.