St Andrews in Penrith contains and displays an eclectic collection of memorials, historical artefacts and of course stained glass. 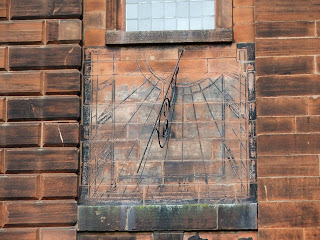 Above. The sundial above the main door into church through the tower.


During the 1722 rebuild and refurbishment of the church, it was decided that the Chancel should be decorated with murals. A local artist by the name of Reed (no first name known) was employed to decorate either side of the altar. To the right of the altar Reed painted a life-size image of St Andrew carrying his saltire cross. To the left of the altar Reed painted a scene representing Jesus performing a miracle in front of an audience of worshippers. In the space between the tip of the arch and church roof, Reed painted a small choir of angels. Over the years, the inclement Cumbrian weather managed to penetrate the church walls, eventually obliterating Reed's work until it was almost gone. Unfortunately for us, there seems to be pictorial record of his work. 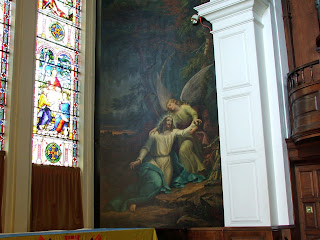 Above. Part of Jacob Thompson's mural - "The agony in the Garden of Gethsemane"


When the church was again refurbished, this time in 1845, the church council decided that Reed's badly damaged murals should be replaced with fresh paintings. Another local artist, Jacob Thompson, was commissioned to create these works of art. It is thought that the painting took around six months, and Jacob received payment of 100 guineas for what is widely regarded as the pinnacle of his artistic career. The painting shown above, depicts "The agony in the Garden of Gethsemane" where Jesus prayed after the Last Supper. 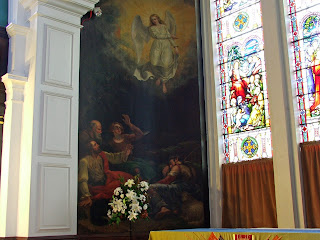 Above. Part of Jacob Thompson's mural - The angel telling the shepherds about the birth of Christ


The left hand painting shows an angel telling the shepherds about the birth of Chris. Jacob painted real life people that he knew from Penrith into his paintings. In this particular scene, he painted Robert Bailey as the shepherd with the red shawl. Bailey was an official in the House of Commons in London. Michael Mounsey of Town Head was painted as the bald shepherd on the left at the back of the group. The boy with his arm raised towards the angel, was actually a young woman, who posed for Jacob. The man sleeping on the right side of the scene, was reputedly a traveller whom Jacob persuaded to sit for him whilst he painted him into his mural. The landscape in which the scene is set, was reputedly based on Pooley Bridge with Ullswater in the background. 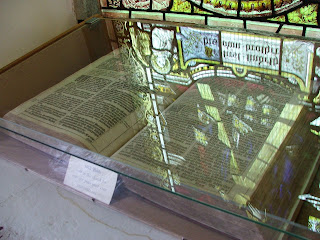 
St Andrew's 1613 bible was used for all its services right up until 1722. It was restored in 1984, and now resides within the safety of a glass case. 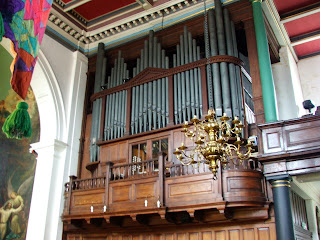 The T.H. Harrison organ replaced an earlier organ that was purchased for the church in 1799. The new organ was introduced to the church in 1870. A vestry was built beneath it and required the removal of two stone pillars. These were moved to the West door. In 1888, the organ was rebuilt by Wilkinsons of Kendal at a cost of around £400. After the rebuild by Wilkinsons, the organ was said to be 'one of the finest church organs in the North of England'. Up until 1900, the organ was powered by a hand pump. Wilkinsons a hydraulic engine in 1899, costing £95. In 1920, the organ was converted to an electric organ, costing £913.  1971 saw yet another rebuild of the organ, this time by Jardines of Manchester. 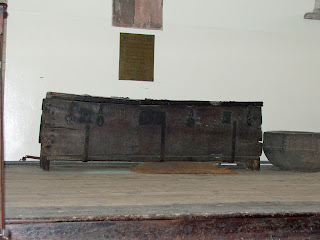 Above. The old Parish chest.


The old Parish chest, shown above, can be found at the top of the stairs from the tower. Like most chests of this kind, important Parish, church and perhaps legal documentation would have been kept safe here, behind four locks. 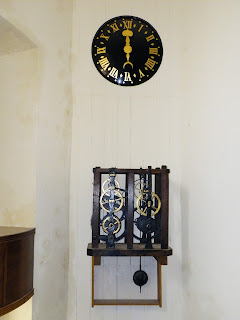 Above. The Cheesbrough Clock.

The Cheesbrough clock was installed in the church tower during the 1722 rebuild, replacing an earlier clock that is thought to have dated from sometime around 1655. It was built by Aaron Cheesbrough, and bears the date 1712. Cheesbrough learnt his trade in London under William Clement, creating this beautiful clock for the church at a cost of £16. 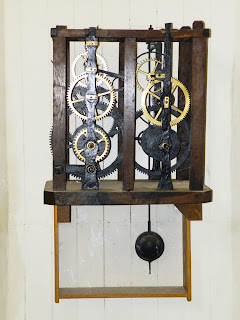 Above. The Cheesbrough Clock and it's working.


Up until a few years ago, the clock lay in pieces. It was only relatively recently that it was restored to working order and placed back in the tower. 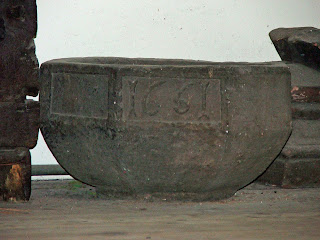 The 1661 font was originally found in a garden in Benson's Row. When I visited in 2007, it lay on the floor at the top of the stairs from the tower, dirty and otherwise forgotten. 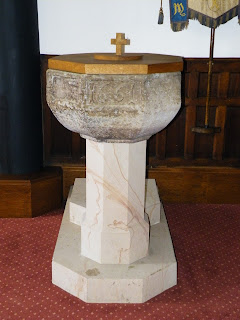 
When I visited the church again in 2012, the 1661 font had been cleaned and mounted on a stone pedestal and was once again being used as a font. It was most likely removed from use during the 1772 rebuild. 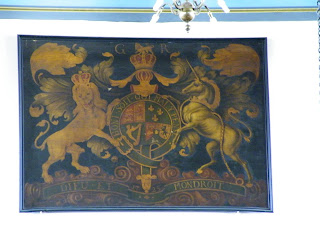 Above. The Royal Coats of Arms. 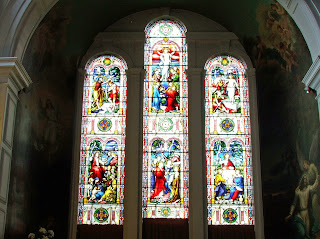 Above. The East\Chancel window, surrounded by the Jacob Thompson murals.


The Chancel\East window was created in 1870, and is dedicated to the memory of Lieutenant Colonel Anthony Harrison, and was paid for by a mixture of public subscription and his two sisters. The window was produced by Hardman and Powell of Birmingham, who are famous for creating windows for the Houses of Parliament in London. 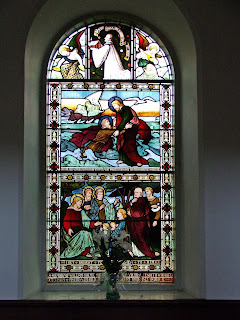 Above. The Christ Church window in the South wall of the Nave.


The Christ Church window dates from around 1868, and is dedicated to the memory of the Rev. William Holme Milner. The Rev. Milner was an instrumental in obtaining funding for the building of nearby Christ Church. Indeed, the figure at the very top of the window, dressed in white vestments, is the Rev. Milner with a model of Christ Church in his hands. 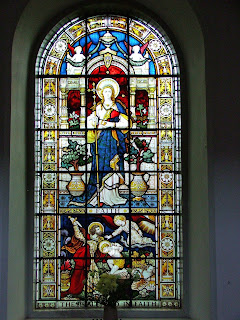 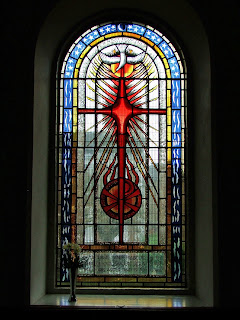 Above. Possibly a relatively modern window. 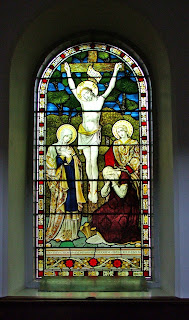 Above. Window depicting the crucifiction. 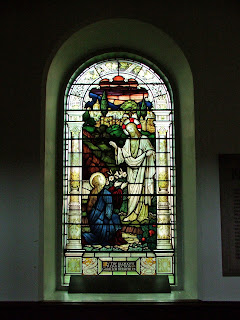 Above. Window depicting Jesus after the crucifiction.


The window shown above, shows Jesus after his resurrection. In the background Calgary can be seen with the three crosses, and if you look closely, Jesus bears the marks of his crucifiction on his hands and feet. 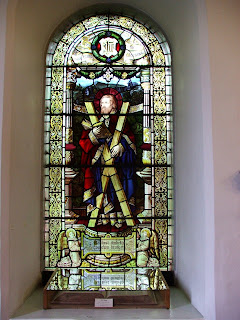 Above. Window depicting St Andrew with his saltire flag in the Lady Chapel.


The window shown above, depicts the patron saint of this church, St Andrew, carrying his traditional saltire cross. This window holds a prominent position in the Lady Chapel\St Mary's Chapel, in the North East corner of the Nave. 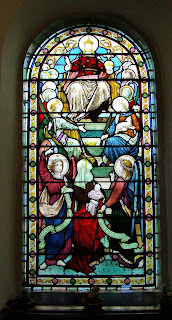 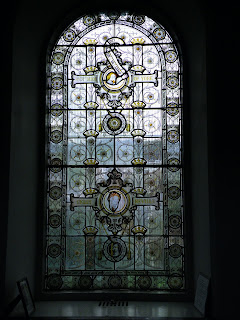 Above. The Neville window in the South wall of the Nave.


The Neville window can be found in the South wall of the Nave. It is made up of a few fragments of a much older window, thought likely to have come from the original church here. The fragments were incorporated into a new window in the 19th century. The few pieces that remain survived a fire of that occurred during the 17th century. 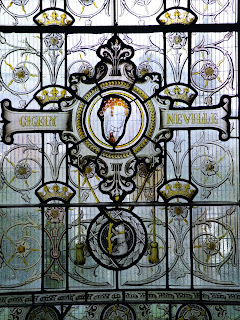 Above. Detail of the Neville window depicting Cicely Neville, Duchess of York.


The window shown above, depicts Cicely Neville, the wife of Richard, Duke of York....rightful heir to the English throne. She was the daughter, sister, aunt and mother of four successive Lords of Penrith. Her face shown in the window is one of the remaining parts of the original window. Below Cicely can be seen Richard's personal emblem, the bear and ragged staff. 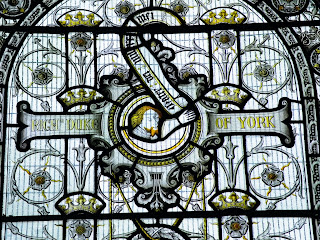 Above. Detail of the Neville window depicting Richard, Duke of York.

The portion of the Neville window shown above, depicts Richard Plantagenet, Duke of York. Richard was the rightful heir to the throne, but was killed at the battle of Wakefield in 1460. Again, the face depicting Richard, is one of the surviving pieces of the original window. 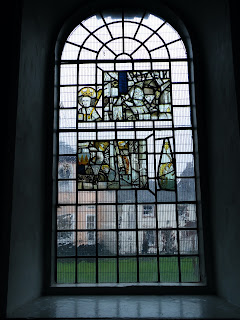 Above. The Richard II window in the North wall of the Nave.


This has to be one of the most fascinating windows I've ever seen. It's clearly a collection of medieval glass that has survived in a fragmented state. Rumour would have us believe that the many pieces may have come from windows originally in Penrith Castle. 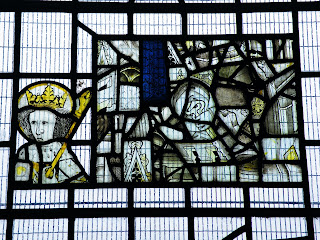 
The most intriguing section of glass is the figure on the far left hand side of the portion of this window shown above. It is thought to depict Richard II. Richard was responsible for gifting the manor of Penrith to the Neville family in 1397. 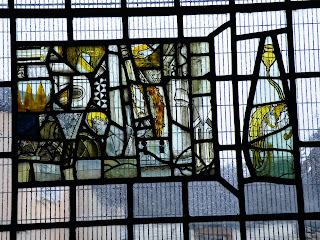 Above. Detail of the Richard II window, showing an angel (far right)


The lower portion of the window is a replica of the original glass. These pieces were largely destroyed or damaged further by vandals some years ago. Of particular note, is the angel at the far right of the window.

Credit: Information from "A History and Guide to St. Andrew's Church, Penrith" by Simon D.I. Flemming (1997)

Posted by The Cumbrian Castle listing. at 23:08