This beautiful church can be found in Lancing in West Sussex (the old Saxon village of North Lancing) The building was listed as Grade I in 1954, and is one of only seven such listed buildings in the whole of the Adur district. Before the 11th century, North Lancing and South Lancing were the two most important manors in the area, Unusually, with such a large agricultural population, no church is recorded for this area. It's thought that a church was finally established on this site sometime around 1120....a date that corresponds with historical analysis of some masonry found in the Chancel. 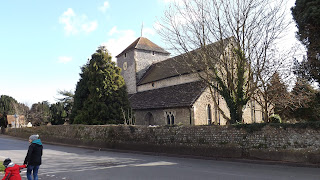 Sometime around 1180, an arched doorway was built, now incorporated into the South porch (shown below) 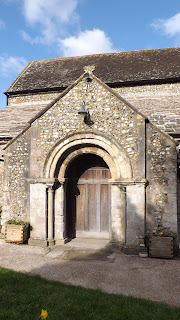 Above. The South porch with its late 12th century arch)

The church underwent a huge rebuild between 1280 and 1300, resulting in the form and shape that we see today. A stair turret was added to the tower in the 15th century (shown on the photo below) By 1621, after the tower had started to collapse, the rest of the building was in serious decay, and by 1662, it was declared unusable. 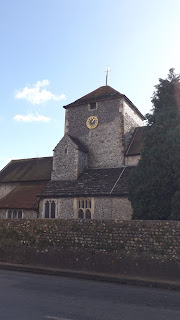 Above. The shortened tower with its distinct Sussex cap (roof)


When the tower started to collapse in 1618, its height was reduced, resulting in the shorter, squat tower seen today. Originally it would have had a parapet at its top, but this was destroyed and after repairs were made, a 'Sussex cap' roof was added.

It wasn't until the late 18th century that any serious effort was undertaken to repair the building and bring it back into use. A vestry was added in 1934. The 19th century restoration was undertaken at the personal expense of the vicar at the time, Thomas Nash.

Unfortunately the church was not open on my visit.

Posted by The Cumbrian Castle listing. at 17:15