The Abbey at Dundrennan lies about 5 miles east of Kirkcudbright, in an area littered with the remains of medieval towers, churches, stone circles and standing stones and ancient forts. The Abbey was reputedly founded by King David I, and built by Cistercian monks from the Yorkshire Abbey of Rievaulx. The building is thought to have been started sometime around 1142, with the site being occupied for the next 400 years or so.

The link with Rievaulx Abbey in Yorkshire is an educated guess, owing much to the fact that written records indicate that the Abbot of Rievaulx visited Dundrennan in 1164. Added to this, the fact that on about two occasions, monks or abbots from Dundrennan moved to Rievaulx to become Abbots there as well.
The Abbey was probably built over a 50 year period, with a tight-knit group of around 13 monks and 10 laymen conducting most of the work. Upon its completion, Dundrennan became the ‘mother’ house for two other Cistercian abbeys in the Galloway area; Glenluce Abbey, founded in 1191 by Roland, Lord of Galloway, and Sweetheart Abbey, founded in 1273 by Lady Devorgilla (in memory of John Balliol, her husband)

As you look at the remains of the Abbey from the car park, what would have been the largest part of the building, the Nave is now nothing more than a large open space with the remains of the walls surviving to around three feet in places. Only one of the Nave support pillars survives above ground, with the others surviving to ground level only. The North and South Transepts still stand to a significant height, although various walls are missing from all portions of this part of the building. The tall wall with the arched doorway would have formed the outer West wall of the Nave, with two small doorways just visible, blocked with masonry. The surviving arched door way would have been the main entrance to the Nave, and survives nearly intact. The walls of the cellars and the outer parlour also survive to make up the rest of the outer perimeter of the site. The monk’s cemetery lies beyond the Nave and can just be seen through the ruins. The Sacristy and the Chapter House still survive to some height, and lay to the right of the photo.
During the 13th century wars between England and Scotland, the Abbey declared its allegiance to the English King Edward I as he invaded Scotland. The declaration seems to have done the Abbey no good however, as it was seriously damaged by marauding English troops in 1299.
The 14th and 16th centuries saw the fortunes of the Abbey rising, as the monks became almost self sufficient in food and fuel, and began to export wool to mainland Europe. 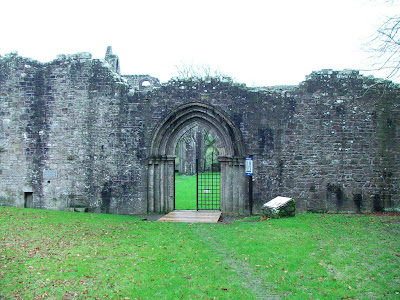 In 1523, the last abbot at Dundrennan was promoted to the Bishop of Ross, and a lay administrator was appointed to take care of the day to day running of the Abbey. When the Reformation began to take hold in 1560, the Abbey did not escape the attentions of Henry VIII’s agents. It was demanded that the Abbey, like so many others throughout the kingdom, be demolished and stripped of its riches. The then current administrator of the Abbey, Edward Maxwell refused to follow these instructions, and somehow managed to persuade Henry’s agents to leave the building standing. So, although monastic life was banned, and indeed ceased, the church was still used as a parish church. This continued right up until the 17th century, by which time the Abbey was in a serious state of disrepair.
An interesting side note in Scottish history…..in 1568, Mary Queen of Scots, after being forced to flee from Langside, spent her last night in Scotland at the Abbey, before making her ill-fated trip to Workington, and thence to her eventual execution in 1587 at Fotheringhay Castle.
In 1621 the demise of the Abbey and its lands was signalled when they were annexed by the crown, and then in the 1650’s the church was no longer in use, with services being conducted at nearby Rerwick.
The Abbey was taken into state care in 1842, with some renovation work being carried out at this time, mainly to consolidate the ruins, but also to prevent the quarrying of stone from the remains. It’s said that many houses in Dundrennan contain stone from the Abbey.
The Abbey is now in the hands of Historic Scotland and the remains can be viewed for a small admittance fee. The car park nearby is free and expressly for the use of visitors.
Posted by The Cumbrian Castle listing. at 19:47