A selection of stained glass windows from Cartmel Priory
This is by no means a complete photographic collection of the stained glass at Cartmel. There are a number of windows that were just too high for my poor camera to take decent photos of....these will have to wait until a future visit. For now though, this is a good representation of what is to be seen here. 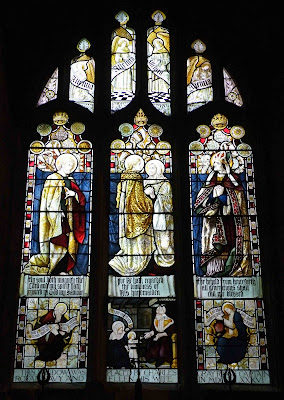 Above. A window given to the church by Charles Gray Rigge, Captian in the Royal Navy, and his wife Ellen.
The four angels right at the top of the window bear scrolls with the word Alleluia on them. The white rose of Lancashire is very much in evidence in this window, due to the fact that Cartmel, and the Cartmel peninsula was originally part of Lancashire before it became part of Cumbria after the County re-organisation of 1974. Captain Grey Rigge was the Lieutenant Commander of the Comet, a tug and sometime ferry, in 1847. This vessel was the first steam ship ordered by the British Admiralty. He was also the Lieutenant Commander of the Trident, a British Admiralty Sloop, in 1846. 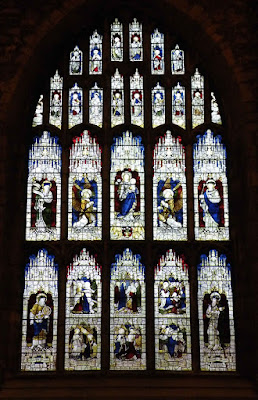 Above. A slightly over-exposed photo showing one of the larger windows.
Unfortunately, as this is slightly over-exposed, it's proved difficult to identify any of the characters in this window. All I can say with any conviction is that the top fourteen windows, excluding the one on the left and the right (which contain angels with scrolls) contain images of saints. A few of them are readily identifiable, for example, the fifth window from the left on the bottom row of saints, is obviously St Andrew with his Saltire cross at his back. On the top row of saints, second from the right, is St Matthew. The others are all either too pale to read, or the text is obscured. If I manage to get a better photo of this window, it will be posted here. The bottom left and bottom right images are of prophets, but I'm unable to read their names. 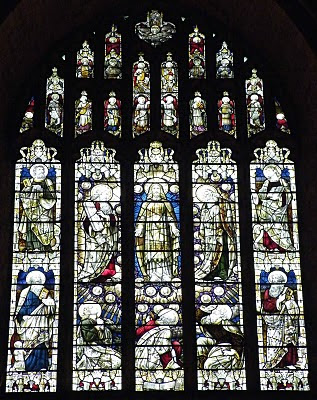 Above. Another of the larger windows.
This window contains fifteen smaller windows at the top, all of which contain images of angels. They are either playing musical instruments or are holding scrolls with the word Alleluia written on them. The five bottom row windows all contain images of characters from the bible. Obviously, the centre window contains an image of Jesus. Immediately to his left is, I think, Moses, judging by the tablets that this character is holding. I'm afraid I'm unable to identify any of the others. 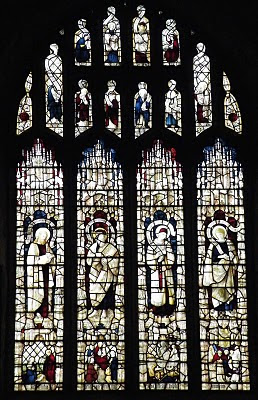 Above. Another of the larger windows.
Much of this window is written in Latin and over exposed so there's not much to say about the glass in this window. 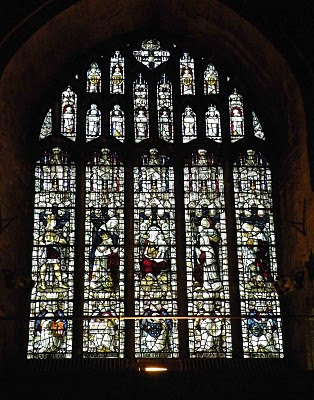 Above. One of the 'busier' windows at Cartmel Priory. 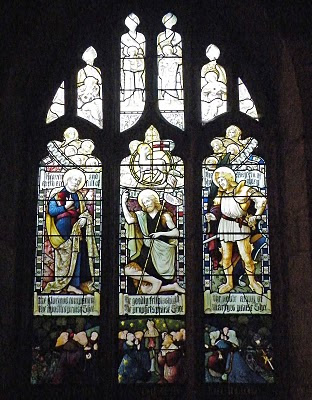 Above. Window with almost colourless panes at the very top.
The following five windows are all to be found in the North aisle, and may represent some of the oldest glass here at Cartmel. 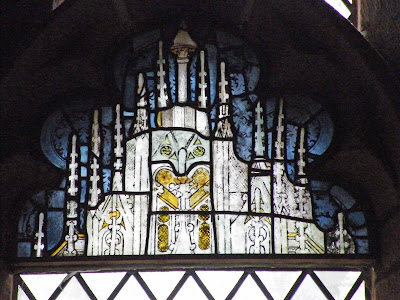 Above. The left hand panel. 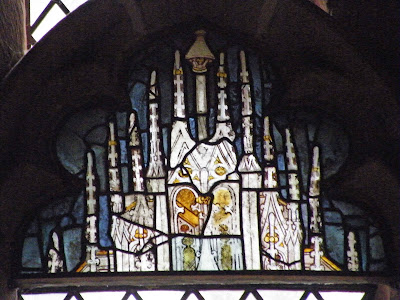 Above. The right hand panel. 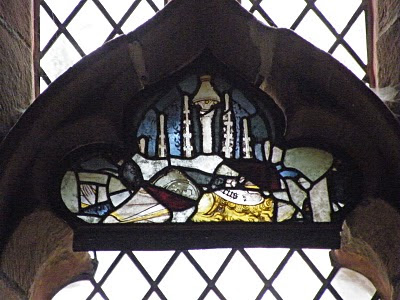 Above. The middle panel.
It is obvious that the glass in this tiny window is a collection of broken pieces from another window(s) There is a small piece of scroll with some writing on it, and some golden hair....possibly with the hind foot of a lion or leopard. There is also a hand (to the left) and other unidentified pieces. 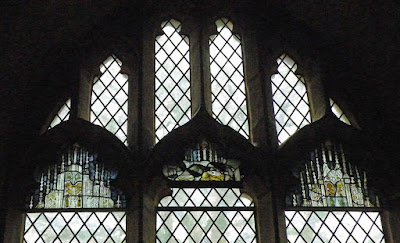 Above. The three windows in-situ. 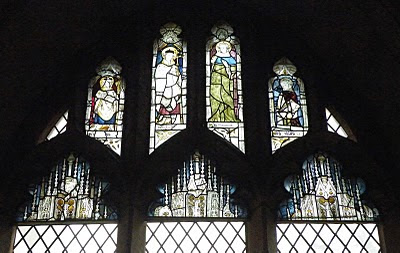 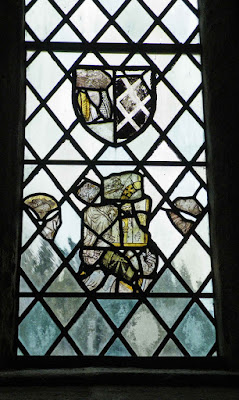 Above. A collection of broken glass.
There is obviously a small fragment of a family coat of arms here in form of half of the shield at the top of the window. The rest of the glass is made of pieces of faces and hands as well as other unidentifiable scraps of design.

Above. Another collection of broken glass.
There are a few pieces that can be identified as parts of a an angel here, as well as decorative glass. 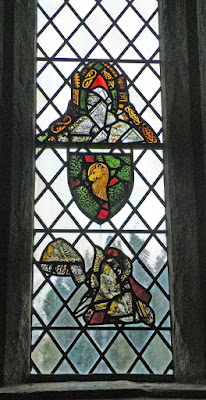 Above. More fragments of stained glass. 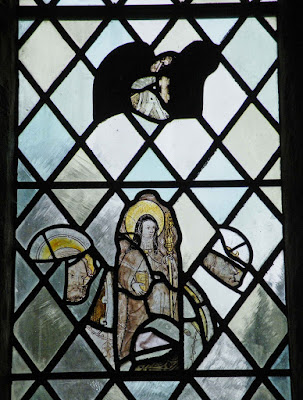 Above. And more fragments.
This small portion of glass appears to have the head of a saint, to the left, with a halo surrounding his bearded face, and, in the centre, a nun or even an Abbess, judging by the ornamental staff she is holding.
The following four pieces of stained glass, all come from the Jesse window, the name alluding to the presence of the Tree of Jesse....a genealogical family history of Jesus, tracing his ancestry back to Jesse, the son of King David! Unfortunately for us, there is only a small amount of glass left from this window....but what there is, is deeply coloured and richly detailed. 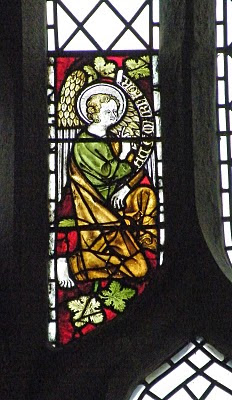 Above. An angel with a scroll upon which is a Latin inscription. 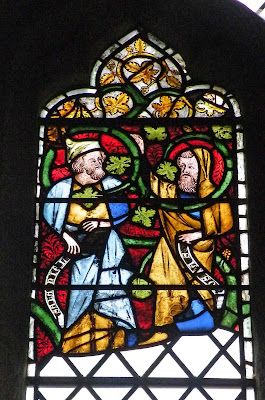 Above. Another fragment of the Jesse window with two characters and yet more Latin. 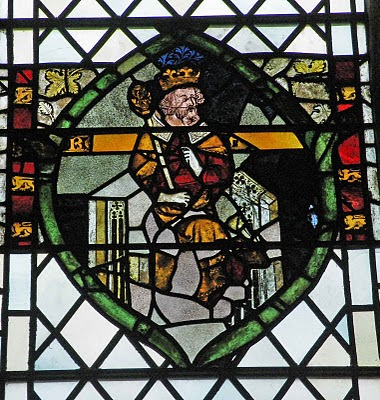 Above. Another fragment of the Jesse window showing a kingly figure holding a sceptre.
To the left and right of this figure, the incomplete representations of Royal leopards in gold can still be seen. 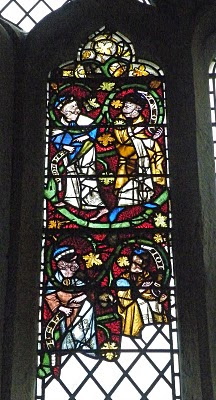 Above. Another fragment, with more characters and Latin inscriptions.
As usual, as more information becomes available it will be posted here....and if I manage to make another visit, I'll try and get photos of the rest of the windows from the Priory.
Posted by The Cumbrian Castle listing. at 18:22

Great photos! It is a good idea to photo-document stained glass windows in public buildings. I usually make a map of the building denoting which windows went in each opening. I also try to get close up detail photos of the windows especially the memorial inscriptions. If I find a signature which can sometimes only be a symbol, I photograph that too. I denote the sizes - to show the scale.

I own State of the Art, Inc Stained Glass Studio http://www.sotaglass.com/. We have had to duplicate stained glass windows from photographs after the windows were destroyed by vandals, storms or fire.

You could look at Penny Hebgin-Barnes, Medieval Stained Glass of Lancashire, CVMA 2009, pp.48=76 on this church