The earthwork remains of Thrimby Grange lay about three miles North of Shap, a quarter of a mile from the small village of Little Strickland and right next to the A6. 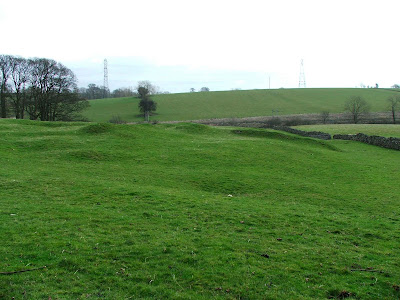 The remains consist of a collection of earthworks in the field at the bottom of the road embankment, and represent the remains of a Benedictine Grange. Granges were farming communities set up by wealthy abbeys or monasteries, to provide food and provisions for the ecclesiastical populations of these places. Thrimby was owned by Wetheral Abbey, until it was sold in 1483. Prior to the manor being owned by Wetheral Abbey, the area fell under the stewardship of Ivo de Tailbois of the Barony of Kendal. At this point in time, most churches in the area were granted to St Mary's of York. However, in 1220, Hugh (?) Bishop of Carlisle, stipulated that the grange should be for the use of the Monks of Wetheral, with the monks here receiving a grant of 100 shillings a year.

After the dissolution of the monasteries in the early 1500's, the manor of Thrimby was passed to the Crackenthorpes of Newbiggin Hall. The farm house that backs onto the remains of the grange probably dates from the late 1500's (possibly 1578) The earthworks seem to have remained surprisingly intact considering the farm is active.

There is no parking near this site, but the earthworks can be viewed from the roadside.
Posted by The Cumbrian Castle listing. at 18:20