Croglin, a tiny collection of houses, lays about fifteen miles South East of Carlisle, on the B6413 and sandwiched between Newbiggin to the North and Renwick to the South. This pretty little church lays a few yards across the road from a house known as The Old Pele, and identified as being an early 15th century pele tower, most likely built as a place of protection for the local vicar, and widely regarded as the most complete example of this type of building in the area.
The church dates from 1878, when the old church, reported as being in a poor state of repair at the time, was demolished and replaced with this red sand stone building we see today. In all likely hood, some of the building materials from the original building were incorporated into the new church. This new building cost £900 and was built to designs by J.Howison of Edinburgh. 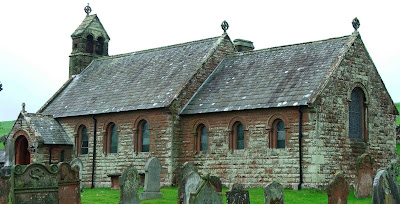 There is a tomb stone in the graveyard to Robert, Bishop of Carlisle, dated 1278, and in the porch, which was unfortunately locked, there is a grave slab dedicated to a woman named as Hisabella, probably dating from sometime between 1250 and 1300.
Posted by The Cumbrian Castle listing. at 21:13