As the A5087 leaves Barrow in Furness, heading out towards Rampside, it passes through an area called Roose Road. The red stone building, shown below, stands on the North side of Roose Road, and as is plain to see, it is no longer used as a place of worship. 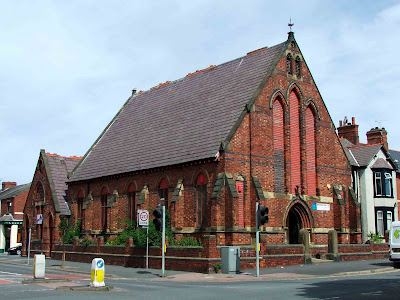 It was opened as a church in 1875, finally closing its doors in 1976. The congregation joined Christ Church on Beacon Hill when the church closed down. According to the Genuki web site the Bible Christians were formed in 1815 after breaking away from the Wesleyans. In 1886, the resident preacher here at Roose Road, was W.E. Gilbert. I'm not sure what the building is used for now, but it appears to be in pretty good condition.
Posted by The Cumbrian Castle listing. at 16:07