This magnificent red church, with its tall thin grey spire, can be found just off the A5087 where it meets the A590. It's a truly massive building and impossible to miss. Built between 1867 and 1869, and consecrated on Whit Sunday in 1869, it was the second Anglican church to be erected in Barrow. In May 1941, it was badly damaged in an air raid, but quickly repaired and re-opened. 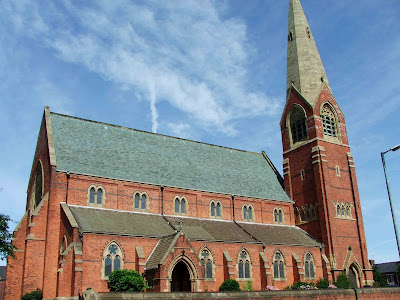 It was built to accommodate 1000 worshippers, with all seats being free and available for anyone wanting to attend services here. The one hundred and fifty foot spire is visible from much of the town. 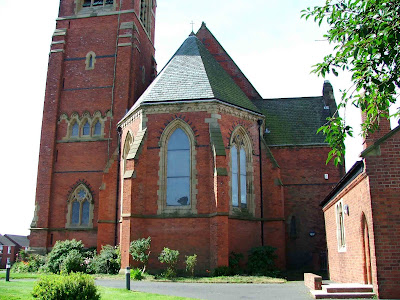 This is the official web site of the church. The site on which the church was built, was gifted to the town by the Duke of Devonshire, whilst the money required for the materials and building work, were supplied by the Directors of the Iron and Steel works of Barrow in Furness. Edward Paley was contracted to design the building....yet another church in Cumbria for which he is responsible. It was during the early design phase of this church, the Edward Paley was joined by Herbert Austin....and the now famous partnership of Paley and Austin was formed. This was another church in this area that did not appear to be left open for inspection.
Posted by The Cumbrian Castle listing. at 20:31