This beautiful church sits on the Western shores of Morecambe bay sheltered behind the sea wall.....a wall that has provided decades of protection against the relentless pounding of the sea. The village of Aldingham has gradually been washed away, so in a sense I think we're luck to still have this wonderful church today. The church, with its small car park, lays less than a mile to the North of the motte and bailey castle which also looks out over Morecambe Bay. 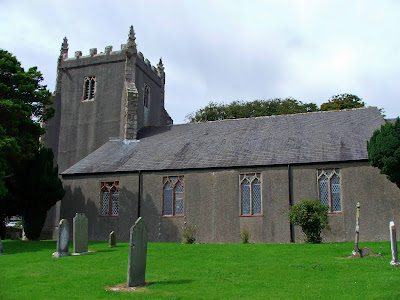 It is likely that the church was founded in around 1147; the surviving portions of this original building are thought to be the round pink sand stone arches and pillars that mark out the South arcade. An additional Norman arch has recently been discovered in the West wall of the South aisle. 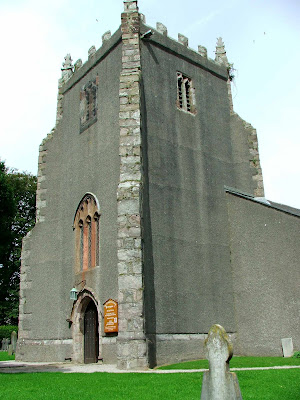 Sometime in the early to mid 1200's, it's likely that the chancel was extended by around 15 feet.... but traces of the original chancel are still to be seen. The tower was probably built in the mid 1300's and at the same time most of the Norman windows were probably removed and replaced. Only one Norman window of this period remains.

A small scrap of Saxon cross has been found built into the east wall just below a window, possibly providing us with evidence of a much earlier church on this site. This cross fragment perhaps falls in line with legends that relate to the time when the monks of Lindesfarne brought relics of St Cuthbert to the England for safety from marauding Viking raiders. Sketchy evidence exists (from a local grave digger) that there are Viking burials on the North side of the grave yard, though there seems to be no documented evidence of any finds. 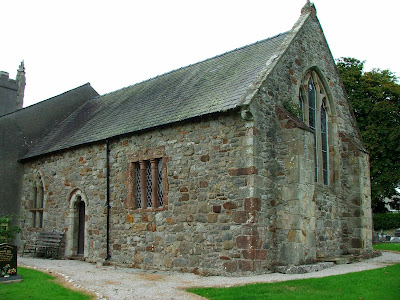 View of the 13th century chancel from the South.

A decorated grave slab can be seen in the chancel, possibly from the grave of Goditha of Scales. See this link The floral design apparently suggests that this stone dates from the late 12th or early 13th century. The grave slab was discovered by the Reverend Dr Stonard when major rebuilding work was carried out on the North aisle in the 1840’s. It was during this period of rebuilding that the West door was opened up, the South porch was demolished, new pews were fitted, the nave was re-paved and a new ceiling was installed. 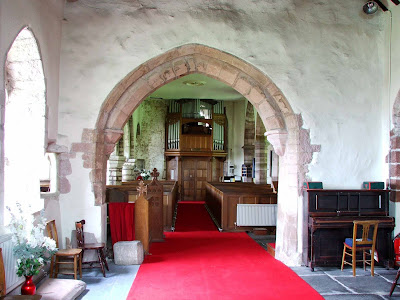 View of the Norman arch looking into the nave.
Two items of interest that should be searched for inside and outside the church. One is the squint, the hole in the wall that joins the nave and the South aisle. This enabled those sat in the aisle to see the vicar as he preached his sermon, and for the vicar to see the congregation. The leper hole in the East wall of the church, is clearly visible from the outside of the building, and also through to the interior just above the altar. Tradition would have us believe that the 'leper hole' was for undesirables to watch the services inside the church, without troubling those sat within the cost confines of the church. 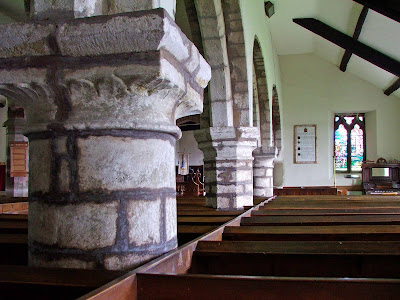 View of the South aisle pillars, probably dating from the 1200's.
Interestingly, the church still retains some of its box pews....a rarity these days. 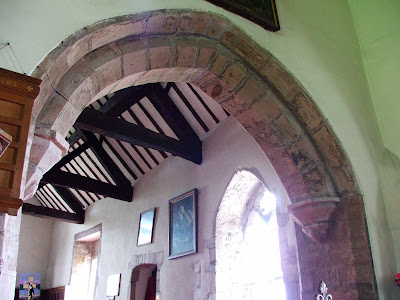 View of the Norman arch separating chancel from nave. 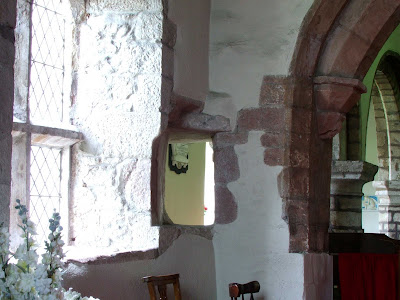 View of the squint looking from the chancel to one of the chapels. 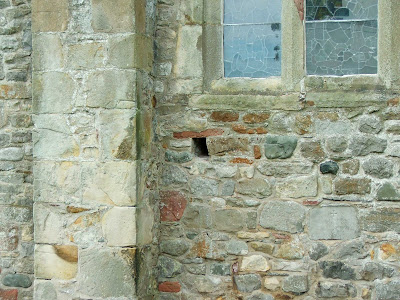 The photo above shows the 'leper squint' from outside the church. 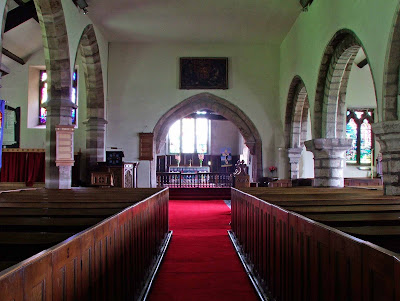 View down the nave towards the chancel.
The church is open most days for visitors to explore, and there is a small car park nearby.
Posted by The Cumbrian Castle listing. at 17:09

This is indeed a beautiful church — simple and bold. How lovely that the sea views have clear glass as nothing stained could outdoor the glory of God exposed in full clarity.
I found not only the church beautiful but the people also.
Many years ago I was given a sort of vision of the ministry God was calling me to. It was of a light shining out of a well-used Bible rather like a lighthouse beaming into the darkness. The first day I entered St Cuthbert's Church at Aldingham (to have a look around) I saw embroidered on the pulpit cloth 'Thy Word is a lamp unto my feet,' (from Isaiah) and I knew that one day I would be preaching in that very pulpit. It happened in a most unexpected way.
Aldingham will always be very special to me.

gessi was brought up just around the corner from this beautiful building ,,,and it was a favourite place of mine when i was a child ,,and my dad and i used to sit and stare out to sea and talk about the future....,
sadly ,my father passed away during my child hood ,,and i have allowed this sacred place to become very special over the years to ,me
where ever i have been living ,,i have always found my way back here habitually to give praise to god ,,and rejoice in the splendour of his magnificence.
and now ,,my girlfriend ,,donna ,,and i , intend to wed in this beautiful place to finally cement a lifelong relationship of love for my church
there is no better place to celebrate our unfnqion and give thanks to the lord that we found happiness.