A poor set of photos spoiled this visit I'm afraid....partially rescued by turning them to black and white images. I'll replace these as soon as possible.

Holy Trinity lays just to the South of the small hamlet of Winster, a sparse collection of houses and farms, a few hundred yards off the A5074 and about seven miles South of Bowness on Windermere. This is a lovely wooded area and the church is in a beautiful secluded yard. This is the second church to be built in the general area surrounding Winster. There is mention of a church here, more probably an oratory (not licenced for full services) in documents dating to 1583, when the parish is part of the larger parish of Kendal, and associated with St Mary's at York. The original chapel was mentioned in 1692, and was described as being "fifteen yards long and eight broad’ and as having ‘one bell in a large square steeple’; which steeple ‘fell upon a Sunday morning in time of Service’, . . . ‘and some of the stones fell upon Ann Comston (Compston) but she was not harmed" (with thanks to the Crosthwaite and Lyth web site) 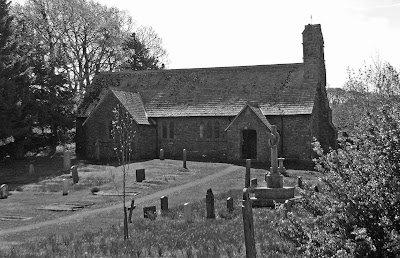 The present church was built on a different site, and dates from 1875. It cost a grand total of £1200, which was raised by appeal to the local parish. The single bell contained in the church is a relic of the original chapel here, and dates from the 17th century. It is inscribed with the initials R.B.W. The church also contains a font of medieval origin, again, probably from the original Winster chapel. 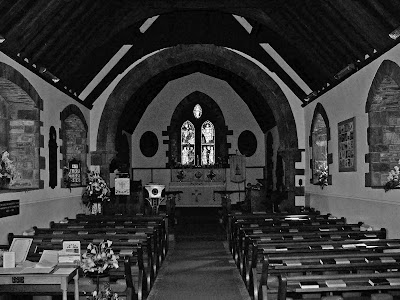 The church contains two stained glass windows....one of which is by Henry Holiday, a renowned artist who worked for Morris and Company in the 1860's and 1870's. He designed windows for a number of churches in the region. Check the link for a list and further links. 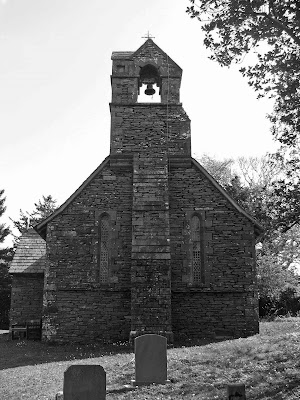 The church was open the day I visited. There is ample parking outside the church yard.
Posted by The Cumbrian Castle listing. at 21:35