Sited just behind the pele tower in the middle of Dalton in Furness, this late 19th century cross occupies the site of an earlier, possibly 16th century market cross. It was erected in 1869\70 and replaced not only the earlier cross, but a whipping post and the town stocks. All three original items have long since disappeared. 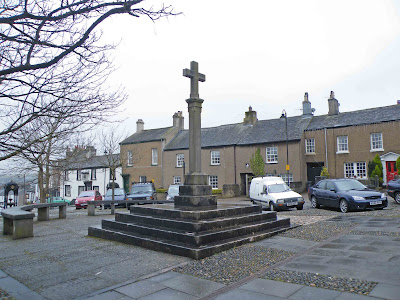 It seems that the original cross was a Saint Andrews Cross on a five stepped plinth. The whipping post was smaller, with a round head and would have stood a few feet away. It was removed sometime in 1859. The stocks were also in this general area and were removed in 1856. The present cross stands to around twelve feet high, and is mounted on a large four stepped square plinth of no particular antiquity. It is reputed that part of the shaft of the original cross from the market place, has been re-used in a gatepost in a nearby meadow. The fish stones, seen to the left of the cross, are semi-circular and made of white lime stone and are relatively new. They were built on the plans of the originals, which have also long gone.
Posted by The Cumbrian Castle listing. at 20:58

You're winning me over to the theme.

Nothing like someone being passionate about what they do!