There are a number of interesting stained glass windows at St Johns in Bentham. The photos below represent most of the windows in the fantastic church.
The first three photos don't really deserve to be here....they're very over exposed, and as a result it's almost impossible to make out any of the dedications in them. They'll be replaced when I next visit St John's. 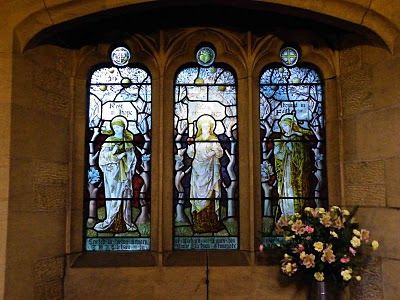 Above. A three light window showing Faith, Hope and Charity.
Why oh why do I never move things off window sills when I take photos....consequently a third of the dedication is unreadable. Anyway....the three panes show Hope (left), Charity (centre) and Faith (right) The text is as follows "Rest in Hope. Follow after Charity. Abound in Faith." There is a dedication, obscured, at the foot of each of the three panes. It reads "Erected in loving memory of Richard Vanes(?) his wife.......E H S Elletson by .....Elletson Stonegate...." If I manage to get hold of the full dedication I'll update the text here. 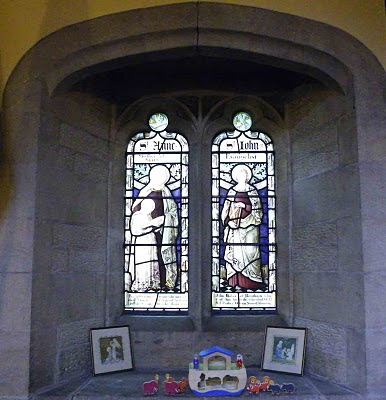 Above. Two light window showing St Anne and St John.
Another poor photo I'm afraid....but it shows St Anne, mother of Mary, and St John the Evangelist. The dedication reads "In affectionate remembrance of John Parker of Bentham who died March.....aged 79 years and of Ann his wife who died Oct(?) 10th.....aged 81 by their son S.J. Parker. Owen Sound, Canada" Note the dove above St Anne and the pelican above St John. 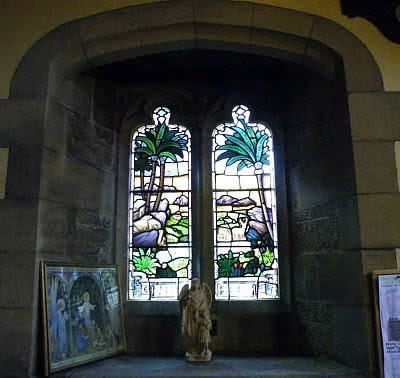 Above. Two light window....over exposed!!
I can't make out the text at the foot of each of the two windows....but if you look closely, you can see two deer in the right hand pane. 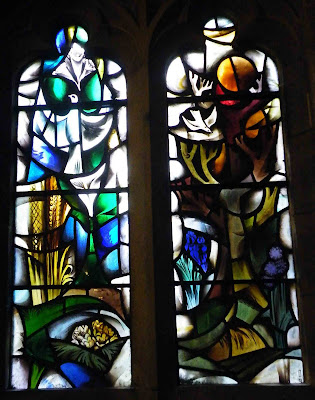 Above. Probably one of the more modern windows in the church. 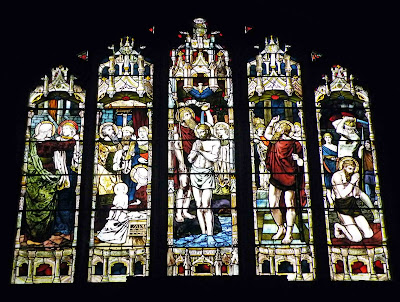 Above. The huge five light East window.
This window was created by Powell of London a few years after the 1876 rebuild of the church. From left to right, each light represents a scene from the life of St John the Baptist: The Salutation, The Naming of John, The Baptism of Christ, The reproving of Herod and The martyrdom of John. 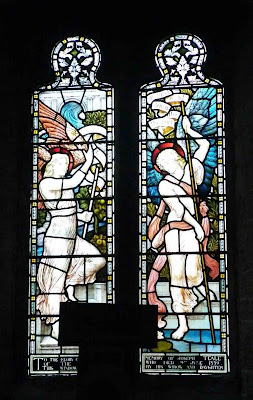 Above. A window, slightly obscured by a cross on the window sill, dedicated to the memory of Joseph Teal, who died in June 1889, gifted to the church by his widow and daughter. This window was also made by Powell of London.
The two light window shows two angels. The right hand angel, with her blue wings and long gold staff, has a scroll above her head, with the inscription "An angel went down to the pool". The angel on the left, with the pale red wings and white staff, also has a scroll about her body, but I'm not able to make out the wording on this. I think this is alluding to the bible story where an angel stirred up the waters so that the first person to step into them was healed of any disease that they had. 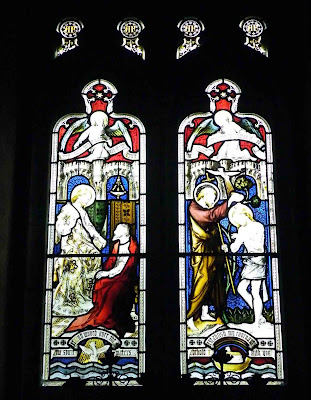 Above. Two light window.
This window contains the following inscriptions. In the left hand pane "The spirit of god moved over the waters. " And in the right hand pane "Behold I establish my covenant with you." The two angels in each pane also hold scrolls with some writing in them, but I've not been able to make out what is written there. 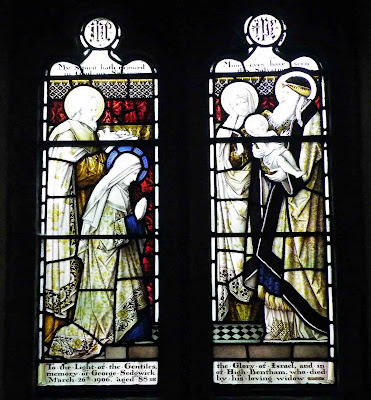 Above. Two light window in the South aisle. Dedicated to George Sedgwick of High Bentham. Gifted to the church by his wife in 1906.
Each of the windows here have a short inscription at the very top. On the left, it reads "My spirit has rejoiced in god my saviour" and on the right it reads "Mine eyes have seen thy salvation". The full dedication, spread across both windows reads "To the light of the gentiles, the glory of Israel and in memory of George Sedgwick of High Bentham, who died March 26th 1906, aged 88, by his loving widow. 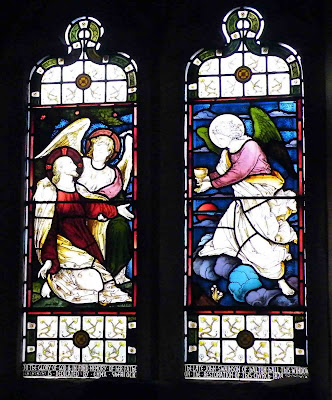 Above. Also to be found in the South aisle, this window is dedicated to John Swainson of Halton Hall.
It was gifted to the church by his daughter, Emma Sherlock in 1878...the same year the church was restored. The window cost £35 to install. The full dedication reads "To the glory of god and in fond memory of her father, the late John Swainson of Halton Hall. This window is dedicated by Emma Sherlock on the restoration of this church, 1878". 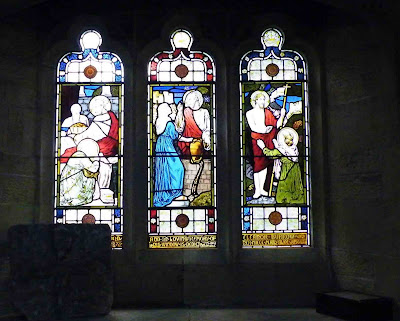 Above. Another window in the South aisle, this time dedicated to the memory of Eleanor Burrow who died in 1873. The window was gifted to the church in 1886.
The full dedication in this window, minus the pane on the left, reads ".....and in loving memory of Eeleanor Burrow......1873 this window is dedicated by her niece Mary Alice jusc(?) 1880".
There are a number of windows that I've missed, so a return visit is necessary at some point.
Posted by The Cumbrian Castle listing. at 21:46