St Michael lays midway between Dalemain to the West, and Tirril and Sockbridge to the East. Barton, rather than being a village, or even a small hamlet, instead consists of a moated farmstead, a few out buildings, and the wonderful church of St Michael. The only way to get to the church, is along the B5230 that leads from Pooley Bridge to the South West, to Sockbridge and Tirril to the North East. The church is surrounded by a ring of trees, with an opening facing East, and because of this, cannot be seen when travelling up the minor road. There is ample parking here, so there's no need to leave your car further to the South. 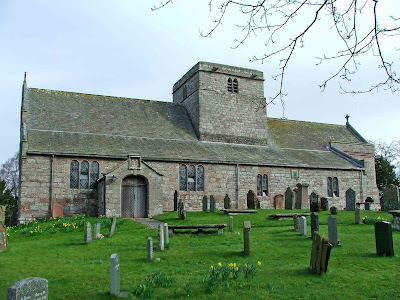 Above. A view of the South face of the church.
The first thing that strikes you about the church, is the tower, which seems to hang over the roof. Indeed, this part of the building is one of the earliest parts, built sometime during the 12th century, possibly in 1150 when records tell us that the church here was founded. Its base walls stand within the confines of the church, providing a bizarre 'blockage' between nave and chancel, the beautiful Norman arches linking the West and East ends of the church. The nave wall to the West of the church, also dates from this time. It has been suggested, that when the tower was built, it was built with defence, or at least refuge in mind, but this is pure speculation....many early Norman church towers are assumed to have had this role! Check this link out for some more details on the possibly defensive role the tower may have played, along with other possible fortified ecclesiastical buildings in Cumbria.

Above. A view of the North face of the church.
The width of the tower within the confines of the 13th century walls, give an indication of the width of the original Norman church, possibly covering about half the area the church we see today occupies. 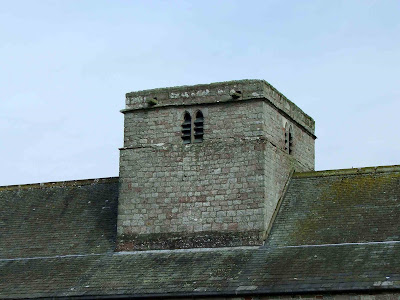 Above. A close up view of the tower, now protruding through the roof. 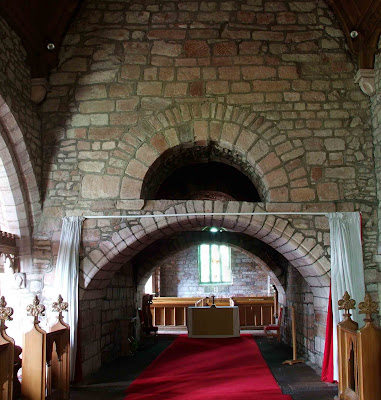 Above. A view through the central tower, looking towards the chancel at the East end of the church. 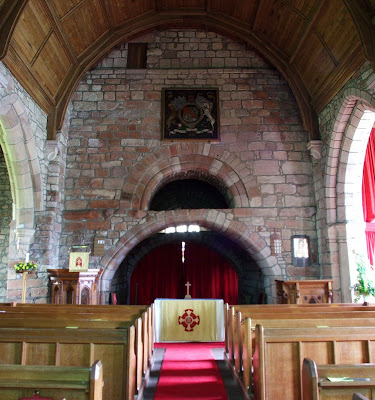 Above. A view looking from the Chancel to the tower arch.
The Royal arms visible above the archway, are those of King George II, and date from 1730.

Above. A panoramic view looking towards the central tower from the Chancel.
The above photos shows the extraordinary arches built into the tower when the chance was extended beyond the tower's walls in the 14th century. Local historians think that the work was carried out by Augustinian monks, possibly due to the quality of the workmanship and more likely due to the fact that the church was owned by the Augustinian order at this time. 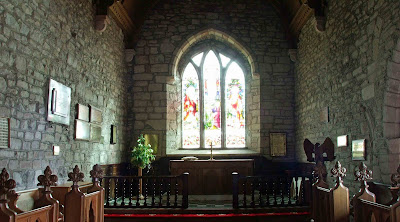 Above. Looking into the 14th century chancel.
The chancel is situated in a part of the church dating from the very late 1300's, with a three light window above it. The stone work of this window, dates from the 14th century, but the glass in it, dates from 1913....it is shown below (second photo) 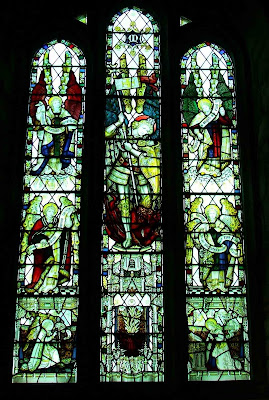 Above. A window depicting several angels, with St George standing astride a defeated dragon, in the centre. 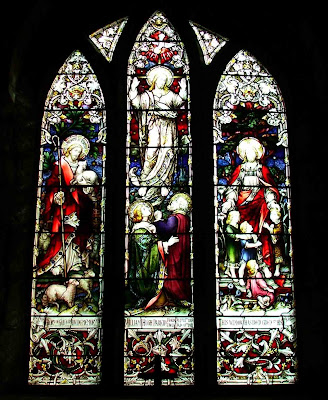 Above. Chancel Window dedicated to the memory of William Hugh Parkin, who died in 1911. 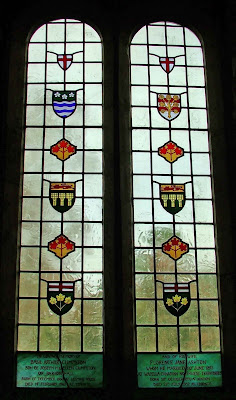 Above. Window dedicated to Basil Arthur Cumpston, son of Joseph H. and Ellen Cumpston of Barton Hall, who died in February 1962, and also to his wife, Florence Jane Ashton, who in turn died in July 1952, in Toronto, Canada.

Luckily for me, the church was open on the day I visited, though I'm not sure if this the case normally.
Posted by The Cumbrian Castle listing. at 20:49