This beautiful sandstone building can be found on the North banks of the River Dee as it winds its way through Chester. As you walk along the river bank, the first view of the building, is through a wooded area, a screen of trees breaking your view. 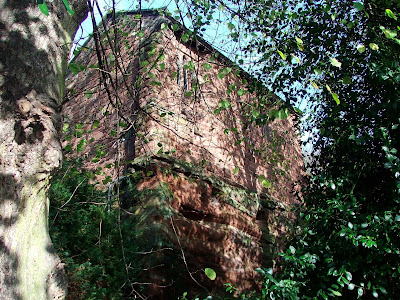 However, if you continue walking along the river bank, and instead of crossing the Dee on the footbridge, take a left up the steep path, an unblocked view can be had of the building out across the old bowling green.

The building has been built on a sandstone outcrop, and was erected in 1363. Legend has it that after the battle of Hastings, King Harold, wounded but not dead (as history would tell us) was brought here to live out the rest of his days. However....the building is thought to have been the retreat for an anchorite, or religious hermit. There is also evidence to suggest that it may have been a private chapel, or an oratory, much the same as Keld Chapel near Shap in Cumbria.
Posted by The Cumbrian Castle listing. at 16:26