The jointly dedicated church of Holy Trinity and St George sits on the East banks of the River Kent on New Road. As can be seen from the following photo, the church can be seen from many parts of Kendal. This photo was taken from Castle Hill, some three quarters of a mile to the South East. 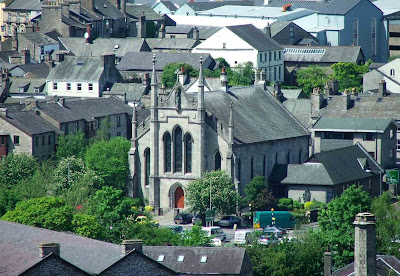 The church has three high arched windows positioned over the doorway, tall pinnacles on the tower, and tall arched windows down the North and South walls. It is a typical Webster church....many of their churches bear the same basic designs. Inside, the church is brilliant white, and together with the multitude of windows, makes for a light and airy interior. What decoration there is, is relatively muted, especially in colour. There are small splashes of pink, mainly the panels in the stepped niches above and behind the altar. 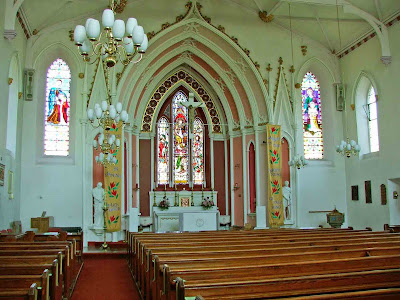 The gallery to the rear of the church is especially spectacular, and is lucky to survive. Most churches in the area seem to have had their galleries removed as congregations dwindled. The survival of the gallery means that the church has managed to provide a meeting room on the ground floor, as well as an interior porch. 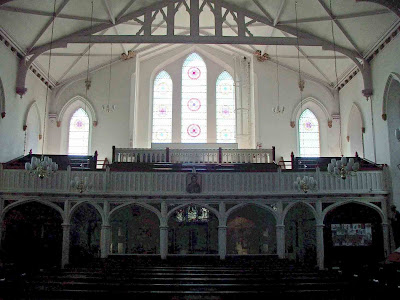 The church was built between 1835 and 1837 to designs by George Webster, and was built to replace a tiny chapel based in a building a few yards away. I believe that the following two photos show this building, although I welcome any corrections that anyone cares to make!!! 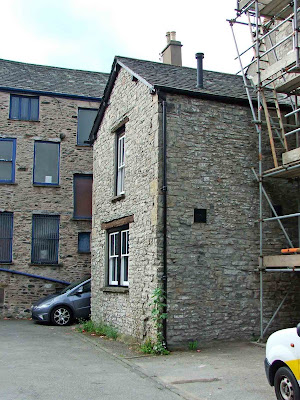 I think that the building in the foreground is the old Catholic chapel. It was also used as a warehouse at some point in its past. 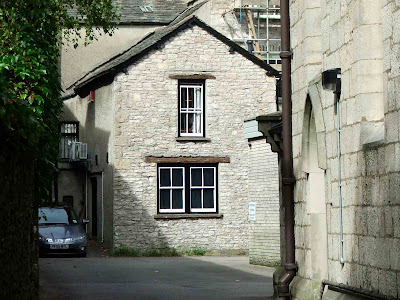 The relief, shown below, can be found on the outside wall of the Parish Centre. 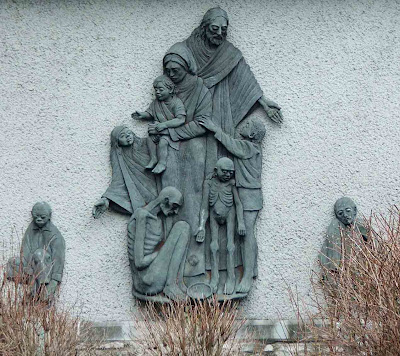 The parish centre was opened in in 1988, and stands to the right hand side of the original church. The relief shown above (constructed in fibreglass) most likely shows the holy family (Mary, Joseph and Jesus) surrounded by the poor of the world, shown as emaciated figures at their feet. The work of art was created by Ray Schofield, a celebrated artist in the Morecambe Bay area, producing works such as this, tapestries and also illustrations for books. 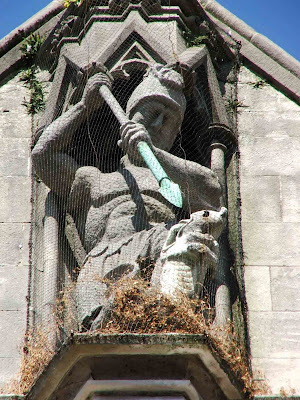 The church's patron, St George, can be seen high up on the front elevation, slaying the mythical dragon. Created by Thomas Ducket who was employed by the Websters in Kendal, it is perhaps the most decorative exterior piece of architecture on any of the Webster's churches! There are an additional two pieces by Thomas Ducket in the church. To the left and right of the niche in which the altar is set, Ecce Homo can be seen on the right, and St George can be seen on the left. 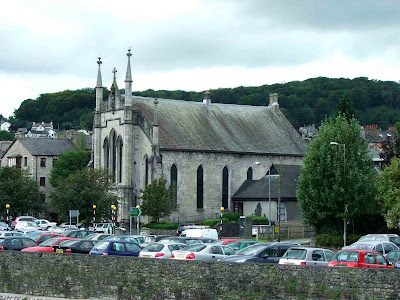 The above photo is a view of the church from across the River Kent, from Goose Holme. As the church is a busy Catholic church, it is open most days. The two or three visits I've paid it have been easy and unchallenged....though I would bear in mind that there are regular daily services.
Check out their own website.

Many thanks to Father Paul Embery, Parish Priest, for the additional information on the relief.
Posted by The Cumbrian Castle listing. at 23:41