This small church is truly one of Cumbria's church gems. Small but perfectly formed it sits in beautiful surroundings and backs onto one of the regions most intriguing castles. The church of Holy Trinity lays about a mile and a half North of the town of Millom, just off the A5093. The photo below, shows the church from the South. The large darker building to the rear with the double roof is the pele tower, built in the centre of the ruins of the castle. This view shows the 14th century South aisle, with the 13th century chancel to the right. The church appears to be built on the summit of a low hill...possibly the motte mentioned in some sources as the site of the original castle here. There's every possibility that the original church, built by the de Boyville family of Millom Castle, was built as a manorial chapel in the bailey of the original fortification. The earliest parts of the church are the nave, at the North of the building, and dating from the 12th century. These remains consist of the North wall, a small portion of the West wall and a window, re-inserted into the North wall of the chancel. There is also a 12th century doorway, now blocked up, mounted in the South wall of the South aisle. There is a low blocked archway in the nave's West wall, which, some historians suggest, points to the suggestion that the church had a tower at some point in the past. No trace of this structure remains.

Another view of the church from the South, showing the massive windows in the South aisle's South wall, and the bricked up 12th century doorway. The blocked window to the right of the photo, was probably blocked by the Huddlestone family when they took possession of the castle in the 1240's. The blocked window was used as a backdrop for some family monuments. 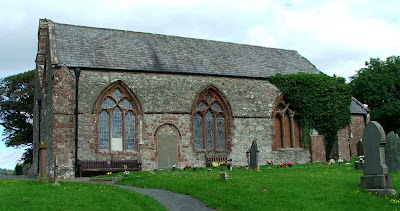 Outside in the churchyard, a medieval sundial can be found. The top has four faces, each with family shields carved on them. There are two shields of the Huddleston family, one of the Chaucer family, and one of the Broughton family. The top of the sun dial has a morticed top, probably for a metal sundial to be mounted there. The sandstone base is probably a later addition. 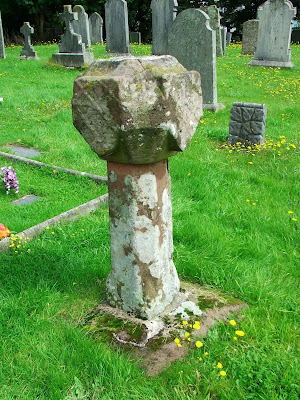 A cross base can also be found in the church yard...again, probably medieval. The stone has some damaged carvings on its sides, and a square socket in its top in which the cross itself would have sat. Both the sundial and the cross base are Grade II listed. 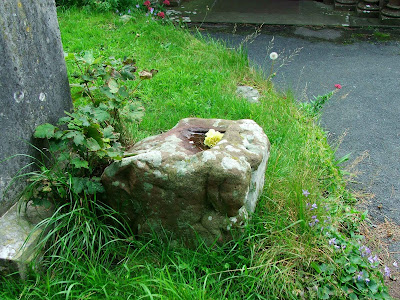 The church, internally, is a 'must see' with many items of interest. Unfortunately, Holy Trinity is locked, and only open for services. I will return at some point to photograph the interior, and these photos will take the form of 'part II' of this post. There is ample parking next to the farm, which entails a short walk to the church.
Posted by The Cumbrian Castle listing. at 21:44