Kendal has no shortage of churches and chapels...many of which are still in use as places of worship, others have been converted to accommodation. One of the oldest places of worship still surviving, and still in use today, is the Unitarian Chapel, set back off Branthwaite Brow, behind the George and Dragon inn. 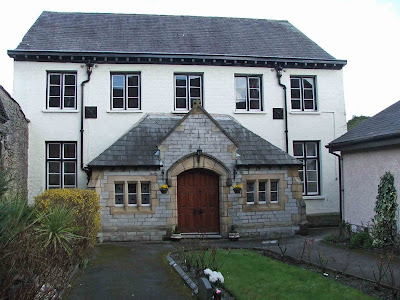 Grade II listed, along with the school room attached to the rear of the chapel, the building was erected in 1720....the building date can be seen on the cast iron rainwater heads above the porch. Caleb Rotheram, the first minister of the chapel, broke away from the Presbyterian congregation of Fellside in Kendal, and moved his followers into the newly built chapel at the top of Branthwaite Brow. As the Presbyterian congregation here slowly moved away from ideas of the holy trinity and the divinity of jesus their ideas slowly aligned themselves with the Unitarian movement. The chapel became openly Unitarian in the early 1820's. Caleb's gravestone can still be seen in the yard at the rear of the chapel, along with dozens of others. Caleb Rotherham raised the money to build the chapel privately...a grand total of £166. Another £94 was raised from the sale of seats...and once these were in place in the chapel, they remained the property of the purchasers. 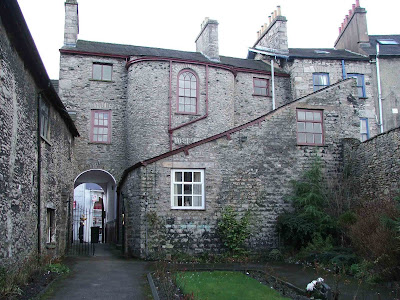 The above photo shows the rear of the clothing shop on Branthwaite Brow, Edwards's.....which was built in 1781, and was home to the minister of the chapel. 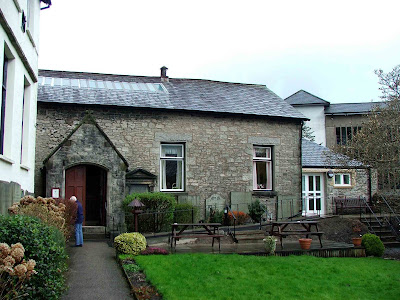 This is the school room at the rear of the chapel....built by Caleb Rotherham to provide training "for the ministry at eight guineas a year". 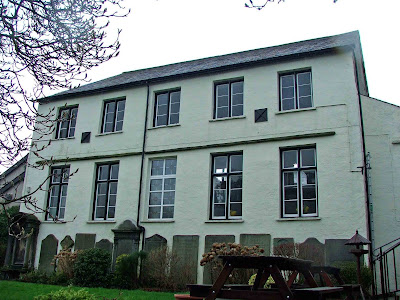 View of the rear of the chapel showing the many head stones...now removed from their original laying places and presented against the wall of the chapel. 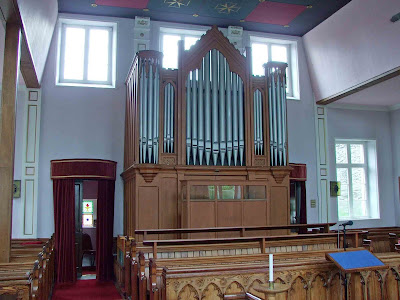 Interior of the chapel showing the organ and the decorative pews. 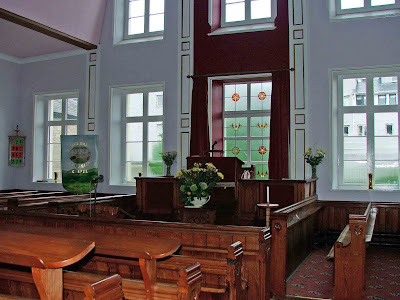 View of the altar with the tiny stained glass windows behind it.

This stained glass window can be found in the South East wall, spread across two tiny windows. The chapel is not normally open...except for services. If you visit on a Saturday, there is a free tea\coffee morning, and the inside of the school can be seen.
Posted by The Cumbrian Castle listing. at 11:55