The Sepulchre can be found on the West side of Kendal...just off All Hallows Lane and Beast Banks. A Sepulchre is defined as a type of tomb or sometimes, a burial place, and in this instance, the site is a burial place dating from the mid 17th century. Sepulchre Lane, which runs along side this small enclosed area, runs along a medieval chapel close boundary, and would most likely have once served the chapel that stood nearby...now simply represented by Chapel Close a few yards to the West. 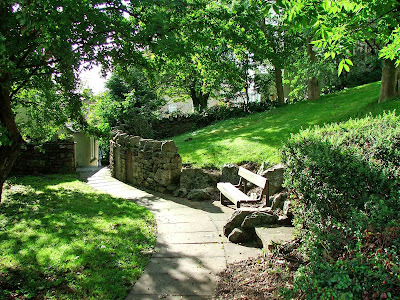 This area was bought by the Kendal Quakers in 1656, for the sum of £9 and 3p. A local story tells us that it was extended at some point, to accommodate Underbarrow's Quakers after their own burial site was apparently ploughed up by a disgruntled member of their congregation. During the 17th and 18th centuries, the Quakers of Kendal were not allowed to bury their dead in church yards or cemeteries, and were obliged to therefore find alternative 'out of town' burial sites. A 1662 act called the 'Five Mile Act' forbade Quakers and other non-conformists, from entering towns such as Kendal, and especially from burying their dead within the town boundaries. 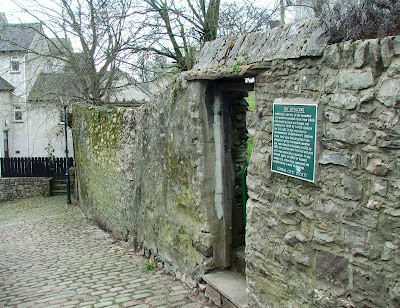 It's a surprise then that the Kendal Quakers were able to buy this small area of land on Fellside, well within the five mile exclusion zone, and dedicate it as a burial site.

In 1855 the Sepulchre was closed to further burials. Existing graves were levelled, and head stones removed, and the area was turned into a garden. I'm not sure if the burials were removed, or simply grassed over....but the only real clue to this once being a burial ground, are the three head stones now built into the retaining wall at the bottom of the hill in the garden. You'll notice from the photo of the headstones, that only the number of the month in which they died is mentioned....this was due to the fact that the Quakers would not make reference to any pagan gods....the names of the twelve months being derived from the Roman pantheon of gods.

In 1989, local building company Russell Armer Ltd bought the land when the neighbouring school was converted to housing. The garden was tidied up and presented more or less as it is seen today.
Posted by The Cumbrian Castle listing. at 20:07

In my various wanderings, I have found that most Quaker burial grounds don't have headstones. The most notable exception being the burial ground at Barrow Wife on Cartmel Fell (grid ref SD 40759 84858) which had a good few. Regards Tony H