This huge church lays in the village of Greystoke, some eight miles West of Penrith on the B5288. The village is set around a cross roads, with the main road, the B5288 running to the East towards Penrith, and to the South towards Penruddock about two miles away. The second road, roughly following the course of the old Roman road, is called Berrier Road as it runs into Greystoke from the South West, and leaving the village at the Northern tip splits towards Little Blencow to the North East, and Johnby to the North West. The church sits at the Eastern side of the village, and is visible across the fields from the B5288 as you travel into the village from the South. The church’s dedication to St Andrew is probably due, in no small part, to the fact that this part of Cumbria was in Scotland, as part of Strathclyde before the Norman conquest and obviously Andrew was, and still is, the patron saint of Scotland. 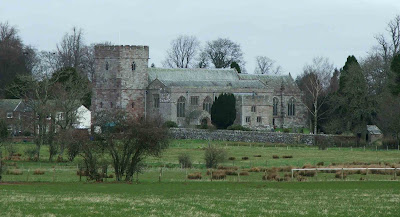 The church has been linked with nearby Greystoke Castle since it was built, and although historical records only mention a church here from 1255, there may have been a place of worship here much earlier. The 14th Baron Greystoke, William, financed the building of a small church here, but his ancestor, the 10th Baron Greystoke’s tomb is probably the oldest known remains in the church, buried beneath the floor near the altar.

In the mid 13th century, around 1255, Thomas de Vipont, then the Rector at Greystoke, was elevated to Bishop of Carlisle. The church here was then only second in the whole of Cumbria in terms of wealth, to Carlisle Cathedral. The church at this time had a huge central tower, but with the addition of chantry chapels at the North and South of the chancel and nave, the tower was moved to the West end of the church, changing the shape of the whole structure. It have been that the original central tower was built with a certain degree of defence in mind…not so much a pele tower, but more as a place of refuge, much the same perhaps, as St Andrew’s tower in Penrith. It is unfortunate that no drawings of this original building exist.

View towards the West end of the church

During the 14th century, eight priests and a provost were appointed to the church as a college was established here. The priests were sent out into the surrounding areas to spread the word of god and to offer a certain level of education to those who would not normally have been able to afford it.

View towards the Chancel

The college and the chantries were abolished at the Reformation. It’s interesting to note that, in more recent times, 1958, a modern college was established here, with the intention providing theological training…..with the result that around 90 men successfully passed through the college and were ordained into the Church of England. The college eventually closed in 1979. 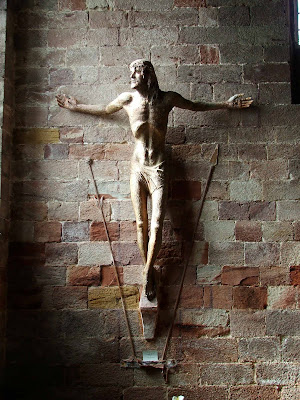 Probably one of the most important works of art in the church, is the figure of the crucified Christ on the West wall. This is the work of Josephine de Vasconcellos. Her work can be found in many churches across Cumbria. 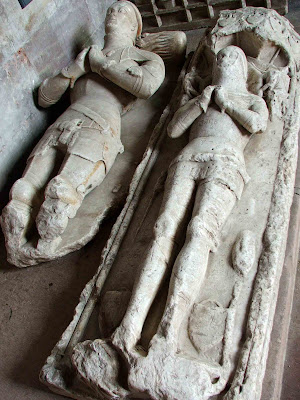 The stained glass windows contain a large amount of medieval glass, with local tradition telling us that when Cromwell’s New Modern Army was in the area, it was well known that decorative windows were being destroyed along with other items of an ‘impure nature’. The locals removed the glass from the windows in a hurry, buried it and left it until the danger had passed. The windows were not restored until about 1848, and by this time, it was almost impossible for all the windows to be put back together in their original forms. Where pieces were missing, they were substituted with other pieces of glass, making for some interesting new windows! 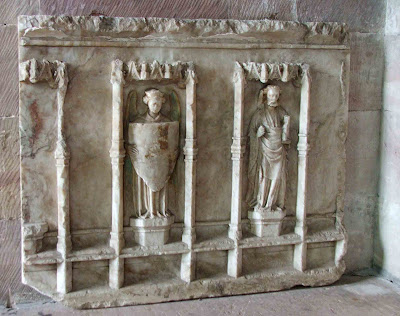 John Dacre was the last provost of the medieval College, and his tomb once occupied the chancel recess shown here. It is now occupied by the effigies of Baron William, the founder of the college, and his grandson, John. 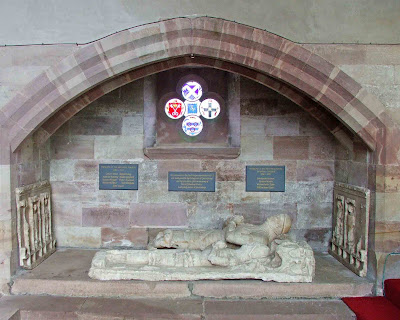 There are a number of relics from the medieval building that once stood here. These include several small piscinas, where communion vessels would have been washed. These generally mark where the chantries would have stood. There are also a well preserved set of sedillia set into the South wall of the Sanctuary. These seats would have been occupied by the priests during masses. The Sacristan’s house, now in use as the vestry for the clergy and the choir, still retains its 15th century fireplace and a beautiful leper’s squint (hagioscope) There is a 14th century oak table standing by the vestry door, which was originally housed in the college refectory. 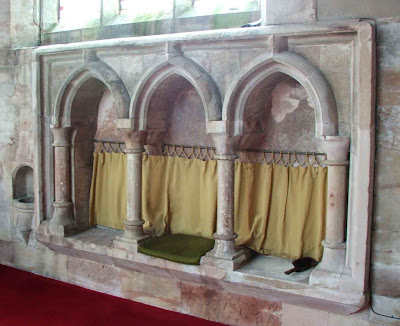 The church appears to be left open for inspection, and is well worth a visit.
Posted by The Cumbrian Castle listing. at 21:05