A trip to Silverstone to see Jenson come in a credible 6th place, saw me able to visit this fantastic church in Marston Moretaine, some 10 miles East of Milton Keynes and just off the A421. The first thing that strikes you about this church, is that the North tower is detached from the rest of the building...laying some 70 feet away. The nave and chancel, laying to the South of the tower, lay on the normal West-East axis and are Grade II listed. 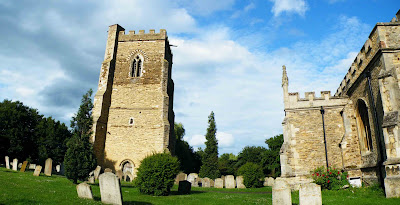 The nave and chancel probably date from the early part of the 14th century, with 15th century additions and alterations and some 19th century re-building. These two areas are built mainly of limestone (probably the grey areas) and 'ironstone'(probably the red areas) The chancel, built sometime around 1340, was rebuilt in some sections, in the 15th century, and restored by Sir Gilbert Scott in 1873. There are a number of 15th century windows, plus one 14th century window still in situ. A window in the South wall of the chancel contains a stained glass window designed by Edward Burne-Jones. Unfortunately the church was locked so I was unable to gain access. 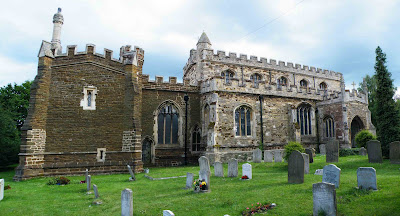 The tower is Grade I listed, and is dated to sometime in the early 14th century. It is thought however, that the tower may have earlier masonry incorporated into its structure...some web sites mention an earlier Saxon building\tower. The lower walls are nearly 2 metres thick, and this impressive thickness, along with a lack of windows at ground, first and second floor levels, plus the fact that the West facing door opens onto a vaulted chamber has led some historians to suggest that the tower may have started out as a defensive structure...or at the very least, a place of refuge for the local population. 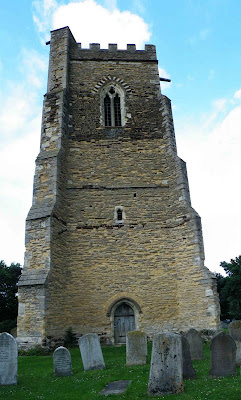 The photo below shows the opening below the window in the South facing wall of the tower. It is most likely that this was once a door, opening either into an adjacent building or onto the roof of whatever once lay here. 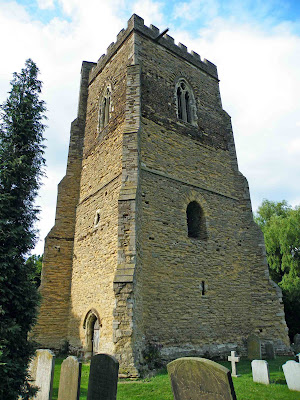 The huge buttresses server to exaggerate the size of this tower.

The photo below shows the North and East walls of the tower, with the church building to the left of the photo. There are numerous very narrow single light windows all around the tower, including to the right of the wall....where the stair turret is built into the North West angle. 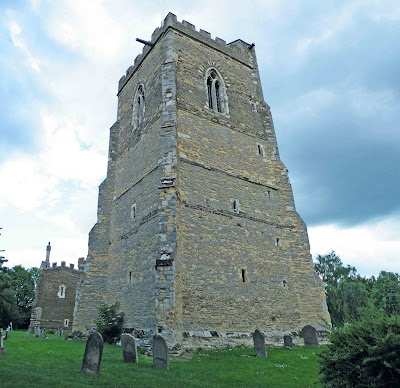 Unfortunately both the church and the tower were locked, so I was unable to check the interior of the tower.
Posted by The Cumbrian Castle listing. at 17:44 No comments: