This fabulous Victorian church is to be found on Duke Street, on the West side of Barrow. The church was founded in 1858 but wasn't opened for worship until some nine years later in 1867. Built to designs by E.W. Pugin, it was built on a site donated by the Duke of Devonshire. The building costs amounted to a grand total of £6000. The original church was built without a tower or a spire, check out the link for an early view of the church pre-spire at this web site. 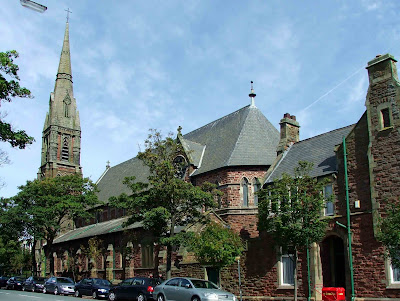 The steeple was added to the tower in 1888. All in all, the church was built to provide seating for eight hundred people, and with the organ, added in 1881, St Mary's became one of the focal points for Christian worship in Barrow. Although the church appears to be open for inspection, there are daily services during which you are not permitted entry unless taking part.

Posted by The Cumbrian Castle listing. at 15:46