Stained glass at Jesus Church
Troutbeck
Cumbria
This small church has to have some of the best stained glass I've seen in Cumbria to date. The jewel in the crown is the East window, consisting of work by Sir Edward Burne-Jones, Ford Maddox Brown and William Morris. 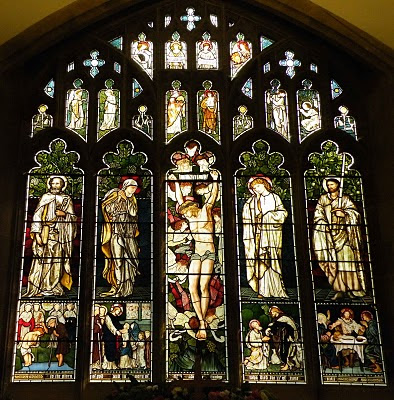 Above. The fabulous East window with work by Burne-Jones, Brown and Morris.

Above. A window showing, I think, Jesus healing the sick.
The inscription at its foot reads, "To the Glory of God, and in memory of John Wilson ESQ..............was placed here by his daughters." Unfortunately the flowers are in the way or part of the inscription\dedication.

Above. Jesus blessing St Peter.
The inscription reads, "In memory of Roy William Sewell, 40 years vicar of Troutbeck who died 31st of July 1869, aged 88 years. This window is --- as a token of filial(?) affection by his son, Robert Sewell" As I managed to decipher some of the text, I'll correct this entry....the letters are a little faded in places.

Above. A nativity scene....the birth of Christ in the stable.
The window has the following dedication at its base, "To the glory of god and in memory of Lieutenant John Wilson R.H. who died Feb 16 1865 at Nelson, New Zealand. This window was placed here by his sister Charlotte."

Above. A window depicting Jesus as the Lamb of God. Note the Agnes Dieu at the top.
The inscription at the base of the window reads "In memory of James Longmire of Longmire --------who died 13th July 1861, aged 49 years."

Above. An Edward Burn-Jones window.
I think it's safe to say that this is an Edward Burn-Jones window, judging by the style of the figures. It appears to show a saint being held aloft by a host of angles with brilliant red wings, with another two earth-bound angles beneath. The inscription reads "To the glory of god and in loving memory of Daniel Irvine Flattely who died at Holbeck Cottage Oct 21st 1897."

Above. Unidentified window. I should have moved the flowers.

Above. A beautifully coloured window from the nave.
The dedication on this window reads as follows "To the glory of god and in loving memory of Elise and William Grimble Groves, of Holehird in this parish, entered into rest 3rd of October 1918 and 24th June 1927. I wonder if any of the Grimble Groves family are still living in the area...what a fantastic surname!

Above. A window appearing to show Jesus blessing either sailors or fishermen.
The dedication in this window reads "Of John Sargent who died at by his devoted daughters." This is obviously an incomplete dedication, meaning that the window has either moved from its original location where it was part of a two light window....or the rest of the dedication is contained within some of the windows that had flowers in front of them.
Posted by The Cumbrian Castle listing. at 17:27

These encourage me to go there and see for myself.

I have an L.P., "Stainer's Crucifixion." I bought it around 1970, and the album cover depicts the east window of Troutbeck church. I have always loved it, and was in Cumbria last month...we visited Troutbeck but could not find the church!

There are two Troutbecks in Cumbria. The one you want is above Windermere, on the A592 (leading to the Kirkstone Pass). The East Window is astonishing.