The church of St Mary in Kirkby Lonsdale is a mixture of 11th to 18th century building, extension and renovation. It is however, not the first church to exist on this site near the river. It’s mentioned in the Domesday book that a small Saxon church stood on the site of the old Middleton Chapel (in the North East of the current building) and in 1093, documents mention that Ivo de Taillebois, first Baron of Kendal, gave the church at Cherkeby Lonnesdale and lands joined to it, to the Abbey of St Mary in York. It’s also most likely that around this time, the church stood in the bailey of the castle that now stands ruined and partially destroyed just off Ruskin’s brow. 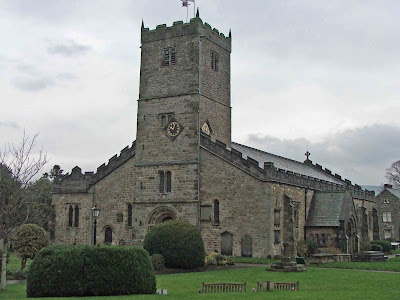 As is the case with many Norman Motte and Bailey castles, the manorial chapel would have been an integral part of the manor, defended by wooden palisades and earthen ditches and ramparts. 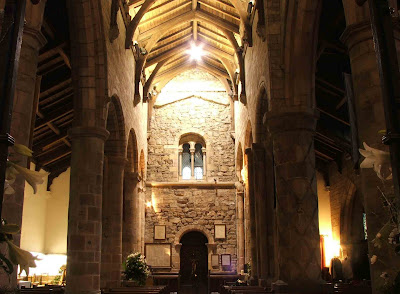 Above. View of the tower from the chancel.
These days, the church is an architectural gem, with aspects of its 900 year history tucked away in nooks and crannies, just waiting to be found. Here are documented a few of these gems, although this isn’t an exhaustive list….I’ll need to return to collect more photos. 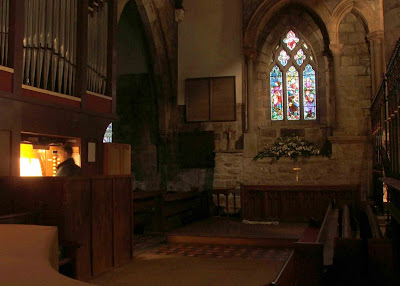 Above. The organ in what was the Middleton Chapel.
The right to approve and appoint the vicars of Kirkby Lonsdale’s church belonged to the Abbey of St Mary’s in York from 1093, right up until the dissolution of the monasteries under Henry VIII. It is for this reason that documentary evidence exists of vicars appointed to the church in an almost unbroken run from 1245 to the present day. The only break in this record is the 10 year period of the Commonwealth under Oliver and Richard Cromwell. 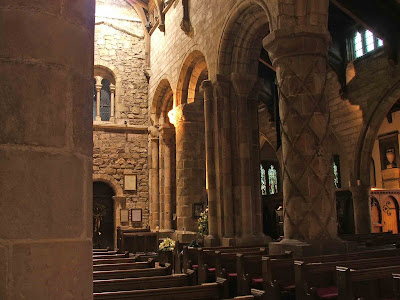 Above. Looking into the nave.
The oldest parts of the church are Norman, late 11th or early 12th century. The remains of the church of this period are located just inside the door. The three arches and pillars on the Northern side of the Nave are instantly recognisable as different from their neighbours. These pillars were probably built around 1130, and are said to be almost identical to those in Durham Cathedral. It is thought likely that the obvious difference between the ornate 11th\12th century pillars and the blander ones is down to a lack of funds when the church was being transformed. This period probably saw a halt in the building work while funds were gathered to finish the building. 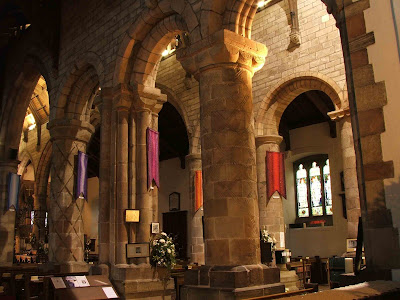 Above. Norman pillars in the nave.
What remains of this extravagant piece of building, are octagonal bases supporting round pillars decorated with a diagonal hatching from top to bottom. Each pillar is topped with decorated headings with horses, green men, centaurs (half man half horse), vines and leaves….and I think there may even be a lion in there too!!! 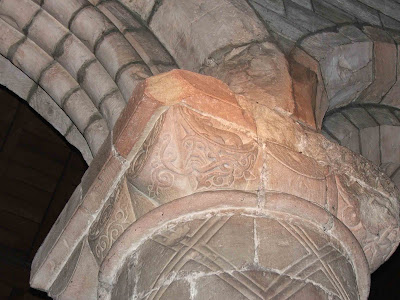 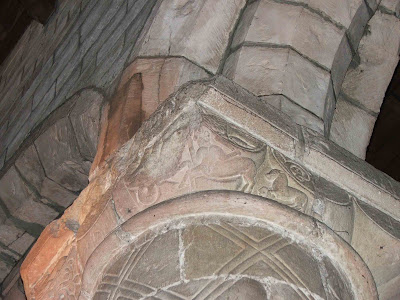 Above. Close up of the carvings on one of the capitals, showing a centaur type creature. 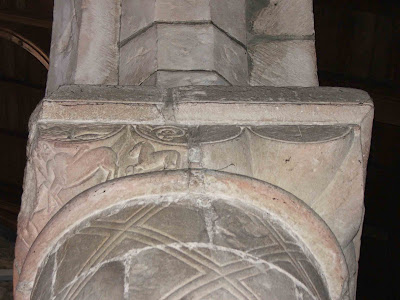 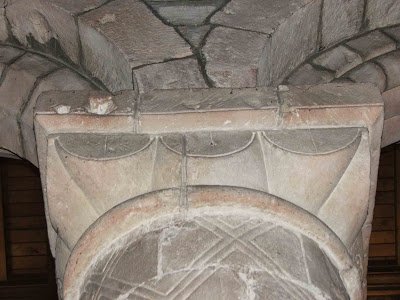 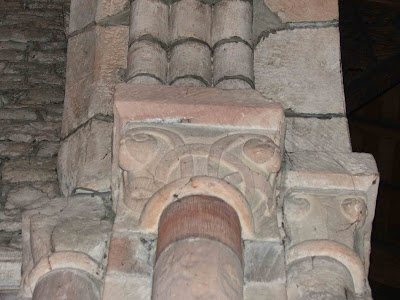 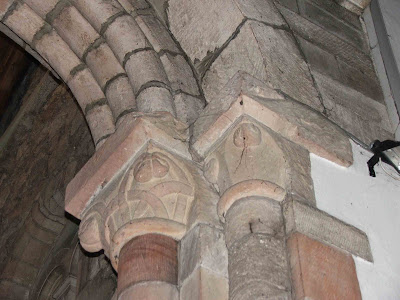 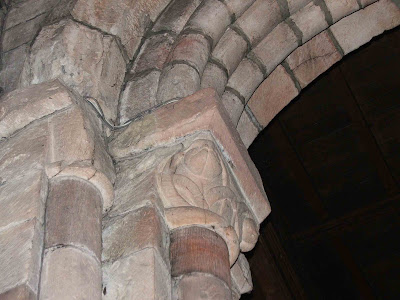 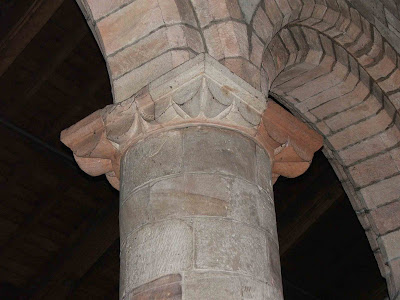 The South and the North walls of the church tower are of the 12th century, although it has undergone much rebuilding and renovation, the most recent work being done in 1705. Looking at the stone work on the exterior of the tower, it's plain to see that the first two storeys are probably Norman, or at least of a much earlier build, whilst the upper two storeys are of the later 18th century build. 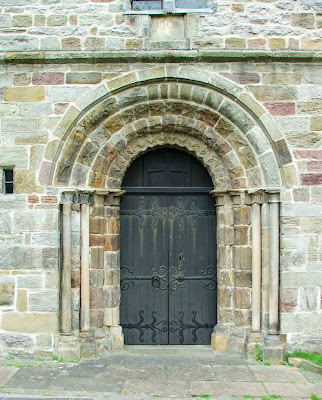 Above. The Norman door in the tower.
The outer door of the tower is believed to be a Norman remanent of the original church. The door has saltire crosses, archers and a dragon carved into the soft sandstone. The door has had its share of renovation however, and appears now to be a mixture of early Norman work and some later stone replacements. 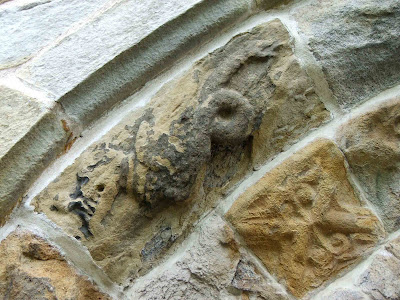 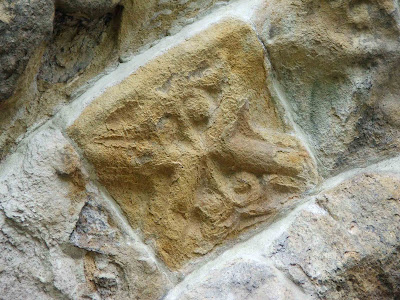 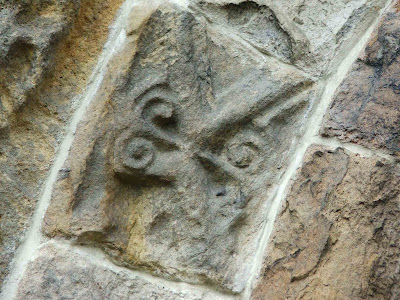 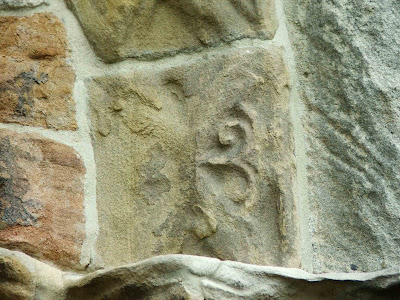 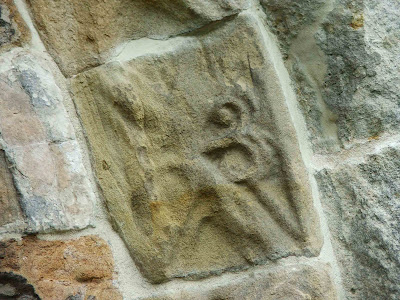 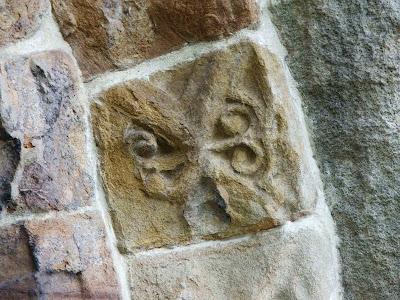 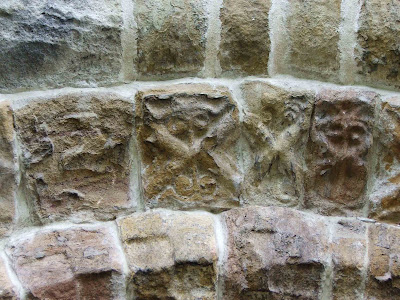 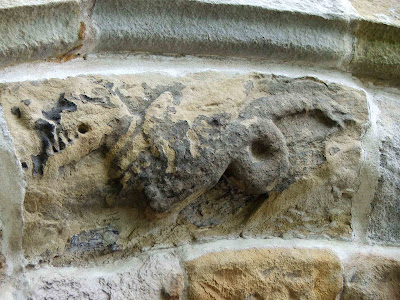 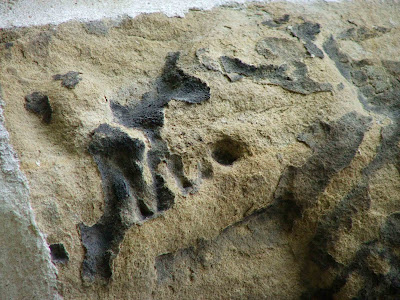 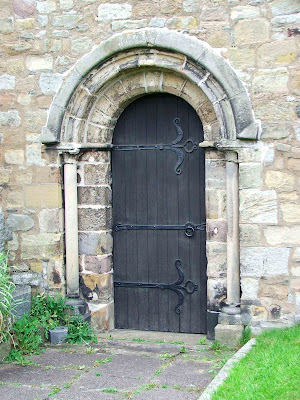 Above. The reset Priest's doorway in the South wall.
An additional door can be found in the South wall of the church. The Priests door is smaller than the Norman door in the tower, but is of the same period....around the 12th century. It's not in its original position, being seated in a mainly 14th century wall. 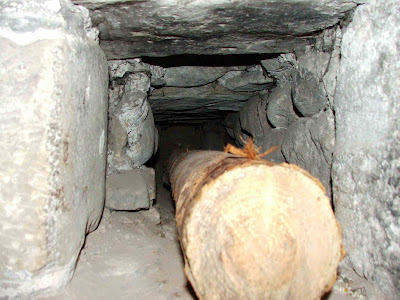 Above. The draw bar slot in the South door.
The Nave was restored in 1866, when an organ gallery that previously extended from the inner tower wall towards about the third of the Norman pillars. This renovation work opened the West side of the church up, exposing the Norman pillars fully. During this period of renovation and restoration, a charred wooden beam was found embedded into the wall. Charring was also noticed on a number of stones from this wall. This fire damage probably suggests that the church at Kirkby Lonsdale was accidentally damaged in a fire, although local legend states that the church was sacked by the Scottish army after their victory at Bannockburn in 1314. The Scots may have sacked many villages and their churches in the area as they raided huge areas of English territory in Craven, Lunesdale, including damaging and destroying property and churches in Clapham and Bentham, but there are scant records of these damaging incursions. The 14th century walling at the site of the main door in the South wall, contains a huge draw bar slot. 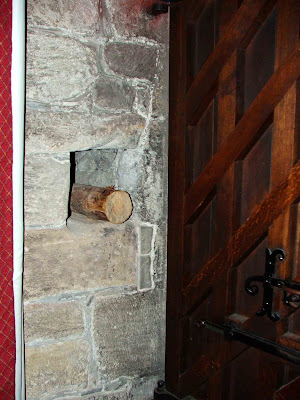 Above. Much shallower draw bar slot in the opposing door jamb.
It is perhaps a full 12 inches deep on the West side, and perhaps up to 3 feet deep on the East side. 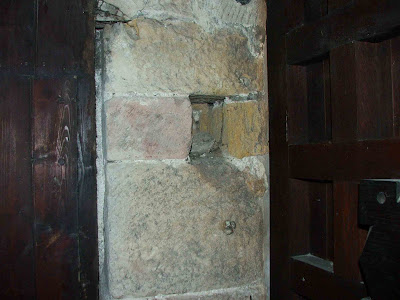 Above. Shallow draw bar slot in the doorway of the tower.
The date of the wall in which this feature can be found, coincides with the period that the borders, and indeed areas as far away from the borders such as Kirkby Lonsdale, were reputedly in danger from Scottish raids. Checking the interior of the tower, I also found draw bar slots on the inside of the re-set Norman doorway. 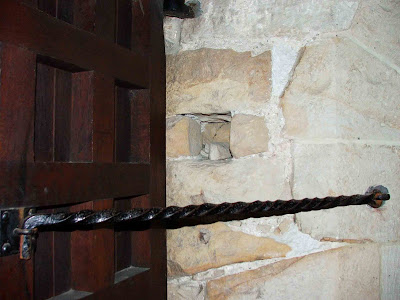 Above. The draw bar slot in the opposing door jamb.
The draw slots here weren't as deep as the those on the door inside the porch. This could perhaps indicate that the original door into the tower was much more substantial than the door at the porch.
Posted by The Cumbrian Castle listing. at 19:34