The village of Rampside is sandwiched between Barrow and Roe Island. The church itself is a bland affair, built of plain grey stone with plain tall arched windows.There are claims that the church is built on the site of an ancient barrow. Whether this is true or not is difficult to tell. Certainly the ground on which the church is built is raised above the surrounding countryside, although this may just be down to the building work involved in erecting it. 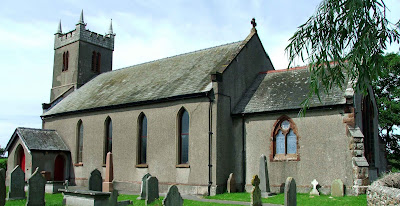 Above. A view of the church looking North West.
The church used to be a chapel of ease under Dalton, but now falls under the diocese of Carlisle.During the 1860’s the then sexton of the church, William Jackson found a stone axe-hammer probably of a Neolithic period, and a Viking sword, known as the Rampside Sword. A large slab was also discovered over the top of a skeleton, with a cross carved into its surface. The slab is now kept inside the church, and just my luck, it was locked when I visited.The present church was built in 1840, with a new porch and vestry being added in 1866. This building replaces an earlier church, possibly dating from 1621, although all that remains of the earlier church is a date-stone marked “1621”, built into the wall. 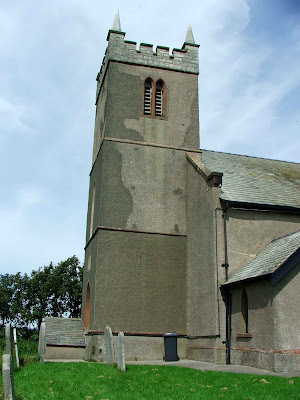 Above. A view of the Western tower.
The church fell into disrepair in the past, and the Sexton was required to “keep the church and pews cleanly swept and sufficiently dried” in 1879. A new chancel was built in 1892, the money required being raised by public subscription. Further work was done in 1920, and yet more in 1997 when the vestry, kitchen and toilets were built. 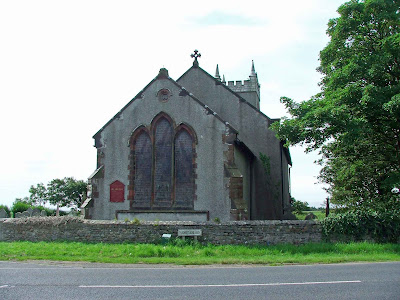 Above. A view of the East end of the church, showing the Huddleston window.
There is one stained glass window of note in the church, and that is the East window. This was created by Shingley and Hunt of Lancaster and London, and depicts the crucifixion. The window was presented to the church in memoriam to Thomas Huddleston, MP of Ulverston. As an interesting side note in my family history, a number of Wilsons and Browns were married at this church, so it has a particulary interest for me.
Posted by The Cumbrian Castle listing. at 22:12