Staveley can be found about 3 miles North West of Kendal, just off the A59. The only surviving remains of the chapel of St Margaret, consist of the tower and the attendant grave yard, and can be found where Kendal Road meets Main Street. 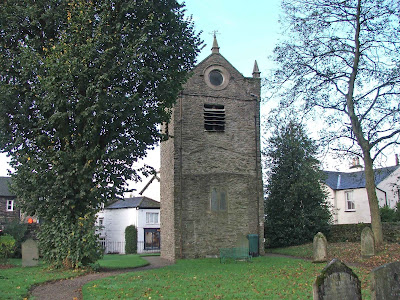 View of the tower from the rear, stood in the graveyard.

It's thought that the tower, which fronts onto the street, was built in the latter part of the 14th, or the early 15th century....but the church was definitely founded in 1388. The main body of the church was demolished in 1865, and on the above photo, both the original roof line and the interior door (originally opening onto the Chancel) can still be seen. As this photo shows, the chancel of the church must have been a very low building. 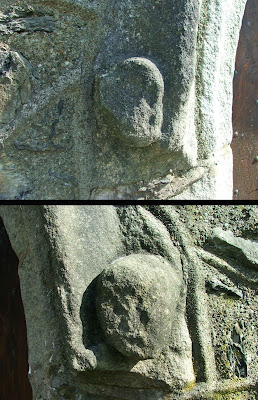 The above photo shows the weathered remains of two gargoyles that can be found on the West facing doorway. 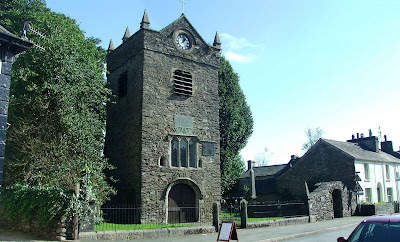 The photo above and below, show the front of the tower, with its three light window and the louvres above. The clock at the very top of the tower, was inserted to celebrate the Golden Jubilee of Queen Victoria, and was a gift to Staveley from W.B. Thornton. To enable the insertion of the clock, some repairs was carried out on the tower. Historical documents state that, in 1863, the church was already in a ruinous state, and had been abandoned. A new church was built, dedicated to St James, and situated on the Northern outskirts of Staveley.
Posted by The Cumbrian Castle listing. at 16:59