I absolutely hate Lakeland slate as a building material....so when I see a church built utilising this unforgiving material it does nothing to endear me to it. That said, I like the form this church takes....squat and sturdy, as if it's bracing itself against the Lakedistrict weather. 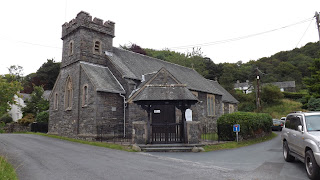 Satterthwaite had its own chapel of ease from the late 16th century, with the main parish church being in Hawkshead. The chapel was rebuilt in 1675 by Daniel Rawlinson, from London, from a family living at Grizedale Hall. 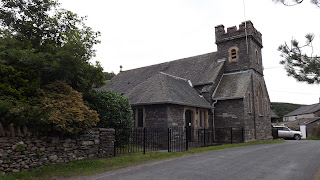 The first church was built in 1837 by Montague Ainslie, a local forester and businessman, and later Deputy Lieutenant of Lancashire (1852) It was built in the Early English style, with a narrow, square tower, single bell and gallery over the West end of the church.
All Saints became independent in 1881 and was later renovated at a cost of £450 in 1888. This work saw the roof and windows altered, and the gallery removed.
In 1914, the church was largely rebuilt, the works costing £1800, and involving the addition of the larger square tower we see today.
Posted by The Cumbrian Castle listing. at 04:46