St. Leonard’s church sits in a small woodland area in the hamlet of Chapel-le-Dale, about two miles outside of Ingleton, just off the B6255. 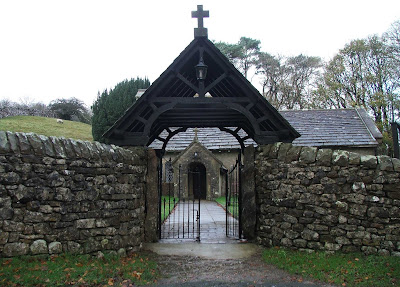 It is a grade II listed building, built in the late 17th century with some 18th century additions. According to English Heritage, it was vastly restored in 1869. There is some suggestion (largely by Peter F Ryder) that the church contains masonry from as early as the late 16th century....the evidence for this dating largely based on the blocked window that can be seen on the South wall. It is of a different type of window to all the others found in the church, consisting of two upright jambs...a simple late medieval window form. No other masonry in this small chapel appears to be of this period though. There is documentary evidence of a chapel in this area (possibly an earlier building on this site) from 1595, which mentions the "chapel of Wyersdaile". Peter Ryder also states that it is mentioned again in 1618, this time with the name "the chapel of Witfalls" 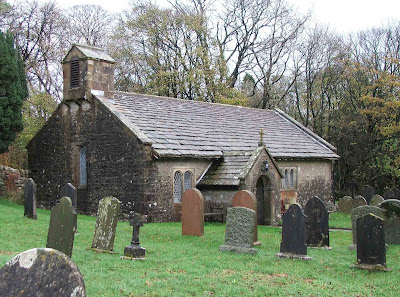 The church is built using local limestone, giving it its ‘local’ grey colour. There is a white marble memorial on the West wall of the Nave which reads: "TO THE MEMORY OF THOSE WHO THROUGH ACCIDENTS LOST THEIR LIVES, IN CONSTRUCTING THE RAILWAY WORKS, BETWEEN SETTLE, AND DENT HEAD. THIS TABLET WAS ERECTED AT THE JOINT EXPENSE, OF THEIR FELLOW WORKMEN AND THE MIDLAND RAILWAY COMPANY 1869 TO 1876" 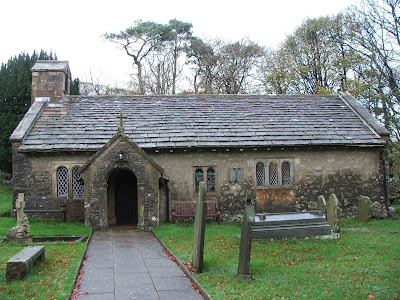 This is dedicated to the workers who perished during the building of the Settle to Carlisle railway, and also those who built the viaduct at Ribblehead. The church was renovated in 1743, when the south door seen today, was most likely constructed. The single bell has a date of 1793 inscribed on it, possibly pointing to the date the small bell-cote was added. The restoration mentioned at the beginning of this article, was undertaken by Ebenezer Smith. It was this period of refurbishment that presented the chapel in the form it takes today.
I'd recommend a visit to this beautiful chapel. I'm not sure if it's open daily for investigation, but there is ample parking nearby, and the scenery here is some of North Yorkshire's finest.
Posted by The Cumbrian Castle listing. at 22:39

Can anyone tell me the story of the grave of Tom and Isobella (Isabel) Kilburn who died on 11th January 1928 and are buried next to the church, with a lovely anchor as part of the headstone. How did they die on the same day ?