The church of St Michael can be found about a quarter of a mile to the South East of Brough Castle. Hidden away at the bottom of a hill, and surrounded by trees this is a very tranquil and sublime church. The back of the church is the most well kept part of this building, with the grave yard here mowed and tidy....whilst the front is overgrown...this is obviously where the older graves can be found and so is little visited. However...the 16th century porch (at the rear) should not be ignored, as it hides a beautiful 12th century arched doorway (see the photos later on in this post) 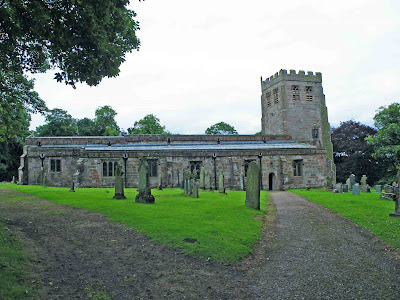 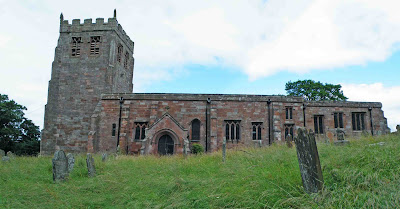 The tower dates from 1513, and incorporates a spiral stair case hidden in the North West corner. Looking at the photo above, the tiny single light window to the left of the porch, probably dates from the 12th century (although not the glass)

The photo above shows the lozenge decoration on the 12th century supports on the Norman arch in the Southern wall. The one of the left is uncovered (bare stone) whilst the one on the right looks as if it has suffered under a cover of white plaster. This has been removed in a few spots, damaging the stone beneath.

The porch contains a small treasure trove of graveslabs and other antiquities found in the church or the yard. The above photos shows what is thought to be a Roman grave stone, discovered in the church yard. The photo below shows some early medieval grave slabs, some discovered beneath the floor of the Church, and others outside in the grave yard. 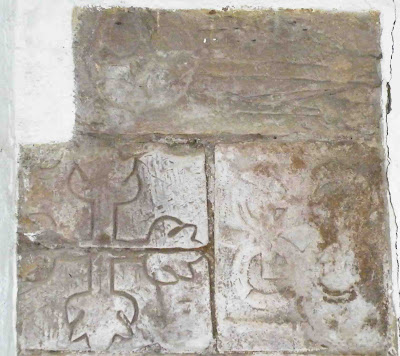 The photo below shows another medieval grave slab, with its familiar floral engraving. This one has been mounted above the window in the porch.

The South aisle, shown below, is very wide and separated from the North aisle by six 14th century pillars. The wall to the right of the photo is the thick, mostly 12th century wall with odd bits of 14th and 16th century stone work.

The photo below shows the beautiful Nave ceiling, probably dating from the 15th century. Local tradition has it that the original was burned by the Scots sometime before the 1500's....although these local legends often attribute unfortunate accidents to Scottish invasions and attacks!! 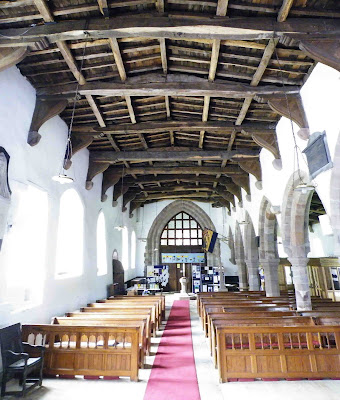 Another view of the 15th century ceilings, looking towards the West end of the church. 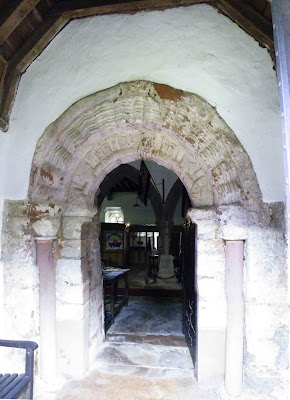 This photo shows the beautiful Norman doorway. If you click on the photo to get a full screen view, the faces and patterns carved into the stone are easy to make out. I would imagine that the white plaster\paint needs to be removed....it seems to mask the carvings a little. 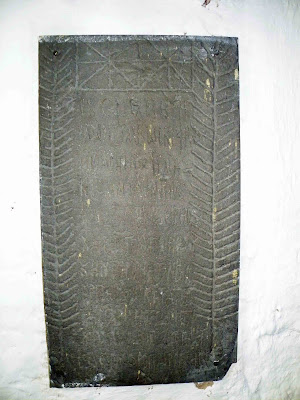 This is the Brough stone (a copy)....a Roman memorial stone with an inscription written in Greek, dedicating it to a Syrian called Hermes. It supposedly says that Hermes was 16 years old, and was a conscripted soldier, possibly based at the Roman fort at Brough. It was found in the church yard, with the original now being housed in the Fitzwilliam Museum at Cambridge. This copy can be found hanging on the wall inside the tower...which my not always be unlocked and accessible.

This is a beautiful church and seems to be open most days. Make sure that you walk right around the church yard to the back of the church where the porch is, as the Norman doorway is well worth inspection.

Posted by The Cumbrian Castle listing. at 18:39

An interesting 'collection' of churches. Each will have its own history 'soaked' into the walls and written in registers. New life and loves, suffering and death. Humanity at its most vulnerable. Old churches are so easily dismissed and yet they are part of our heritage.
Nearer home, Aldingham, with its plain glass windows facing the sea, solid pillars and enclosed pews, is also of considerable historical interest. Reputed to have had the body of St Cuthbert rested on the spot where the church is built - so long ago. Then Urswick Church with its unusual pulpit and long history. The simple simplicity of that gem of a church at Dendron. And all the rest - not a 'dud' among the local churches.
Thank you for putting these pictures here, of those churches further afield, for us to see .