The best distant view of this fairly well hidden church, can be had as you travel into Kirkby Stephen on the B road from Soulby, entering the town from the West. Here, the church tower can be seen peering over the houses and shops. What we can see today, is mostly the rebuilt church of 1847...a building mostly attributed to Robert Carpenter who was responsible for rebuilding the chancel and the North and South chapels, the clerestory and the external wall of the very long and narrow North aisle. 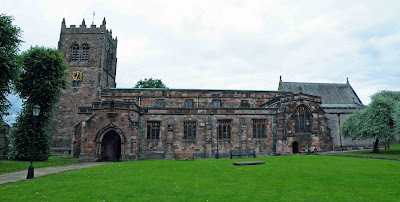 The oldest surviving stone work in the church, is a small portion of the West aisle, which now incorporates a piece of thick 12th century wall with a 14th century window inserted into it.

The photo above shows a view towards the tower at the West of the church. The pillars each side of the nave probably date from the 13th century.

The photo above, shows the East end of the church, with the fine 3 light window above the altar. To the left and right (out of sight here) are the North and South chapels. The wall to the right of the photo, the wide South aisle, dates from 15th century, whilst the wall to the left of the photo, the narrower North aisle, dates from the 1847 rebuild. 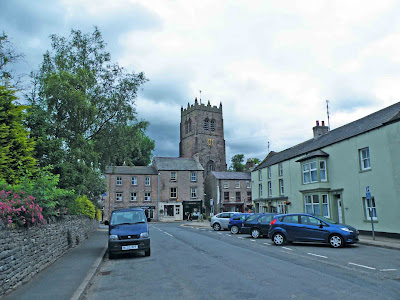 The tower, seen over the roofs of nearby houses and shops, dates from the 16th century. Unfortunately it appears to be kept locked, so it wasn't possible to inspect the interior. 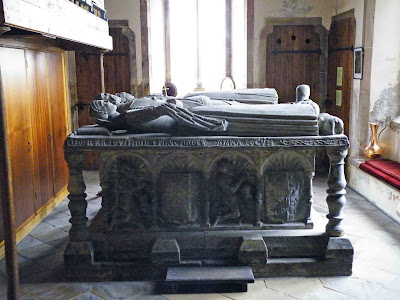 The photo above shows the huge tomb chest in the North chapel. It shows effigies of Thomas, 1st Lord Wharton and two of his wives. 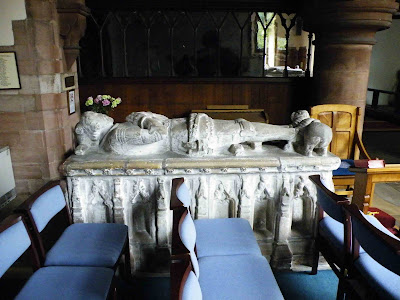 The photo above shows a tomb chest of one of a member of the Musgrave family...dating from the 15th century. This tomb chest can be found in the South chapel at the East end of the church. 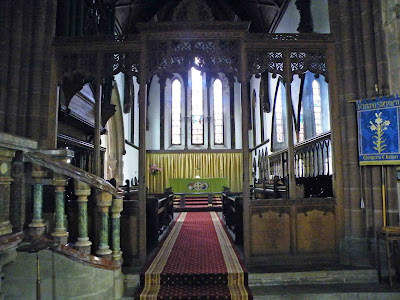 This view shows the East end of the church, with the 16th and 17th century carved screen between the nave and the chancel. The church appears to be kept unlocked, so inspection of the interior is possible.
Posted by The Cumbrian Castle listing. at 17:56