This unusual church sits at the junction of Church Street and Town Head Way, in Settle, North Yorkshire. It is unusual in that it is dedicated to a Holy mystery rather than a saint or other religious figure...the Holy Ascension. The church does not sit on the usual West-East alignment, but instead sits along a North-South alignment, which apparently means that the South window gets the morning sunlight. The South window details the church's dedication to the Holy Ascension, with images of Matthew, Mark, Luke and John. 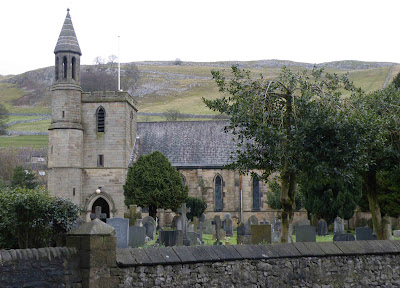 The church was built between 1836 and 1838, to designs by Thomas Rickman, in the Early English style. The square tower possesses a round, capped stair turret which looks oddly out of place. The tower contains a peel of eight bells, that were re-hung in 1996, and re-tuned in 2005. There was once a water powered organ in the church, which used a stream that runs underneath the chancel to power it. 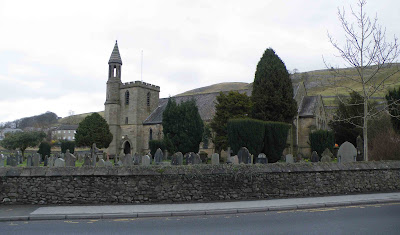 The church contains a monument to workers killed during the construction of the Settle to Carlisle railway line between 1869 and 1876. There is also a grave stone in the church yard, in Welsh and dedicated to John Owen from Anglesey, who also died whilst working on the railway line.
I obviously need to pay a visit to this church, as there are many interesting features inside that I was unable to photograph on my very fleeting visit.

Much of the information here, was gleened from the Settle Church web site.
Posted by The Cumbrian Castle listing. at 19:11