Situated in the park (Museum Gardens), sandwiched between Marygate, Bootham and accessible from Museum Street, the standing ruins of the Abbey of St Mary are a direct opposite of the grandeur and completeness of York Minster.

Above. The North wall of the church.
The Benedictine Abbey was established in 1055 and dedicated to Saint Olave, but was re-founded in 1088 by William II, who was reputed to have laid the foundation stone of the new Norman building. The original church, deemed too small for its growing congregation by William, although no longer standing, can still be seen as a curve of stones in the turf...representing the apse of the church. 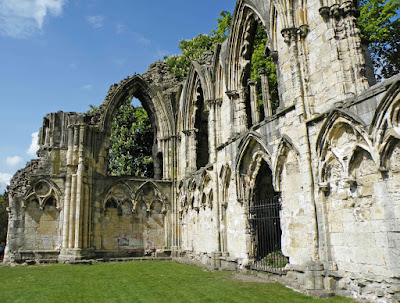 Above. The North wall of the church, and part of the cross wall.
It was from the monks at St Mary, that Fountains Abbey was established. A group left after disagreeing with the rigid Benedictine way of life in 1132, and travelled North to establish what was to become the largest and richest Cistercian abbey in England. 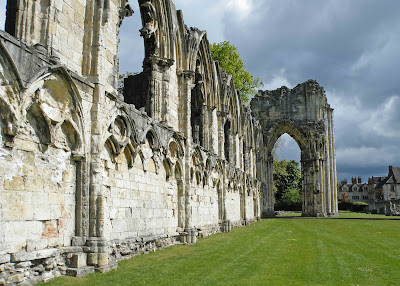 Above. The North wall of the church, looking East.
The abbey ruins, as seen today, represent a period of building that took place between 1271 and 1294, resulting in one of the largest and richest Benedictine Abbeys in the North of England.....as well as one of the largest land owners in England. 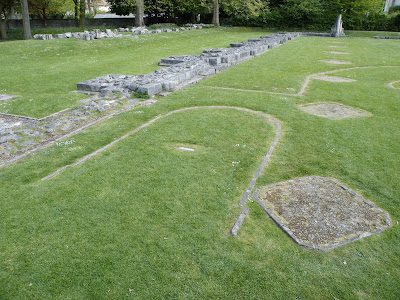 Above. The footings of the apse from the original Norman church.
As with all of England's monastic houses, the 1539 Dissolution of the Monasteries saw the abbey closed down and its lands and wealth confiscated by the Crown. All that remains today, are the North and West walls and a few other pieces of masonry and excavated foundations of out-buildings. The West gate also remains, standing between the church of St Olave and the gatekeepers lodge.

Above. The East end of the abbey precincts, showing rubble ruins and foundations.
Much of the abbey precinct walls and towers were also left standing, most likely because they formed an integral part of the defensive walls of the city of York.
Posted by The Cumbrian Castle listing. at 22:41