St Olaves nestles safely behind the walls of St Mary's Abbey just North of the River Ouse. The walls here are about fifteen feet high, and St Olaves can be seen towering above the parapet along Marygate running to the church's West. 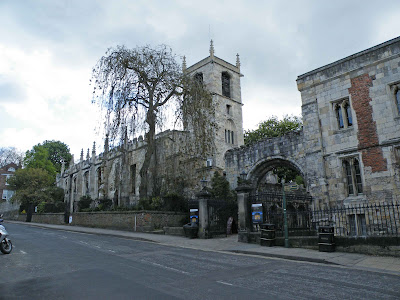 Above. St Olave from Marygate to the NorthWest.
St Olave is a pale, almost ghostly looking building, dating from around 1055, and dedicated to the patron saint of Norway. Olave was a Christian convert, switching faith whilst fighting in England. He was King of Norway for thirteen years (1016 to 1029) Although during his reign he was regarded as a tyrannical king, when Norway was invaded and occupied his fellow countrymen began to see him as the embodiment of Norway, and so he became a national hero. 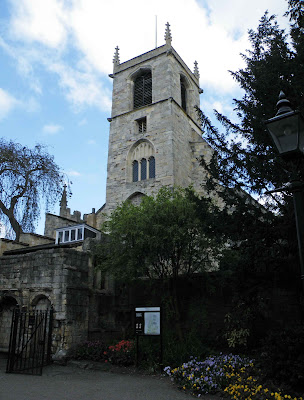 Above. St Olave's tower from within the gatehouse courtyard.
It is mentioned in historical documents, that Earl Siward died in 1055, and was buried in a church which he had built, called Galmanho....an area outside the city walls somewhere near the site of today's Marygate area. It is likely that this represented the original church here on Marygate. Sometime after 1066, Earl Alan from Brittany, gave the church and its lands to Stephen of Whitby as the site upon which he was to build an abbey. Some twenty three years later, the site was a cramped collection of buildings, and there was no more room for expansion. William I gave them land adjoining the grounds of St Olave's, and the Abbey of St Mary was built. 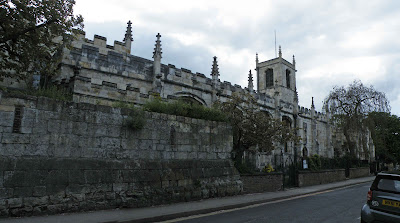 Above. St Olave from Marygate with a section of the abbey precinct wall in the foreground.
In 1466, work started on expanding the church, and the smaller 11th century building gradually began to be swallowed up by a larger church....a building that is largely what we see it today. The church suffered badly during the civil war, and was at one point even used as a gun platform during the siege of York. It seems that the building suffered during this period, and it wasn't until the early 18th century that repairs were carried out. Rebuilding was done using much stone from the abbey next door. 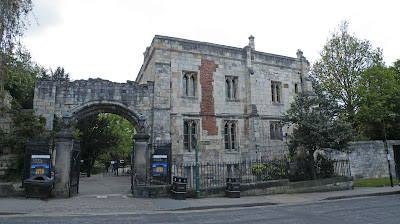 Above. The gatehouse and lodge facing onto Marygate.
The gatehouse to the grounds of St Mary's Abbey, was originally built in the 12th century, but only the side walls now survive (those parts that lay behind the archway) The arch you pass beneath was built in 1470, as were the walls to the left of the arch in the photo above. The building to the right of the gate is St Mary's Lodge.
St Olave's web site.
Posted by The Cumbrian Castle listing. at 22:12