One of my favourite churches, St James is a great site with Norman and medieval architecture, viking burials and the curious tower...possibly a fortified building erected upon an early medieval ring work...and built next to a late medieval pele tower. The church and the church yard are littered with grave slabs and other snippets of archaeological interest.

The cross shaft, shown below, lays about five metres South of the tower, and is quite badly damaged at the top. The base into which it is mounted seems at odd with the smooth finish of the shaft...I wonder if they were not originally together. 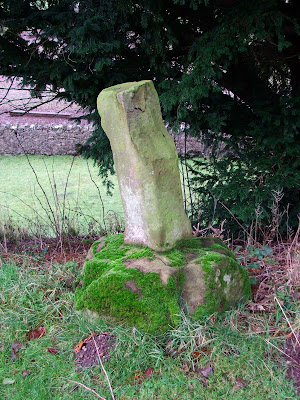 I'm not sure what the photo below shows. This small remnant is situated high up on the tower's wall...I think it could be a very small two light window, either blocked, or else moved from its original position and remounted here. 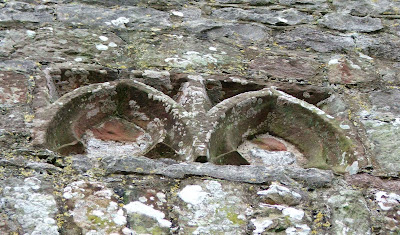 This brightly coloured orange artifact is mounted in the wall of the South porch. There is a line of very faint lozenge patterns carved into the areas above and below the hole, with two shafts either side. It is thought that it could date from the 12th century (or possibly earlier) and that it may be part of a stoup, a small stone basin for keeping holy water in. 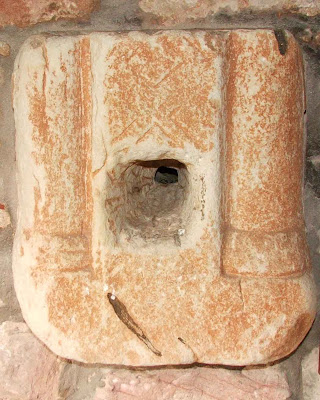 The following photo shows an undated grave slab, which lays about eight metres South of the chancel outside in the church yard. There doesn't appear to be any patter carved into this stone, other than the letter F. 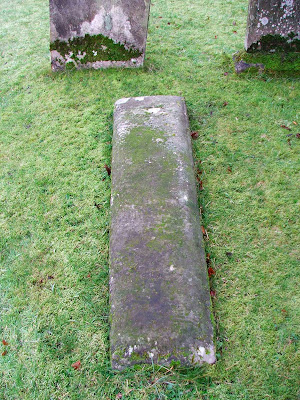 The following photo shows the head of what may have been a free standing cross, or a headstone...now mounted in the external wall of the East wall of the vestry. Possibly dating from sometime in the 12th century, it retains most of its left and right arms, a damaged upper arm, and has 6 small holes carved faintly into its face. To the right of this remnant, there is also a red sandstone stone mounted into the wall...this time with zig zag patterns carved into its face. I've not been able to date this item as yet. 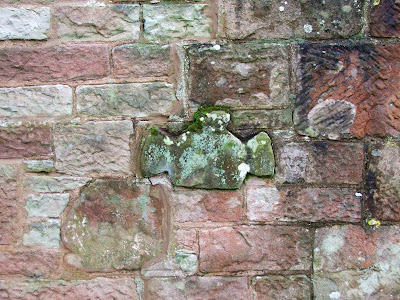 This grave slab (below) is mounted into the external face of the North wall of the vestry. It measures just over one metre long, and has an incised fleur-de-lys pattern instead of a cross. You can just about make out the sword carved next to it on the left. It is thought this grave slab may date from the 15th century...other slabs similar to this, and dating from the 15th century, have this design carved into their face...the fleur-de-lys is thought to have represented the Virgin Mary. 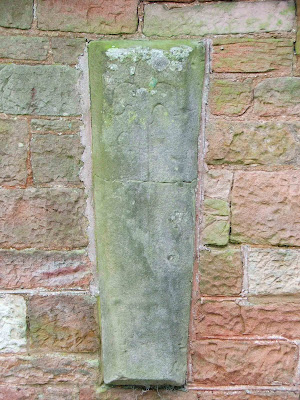 This undated pink sandstone slab is now mounted in the internal face of the West wall of the porch. It shows a straight armed cross with a very rough fleur-de-lys. Apparently this stone is very similar to some found at Appleby and Morland churches. 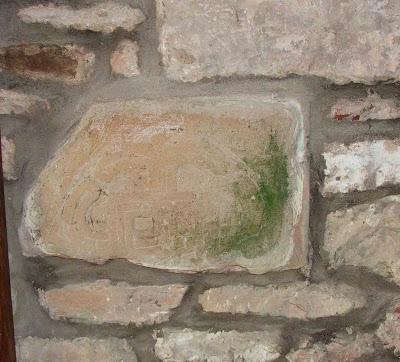 This large grave slab lays in the recess of the blocked South door, outside in the church yard. It has a simple cross formed by four sunk panels. 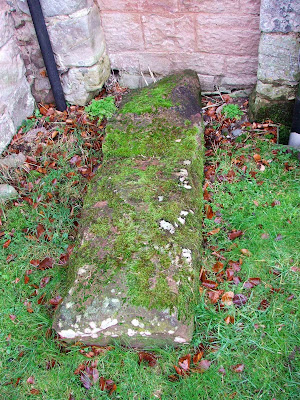 Posted by The Cumbrian Castle listing. at 21:36