Warton lays about a mile North of Carnforth, with the church of St Oswald laying on the South of the main part of the village, directly across the road from Warton Rectory

The church has strong associations with the Wessingham family, famously becoming the Washington family, with some ancestors of George Washington, first President of the United States of America coming from this area. 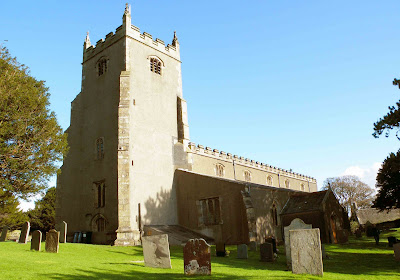 The Grade II listed church looks a dirty grey colour due to the roughcast rendering, and at first doesn't look an interesting church by any stretch of the imagination. I would however urge a visit. Inside, the church has a spacious atmosphere, with high ceilings and wide aisles....and the white-washed walls mean that the church is brightly lit during daylight hours. The oldest part of the church, is the South Eastern chapel, probably dating from the 14th century. The chancel, North Western chapel and North aisle date from the 16th century. The tower and the South porch are both from the late 14th or early 15th century, whilst the South aisle, to the West of the chapel, may also date from the 14th century.

The photo above shows a view looking towards the East end of the church. The entrance to the church is via the steps on the left of the photo. The pillars to the right of the photo are relatively modern, with those to the left date from the 16th century, hence the dramatic difference. 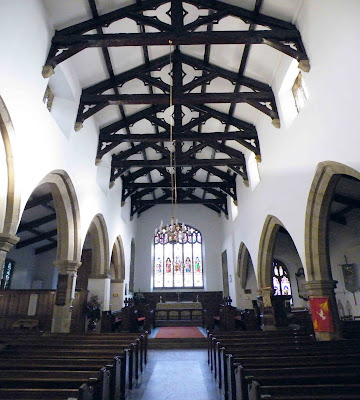 The photo above shows another view towards the East of the church. The ceiling timbers are spectacular, and are described as having "softwood king posts and cusped decoration" although I've not been able to find a date for its construction. 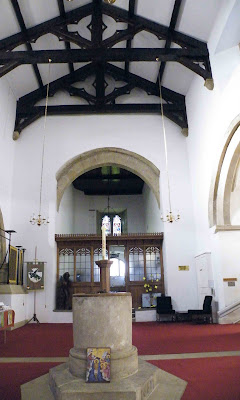 The font may be Norman, whilst it is mounted on a plinth dating from 1661. This plinth was donated to the church by Sir George Middleton of Leighton Hall, and Sir Robert Bindloss of Borwick Hall, some four and a half miles to the North East. 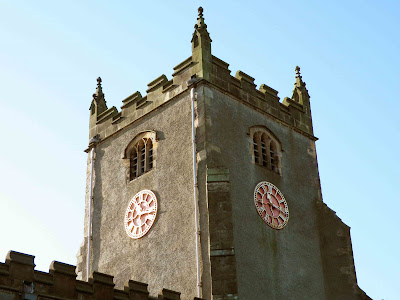 The family trees of George Washington and Winston Churchill are detailed at great length within the church, with the coats of arms of the Washington family on display inside. This item was originally mounted on the external wall of the tower, but was moved inside in 1955. 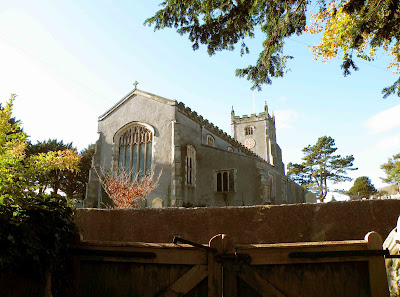 The church appears to be left open, no doubt to satisfy the many visiting Americans, but parking is a problem.
Posted by The Cumbrian Castle listing. at 18:31