When Peter Ryder was doing his field research for his book The Medieval Cross Slab Grave Covers in Cumbria, he must have had a nightmare visit to Kirkoswald. The large collection of grave slabs kept outside the church are badly in need of some loving care and attention. All are covered in lichens and moss, making their carvings incredibly difficult to see. The grave slabs are all situated to the left of the North porch....which incidentally still contains some original timbers. 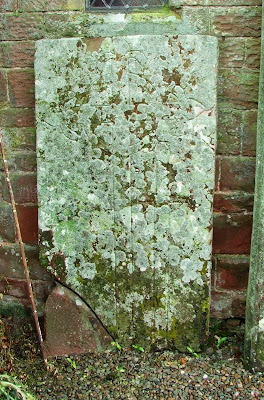 The first slab, shown above, is probably late 14th or early 15th century and has had its base broken off. The design carved into the sandstone, shows a simple cross with a ring around the centre of the head. The terminals are crude fleur-de-lys. To the right of the cross a simple carving of a sword can be seen.

The next slab, shown above, probably dates from the 1200's. The cross carved here is very ornate, with decorated fleur-de-lys within a circle. On the left of the cross's shaft, there is a small square carving, which Peter Ryder indicates is a 'clasped book'. A sword is carved to the right of the cross, with its tip meeting the tongue of a small dragon which is looking up. The lichen is so thick at the base of this slab that the dragon is not really visible. The dragons tail passes under the foot of the cross, and rises again to the left of the cross base. 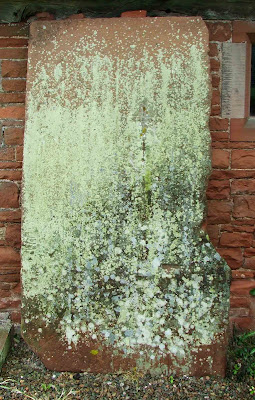 This double grave slab, shown above is very weather worn, and again thickly covered in lichen . There is an incised line dividing the slab in two, with an identical cross on each side. Both crosses are simple four armed crosses with slim shafts with a small disk shape just beneath the head. Both finish on a stepped base. The cross on the left has a small pair of closed shears to its left, whilst the cross on the right has a small shield to its left, and a plain sword to its right. There are the remains of some inscriptions beneath the bases of both crosses, as well as to the left of the left hand cross and to the right of the right hand cross. 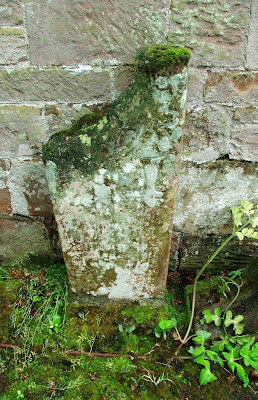 The very broken slab shown above, is probably late medieval. There is a huge piece missing from the top left hand side. What is left has an incised cross with a ring with fleur-de-lys at the terminals. The cross stands on a stepped base, with a short sword to its right. 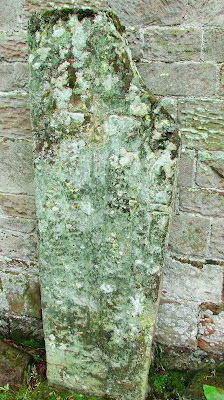 Another very badly damaged slab, this one, shown above, possibly dates from the 1400's, though it contains a badly weathered inscription with a date probably in the later part of the 15th century. This slab has a simple cross incised on its face, with fleur-de-lys at the terminals of each arm. The cross is mounted on a stepped base, and has a sword carved to its right. There are lines of writing to the left and the right of the cross, so worn now as to be almost unreadable. A 19th century newspaper article stated that the date 1466 could be made out on this stone, as well as the name John Lothaine. 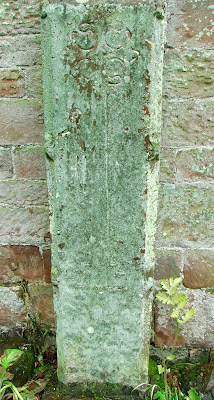 The slab shown above, probably dates from the late 13th century. It is in extremely good condition, with the carvings showing very well through the covering of lichen. This is probably due to the fact that it was, until 1906 kept inside the church, only being removed when the boiler chamber was being dug beneath the church. It was found with the remnants of an oak coffin and a pewter chalice dating from the 14th century. The cross carved into the face of this slab is of a bracelet type with trefoiled buds at the terminals of each arm. The cross is mounted on a stepped base, and has a small pair of shears carved to its right. 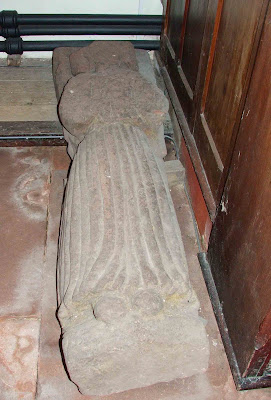 The photo above shows a member of the clergy, in flowing robes and with arms clasped across its chest.
Posted by The Cumbrian Castle listing. at 21:24