St Michael's at Brough contains a couple of really good examples of grave slabs in the porch, and of course, the Brough Stone. 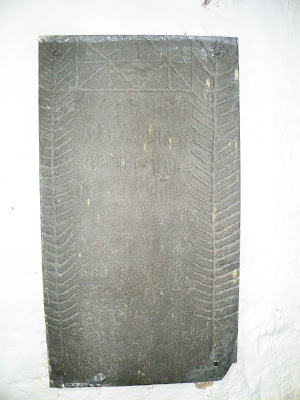 This grave slab is mounted over the window in the porch, and has had its base removed of broken off. It most likely dates from the late 12th century, and shows a cross head made of four unbroken circles with pointed buds and carved in relief within a sunken circle. A pair of shears is shown at the bottom of the slab, unusually with the blades closed.

The stone mounted on the opposite side of the porch to the grave slab shown above, is altogether more interesting. It consists of an almost complete grave slab, the heads off two more slabs, and an inscribed Roman slab.
The slab at the top of this collection, is very small, only about 63cm long....and once again probably has had its base removed or broken. The cross has slightly lozenge shaped arms and is carved in relief. There are a pair of open shears to the bottom of the slab. This one probably dates to sometime during the 12th century. 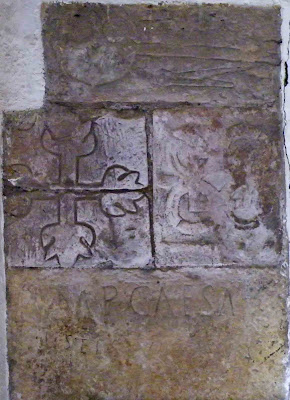 The grave slab to the left of this photo, probably dates from the 12th century. It has a straight armed cross with five lobed terminals. The grave slab to the right of this photo, has a bracelet cross with a box enclosing its head centre. The whole is carved in relief inside a depressed square panel. This one possibly dates to the late 12th century.
The final part of this small collection, is a Roman slab. It probably originated, along with the Brough Stone, from the Roman fort beneath Brough Castle. Very badly weathered, the inscription is very difficult to make out.
Posted by The Cumbrian Castle listing. at 21:12