A beautiful church, St Lawrence posses the only Saxon (or Saxon Norman) tower in the whole of Cumbria. It also posses a good collection of grave slabs and other artifacts.

The photo below shows a sundial, minus its brass dial, mounted on a stepped plinth. It lays around fifteen metres South West of the tower, and probably dates to the 18th century only. 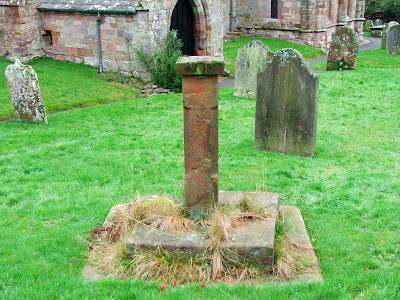 The collection of stones shown below are mounted into a blocked recess, and were probably place here during the restoration of 1896. The most notable stone is at the bottom of this stone collage. It is probably a fragment of the head of a slab with an incised cross and the start of an inscription. Also to be seen here, there are two larger stones, one of which is probably a corbel, and one of which has a finial cross. 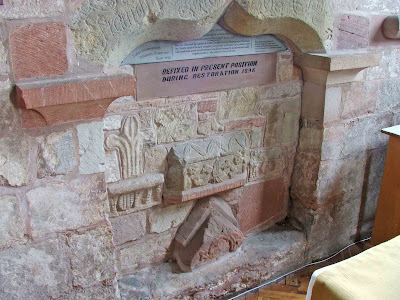 This grave slab, now standing upright against the internal face of the East wall of the South transept, bears a carved foliage cross in relief. It most likely dates from the 13th century, and its size, around one metre 2o centimetres, is apparently unusual!!

The photo below, shows part of the base of a slab set in the East wall of the South porch. It shows the relief carving, the stepped base of a cross with a trefoiled arch underneath. This could date from the late 13th century. 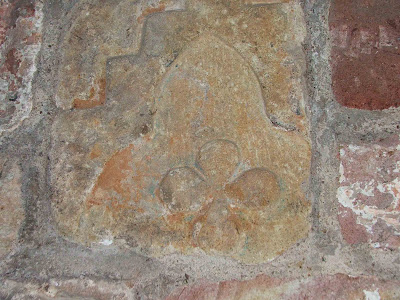 This photo shows two stones mounted one above the other. The sandstone contains a simple chevron pattern. 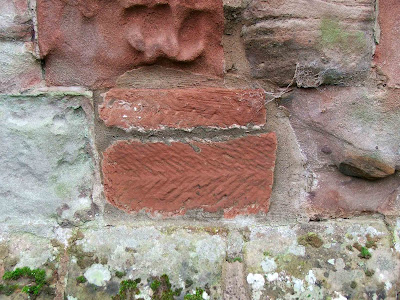 Posted by The Cumbrian Castle listing. at 21:32