The village of Kirkoswald lays about ten miles North of Penrith, and possesses a castle, a huge moated enclosure below the church and the remains of a fortified pele tower built into a building known today as Kirkoswald College. The church sits on the Southern tip of the village, literally two hundred yards to the West of the castle and overlooks the worn remains of a huge moated enclosure. This enclosure was probably the pre-cursor to the castle, and consists of at least four ditches separated by wide banks, culminating in an enclosure at the summit of the mound it sits on. 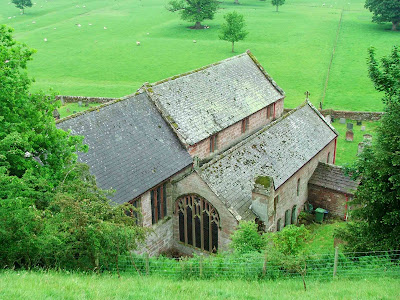 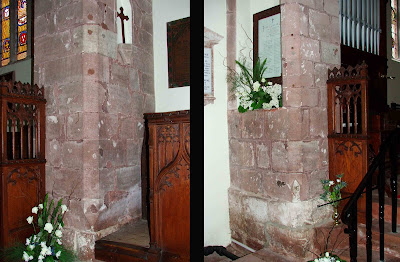 The grade II listed church is predominantly a 13th century structure. The walls of the South aisle and the West walls of the nave all date from this time, whilst the chancel is of the 16th century. The North aisle dates from much later but has a 16th century window set in the North wall.

The fact that the dedication of this church is to St Oswald, probably indicates a Saxon church stood here. The first mention of the church however, is in records dating back to 1246. In 1523, the church was made into a college for twelve secular priests under a provost, much the same as St Andrews of Greystoke. The Reformation in 1547\48 saw the end of the college after only 25 years in operation. 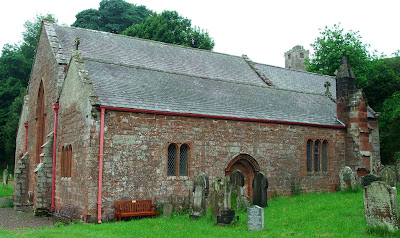 View of the South wall of the church, dating from the 13th century

Two early medieval corbels
The church possesses a unique detached bell tower that sits high up on the hill side, affording excellent views across the village and the surrounding countryside. The grade II listed structure measures around 15 feet by 15 feet, and stands to about 20 feet tall. A stair turret emerges on the roof, upon which a flag pole and weather vane are mounted. The tower dates from 1893, when it was rebuilt using the core of an earlier tower dating from 1743. It’s thought that there has been a tower here for some considerable time, predating this tower, and used as an early warning for the locals in times of ‘trouble’!! The tower contains three bells, dating from 1619, 1729 and 1892. 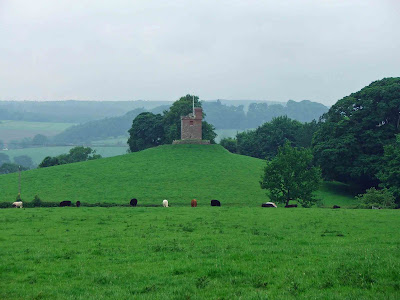 View of the bell tower from Kirkoswald Castle
The photo below shows a medieval sand stone effigy that can be found in the South aisle. 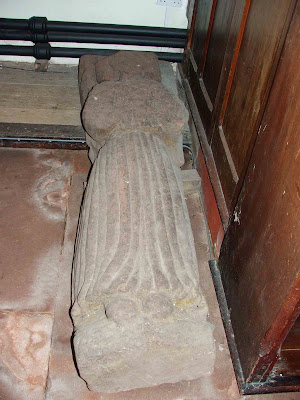 A single piece of an old wheel cross stands on a window sill, probably dating from the 9th or 10th centuries. 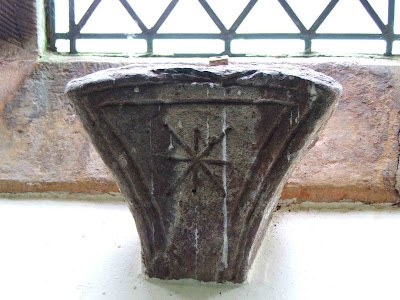 The photo below shows the bell tower. 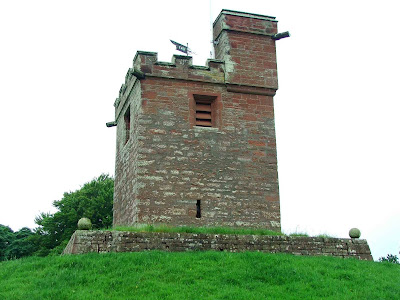 St Oswald’s well, shown below, found at the foot of the West wall of the nave, probably indicates the original reason for the siting of the church so far out of the village. 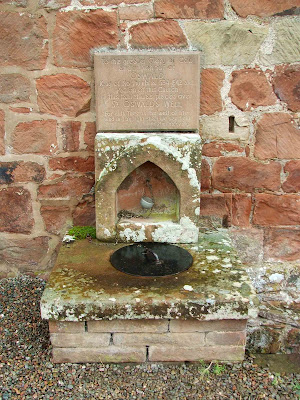 The porch, which has been rebuilt in recent times, still contains the timber beams from the original 15th century porch. 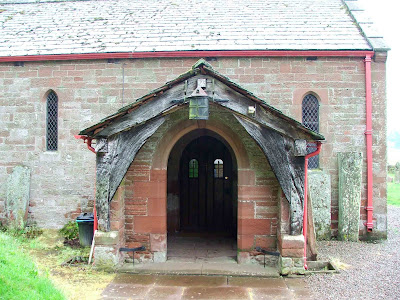 There is an impressive collection of medieval grave slabs leaning against the wall of the North aisle and near the porch, dating from the 11th century (Saxon) right through to the 14th century. These will be included in another post that will soon be made to the blog, detailing the many grave slabs found in churches throughout the region. The church appears to be left open for inspection, and is well worth a visit. Don't forget the castle to the West and the moated enclosure (best seen from the bell tower) All well worth a look.
Posted by The Cumbrian Castle listing. at 17:53