The Minster in York dominates the Northern section of what was once the Roman city of Eburacum. The cruciform building (in the shape of a cross) has foundations that date back to the Roman occupation of Britain....indeed the under croft demonstrates these remains in displays of Roman foundations and wall paintings open to visitors. Otherwise, the church has Christian foundations from the 300's, although the first building was erected on this site in 627 for the baptism of the King of Northumbria at the time, Edwin. In 637, the largely wooden structure was replaced with a stone building by Oswald, with a dedication to St Peter. By 670, Oswald's church was in serious disrepair, until St Wilfrid obtained control over the see of York. St Wilfrid put into place a project of building and repair, that soon saw the church and the attached school as one of the largest and most important in Europe. 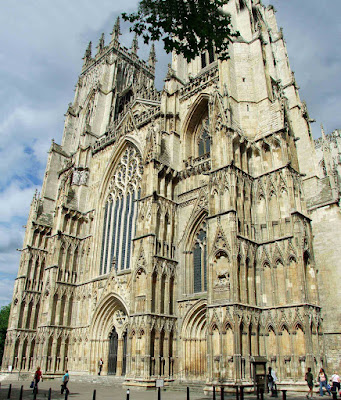 In 741 the church was totally destroyed by fire, but the rebuilt structure was all the more impressive, boasting a massive 30 altars. The church and the surrounding area were then subjected to invading Viking armies and Saxon kings and the chaotic political scene that manifested itself in the North of England as a result of the disunity engulfing the country at the time. It isn't until the 10th century that the history of the building emerges from the dust of this war-filled time, with a number of Benedictine Archbishops leading the church and its city onto bigger and better things. 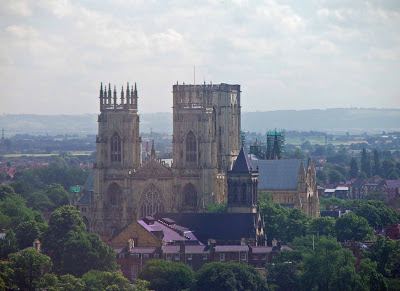 In 1069, after the Norman invasion (1066) the church was again badly damaged, but a year later, the first Norman bishop arrived, and made the required repairs. In 1075, the Danes destroyed the church, and again it was rebuilt, with the building work commencing in 1080. This time, the church was built with Norman architectural influences, measuring 365 feet in length, and, so historical documents tell us, rendered in red and white. A fire seriously damaged this new building in 1137, the damage done was soon put to rights. The cathedral was eventually declared complete in 1472, and consecrated the same year. 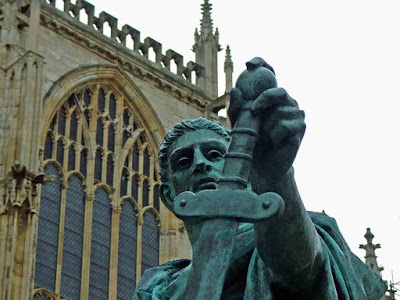 Statue of the Roman Emperor Constantine outside the Minster.

Then, through the 1200's, and right into the 1550's, the church, or cathedral as it had become, was added to, redesigned and improved. The huge central tower was built with a wooden spire (I feel a fire coming on!!) 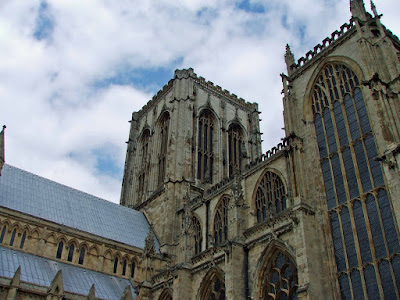 During the English Reformation, the crown sought to remove any signs of Roman Catholicism from church, with the removal and destruction of many tombs, the destruction of many of the original windows and some of the altars. During the Civil war, York was besieged by the Parliamentarian troops of Oliver Cromwell, eventually falling to his forces in 1644. Thomas Fairfax prevented the cathedral from being looted and indeed damaged. An interesting note here, is that Thomas Fairfax was the Parliamentarian that took Beetham Hall from the Cliffords in the same year as the siege of York, 1644. 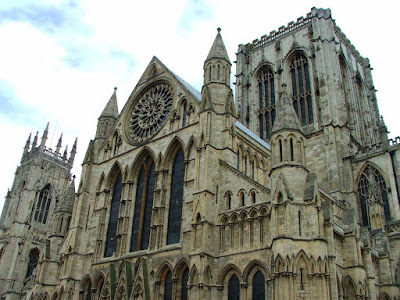 From the early 1700's, right through to the 20th century, the cathedral has undergone several phases of restoration and consolidation, with recent work concentrating on the strengthening of the central tower and the foundations.

Situated a few yards off Goodramgate, the medieval church of Holy Trinity is all but hidden from the many shopping streets that surround it. First mentioned in 1082, the church is reported to have belonged to Durham Cathedral Priory. Soon after this time, the church, in whatever form it took at this early time, was passed to the control of the Archbishop of York, Walter de Gray. In 1236, the rector of the church was Gilbert Capel. He would most likely have taken charge of a small one room\single celled building. It wasn't until the 13th century, that building commenced on a 'proper' church. Portions of the earlier 12th century and the main 13th century buildings still remain buried deep in the fabric of the present church. Of the 12th century building, the window over the altar in the East of the church survives. Of the 13th century building, perhaps only a single pillar on the outer wall of the South of the church survives. The tower is from various stages of the 15th century, and the rest of the building dates from repairs carried out in 1823, and further repairs and restoration during the 19th century. 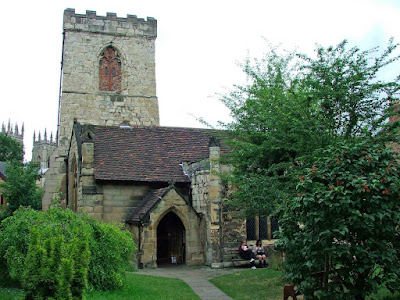 The interior of the church is furnished with 17th and 18th century box pews...much to my wife's delight...she was put in the 'naughty girl's pew' by our guide, and ridiculed by us all!! 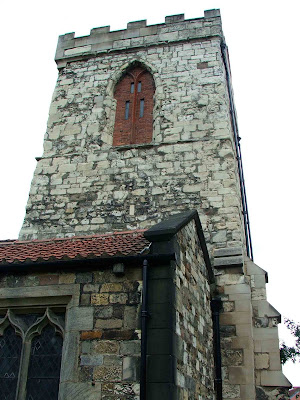 Today the church is redundant, with only one or two services a year. It's well worth a visit, with the grave yard surrounding the church quiet and far-removed from the busy shopping streets a few feet away. The interior is cool and quiet again, and well worth visiting. We visited this church as one of the York history tours, which gives a good insight into the history of the building and its surroundings.

Check the link out! The web site hosts a great history tour of the church, as well as news and events taking place at Holy Trinity.

The church of St Michael le Belfry is sandwiched between Petergate and Minster Yard, and probably named for the belfry of York Minster only a few hundred yards away. Built between 1525 and 1537, the church was probably built on the site of an earlier church, possibly dating from the Norman invasion of 1066. 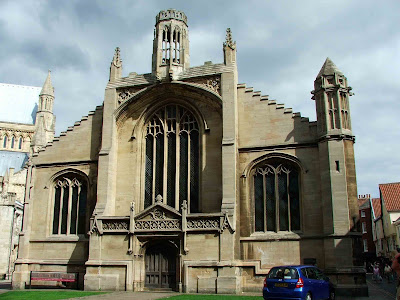 The church's main claim to fame, is that it holds the baptismal records of one Guido Fawkes....Guy Fawkes of the Gun Powder Plot fame....christened here in 1570.
Posted by The Cumbrian Castle listing. at 15:53