As Holy Trinity is my local Parish church (so to speak) I think it's only fair that it receives the odd return visit. I've decided to categorise certain aspects of the church, as it's full of important and interesting memorials, carvings, furniture and other items, that all point to Kendal's rich past and the people that have populated that past.
First off, I thought that I'd look at the gravestones that remain at Holy Trinity. The majority...in fact most of them have now been removed from their original laying places. The following set of post cards clearly show that the view of the church we see today, is not the same as would have been seen in years past. 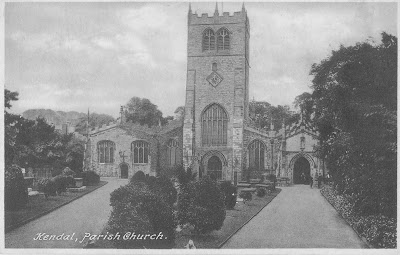 The above undated card (from a personal collection) clearly shows two paths running through the church yard (as today) but there are a few table tombs still in situ either side of the path. 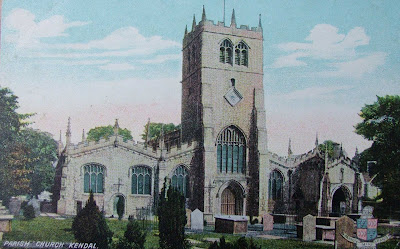 The above undated card (from a personal collection) also shows a large number of tomb stones still standing in the church yard to the West of the tower. 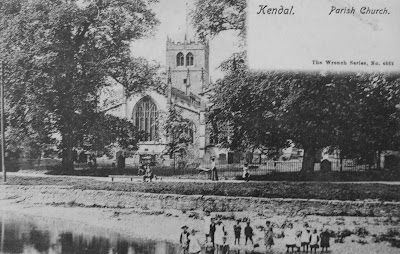 The above undated card (from a personal collection) shows a view of the church from across the River Kent, looking West. Behind the railings quite a few tomb stones, both headstones and table tombs, can still be seen. This view today is very different....with only three standing tomb stones remaining (see below) 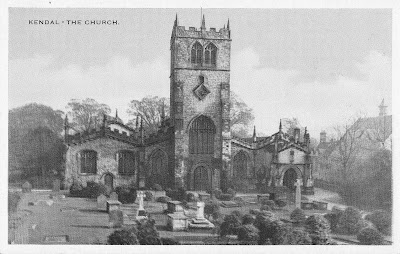 Another undated card (from a personal collection) also shows a large number of tomb stones in the churchyard. This must be an earlier view than the first card shown here, as there is only the one path leading to the West face of the church.
These days, as shown below, all the tomb stones from the West side of the church, have been removed from their original places, and set into an area to the North of the church. Here they have been laid out in a mosaic. The majority of them are badly damaged, worn by the weather and no doubt by people walking on them. There is a complete list of memorials that have survived outside the church at this link Memorials at Kendal Parish church.

Some of them tomb stones have been re-used to top off the walls that separate the South side of the church from the nearby car park. Their carved memorials no longer make any sense as they have been cut down to fit the tops of the wall. 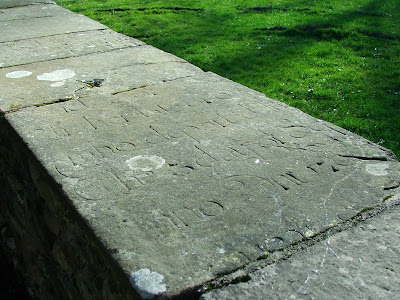 To the East of the church, only three tomb stones survive. The first one, shown below, is dedicated to Robert Hind of Kendal. Robert was a Freemason, as shown by the open bible with the square and compass resting in its pages. Apparently the tomb stone was erected in his memory by 'the Brethren'. 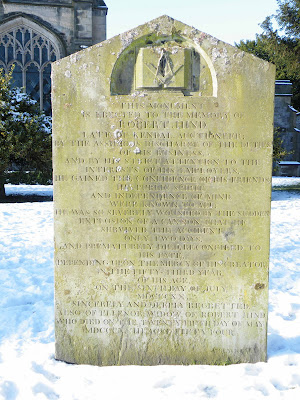 The second stone, is dedicated to various members of the Bolton family. Hellen, her husband Samuel, Mary their daughter and Thomas their son. 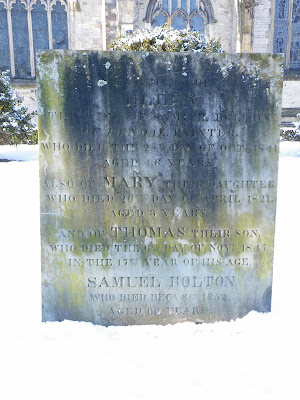 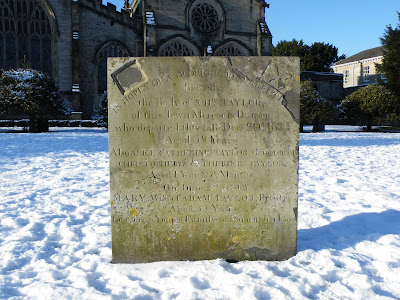 The dozens of gravestones to the North of the church are well worth exploring. Many are still readable, whilst others are damaged and too worn to see the inscriptions. There are also a huge number of memorials and plaques within the church, some of which will be included here later.
Posted by The Cumbrian Castle listing. at 16:26