Chester’s grand cathedral lays almost at the heart of the old city, surrounded by Abbey Street, Frodsham Street, Eastgate Street and Northgate Street. It is visible across the rooftops from huge areas of the city, and offers a good few hours of exploration. The cathedral’s history can be traced back nearly two thousand years!!! Local legends tell of a Druid temple on the site, probably destroyed by the Romans and replaced with a temple dedicated to Apollo. The Roman temple in turn was most likely replaced with a Christian church with the introduction of Christianity into the Roman empire and Britain. Records tell of a church founded in around 660 on or near the site of the Cathedral. In around 875 the remains\relics of St Werburgh were brought to the city for protection from Viking attacks. Queen Ethelfelda (daughter of King Alfred) built a church here, probably to provide somewhere for the saint’s remains to be held in safety.

The Normans, in 1092, decided to found a monastery in Chester, under the guidance of Hugh Lupus, the Earl of Chester (William the Conqueror’s nephew) Hugh appointed Anselm, Abbot of Bec, a Benedictine monastery in Normandy in France to oversee the project. The earliest surviving parts of the cathedral date from this period. At this time, the cathedral of the diocese of Chester was not the Benedictine Abbey, but the nearby 11th century church of St John the Baptist (established, reputedly, in 689) The church still stands today, and is considered one of the finest examples of 11th to 12th century architecture in the whole of the UK. It wasn’t until 1538, at the dissolution of the Monasteries under Henry VIII, that St Werburgh’s Abbey (as it was known) became a Cathedral. Thomas Clarke made the transition of the last Abbot of St Werburgh’s Abbey, to the first Dean of Chester Cathedral. 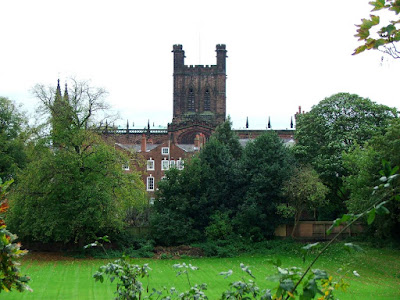 It is widely thought that there are no discernible traces of the 10th century church remaining…but numerous remains of the monastery built in 1092\93 remain. In 1636, space beneath the tower at the South West of the Cathedral, was turned into the Bishop’s Consistory Court. It is the only surviving original court of this nature to be found anywhere in the UK, and is accessible to visitors. By the 19th century, the cathedral was in dire need of refurbishment and restoration. Sir Gilbert Scott was employed at this time, to restore the building, and the overall spectacle that we see today, is largely down to the work he did. 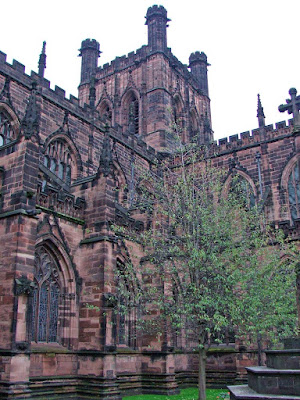 Check the link for further information on the Cathedral, including visiting details.

Posted by The Cumbrian Castle listing. at 13:19